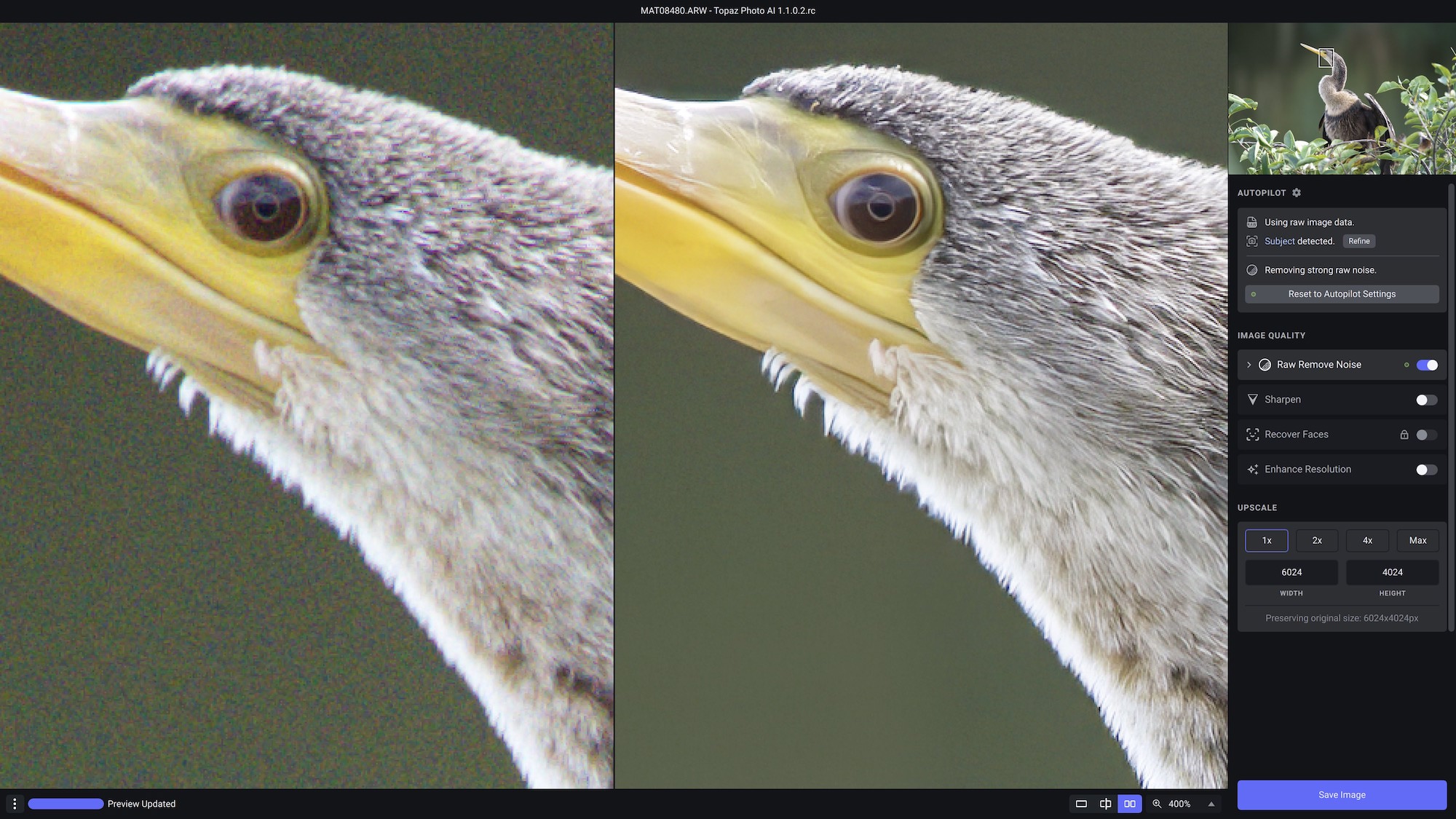 This is our largest release since… well, releasing the app itself! We have two new models and a major rewrite of our preview panel. There’s also significant improvements to our AI Brush, and of course your usual set of bug fixes and stability/performance improvements.

We’re working on many more exciting improvements! Instead of a couple bullet points at the end of the changelog, we’re transitioning to regular roadmap updates that go more in detail on what’s coming up next, where people can give feedback on the direction we’re going. Check out the first of these here:

You can now get Topaz Photo AI v1.1 with a new raw model, better AI Brush, snappier previews, better noise detection, and more. This is our biggest update since release; we’re really proud of it and hope you like it! You will see Topaz Photo AI continue to improve each Thursday. Topaz Photo AI’s core value is that it helps you maximize image quality on autopilot, so our team has been focused on both the quality and consistency of your results. To that end, right now we’re mainly working on impr…

An option to smart-rotate preset dimensions (and the current width/height options) would be handy, as some may want all photos to be the same resolution regardless (portrait as 3840x2160 and landscape as 2160x3840, rather than force all photos into landscape 2160x3840).

Sooo… We’re back to the scrolling moving the preview around instead of Zooming In/Out again???

Faster processing time … thanks for the update

@anthony.lawn still has the error “unable to open an internet connection”

As with prior versions, this image still shows artifacts in the grass left of the face. This happens whenever Remove Noise is on. It never happens with Remove Noise off.

I’ll upload the original jpeg to the dropbox link in a few minutes. Thanks. 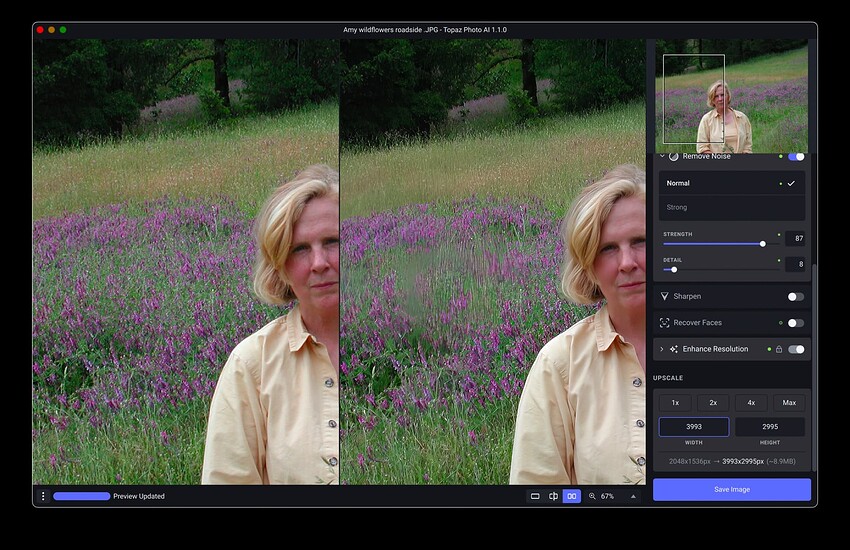 This is a bug that has continued from previous versions.
When upscaling specifies height instead of magnification
When multiple images are specified, the magnification is sometimes output as 1x.
often happens.
Also, .bmp is not displayed in the image selection dialog.

Can you add AI model for video snapshots upscale please ? The current models work really bad with video snapshots ! And unfortunately current versions of Video AI dont handle .png or .jpeg video snapshots files too for some reason … ?! Thank you in advance !

I just did a fresh install of 1.1.0 on Win10. Now my Denoise AI, Sharpen AI, and Gigapixel AI no longer run. They look like they are starting, but I just get a white screen with the app title bar at the top for about 1 second and then it is gone. I am very unhappy.

Feature Request - I use Lightroom, so use Edit In Topaz Photo AI. When there’s an update available, I get the pop-up, but once the image is processed the program auto closes. Why? Why not allow the program to keep running, so that after I process the image, I can then do the update. Instead of having to manually re-launch the app and update it. I’m on a powerful Mac and don’t mind having Photo AI open all the time, I have no need for it to close after every use.

Can’t open TPAI as a Photoshop plug-in, every time I try to open an image from Photoshop, Photoshop crashes.

Best update so far! Worth waiting 2 weeks for. AI brush now works as expected even after resizing the preview which now updates much faster. The denoise function seems to be less aggressive maintaining detail in stonework for example. I would still like the ability to use a non-AI brush but the size selection etc makes it much more useful. Thanks for this update.

Or allow us to configure an auto-update - when an update is available, automatically download and/or apply it. 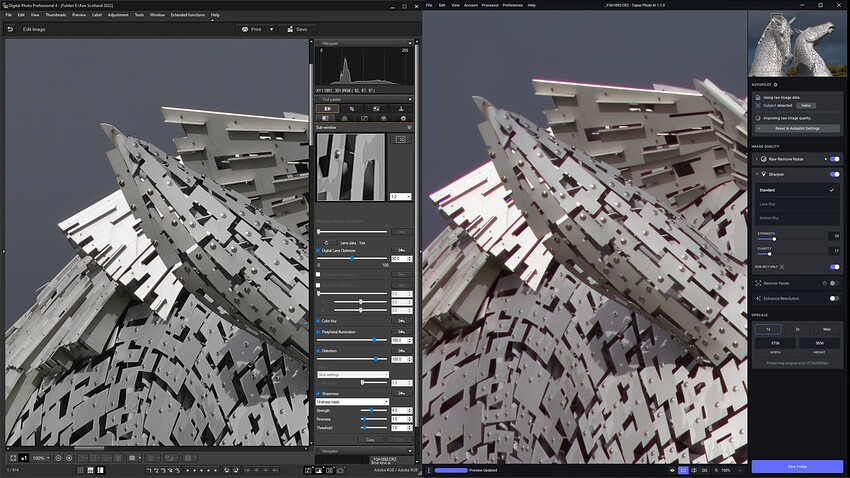 What has happened to Face Recovery since Version 1.0.5?

I bought Topaz Photo AI after trying out the first release…I was amazed by the quality of images created by the software…It seemed almost magical to me what the AI could achieve. I have been downloading the updates with great anticipation each week since then, but after release 1.0.5. the face recovery seemed to simply cease to function. I have a large library of older digital photographs from the early days of mobile phone photography and it was the improvement of these images that thrilled me so much when I saw Topaz PAI. Many of the images I have are around VGA size with pixel dimensions like postage stamps in comparison with recent digital images…but up until release 1.0.6. I had astonishing improvements in both quality and scale. 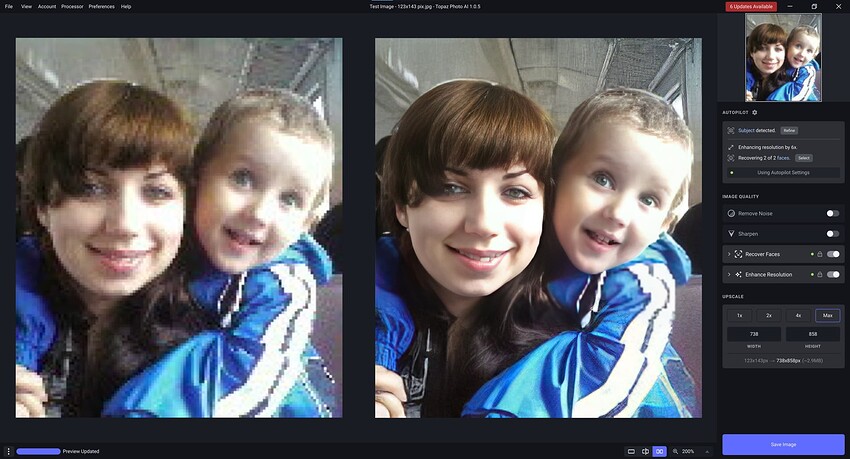 Topaz Photo AI 1.1.01920×1040 167 KB
These two screen grabs illustrate the results from release 1.0.5 and 1.1.0. Comparison of both releases provides quite noticeable differences though both were created using default Autopilot settings and scaled to 200% in the preview window to show the difference between the original image and the new PAI creation. Whilst both AI images are far from perfect, with odd artifacts popping up in the image, the image from 1.0.5. is far superior to it’s later version. So for the last 6 weeks, I have been rather disappointedly having to uninstall the latest update and reinstall version 1.0.5.
Can one of the Devs please shed some light on why this is happening? 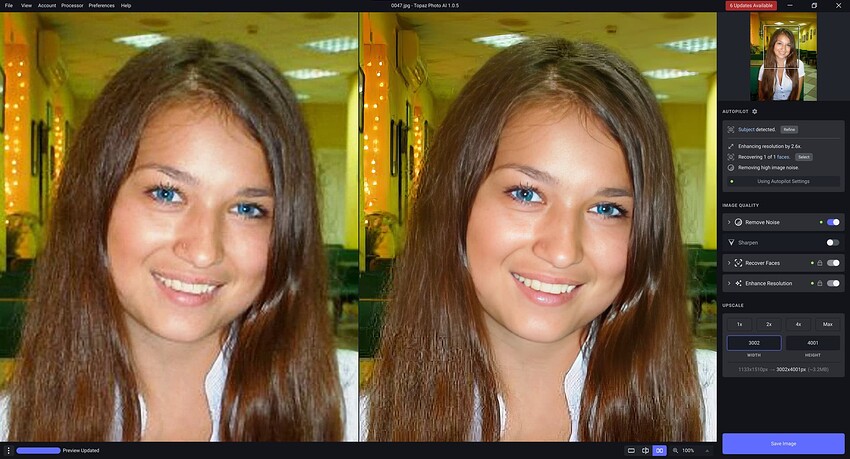 0047 - Topaz 1.1.01920×1039 183 KB
The second set of comparison photos also illustrates the common, box of enhancement, result around the face, which outlines the enhancement area…in a lot of my images it’s not too noticeable, but in some cases it can ruin an otherwise beautiful photo. Feature request… Can a face area selection tool be made available to manually scale the size of the area of enhancement to include long hair etc…I have had many cases where the enhancement area has stopped below the mouth and left a very pixellated chin with an otherwise perfectly enhanced face.
Answers to my questions and future correction to these issues would be great…This software has the ability to create some stunning imagery and banning the huge pixels from my older photos…delights my eyes and enhances my memory…Keep up the good work guys!

There is a major problem with Photo AI when the system has multiple identical GPU cards. If I run an image using the CPU, then Photo AI works fine. If I attempt to use one of my two Nvidia GTX 1080ti graphics cards, I get a model loading error. Needs fixed ASAP

Bug - Unfortunately it is still impossible to use PhotoAI from Capture One if the filename contains any local characters like German Umlaute (üöä) sind the encoding of the filename which is given to PhotoAI is not correct. I have reported that quite a while ago and these things should be an easy fix. So I hope it will get fixed soon!

Preview is missing while processing… but in overall first impression is highly positive!
I can even minimize window in middle of processing now, and default settings aren’t so hugely over sharpening image. Also some skin artifacts are gone now.
Thanks!
I know how everything in code can mess up something else, so I really apprechiate your effort.

v. 1.1.0. suffers from the same problem like gigapixel where parts of the image are improved and others are just a blurry mess.