In case you didn’t see it last week, we have a new quarterly roadmap available! It’s a great place to voice your feedback not directly related to this specific update:

Can you please make an option to denoise only the subject (as it is with sharpening).
It would be very very useful. Thanks in advance.

I just installed 1.1.8 on my M1 Mac Mini 16gb. I downloaded the install file from the link above. I already had 1.1.7 installed. My first photo I processed in 1.1.8 failed with an error at the bottom that said: Could not open model. First time to see that error from any version of Photo AI going back months.

Installed from update within windows program, no issues.

Thought I would try a sketch I did years ago to see if it would do face detection. 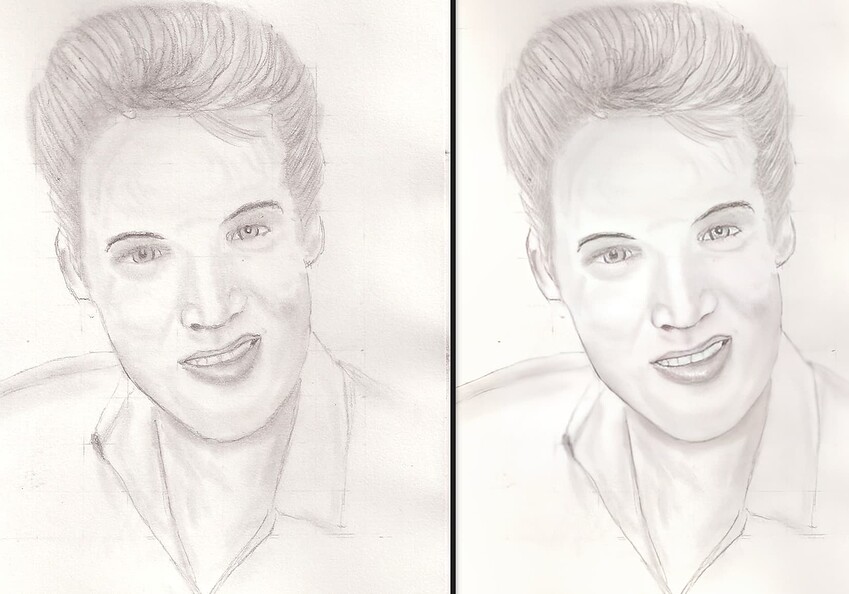 It also worked well on this image 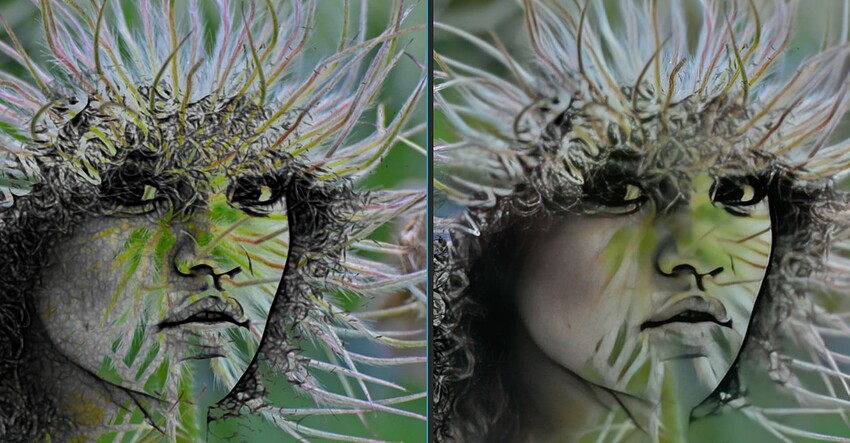 I just installed 1.1.8 on my M1 Mac Mini 16gb. I downloaded the install file from the link above. I already had 1.1.7 installed. My first photo I processed in 1.1.8 failed with an error at the bottom that said: Could not open model. First time to see that error from any version of Photo AI going back months.

I got an automated reply from Topaz that said they are closed on 1/20. I suppose the earliest I may get a reply then would be Monday 1/23. Anyone have any ideas? I cannot use 1.1.8.

Hi Henry - could you send me a screenshot of the error and your log files, please? You can find the logs in Help > Open Log Folder. Thank you.

Hi Yazi: I already sent a support request a few hours ago and I included the log file.

A few minutes ago I deleted 1.1.8 and then using the same 1.1.8 install file I downloaded earlier today I installed it again. Now the standalone is working. Both installs were reported to be successful though.

Ever since I installed Photo AI for the first time a couple of months ago I had merely downloaded the weekly update install file and run it. I have never deleted the previous version of Photo AI first though. I never had any problems, but maybe this is not the right way to do it? Should I uninstall each week before installing a new version?

I have an observation about Photo AI, and it’s not a new thing with this version. Recover Faces usually wants to give blue-eyed people brown eyes. On some portraits, it’s bad enough that I have to turn off Recover Faces because of it. That’s a shame, because it generally does a good job of adding more detail to faces than enhancing resolution on its own. Couldn’t it sample the eye color and use that, instead of assuming that all eyes are brown? 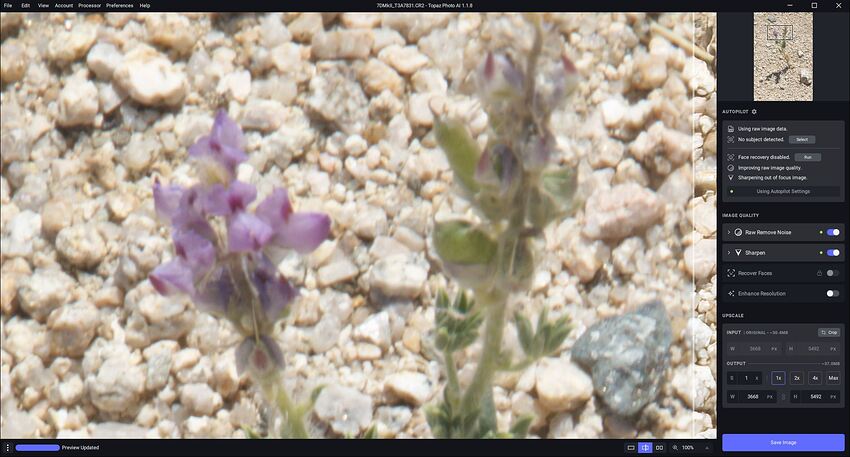 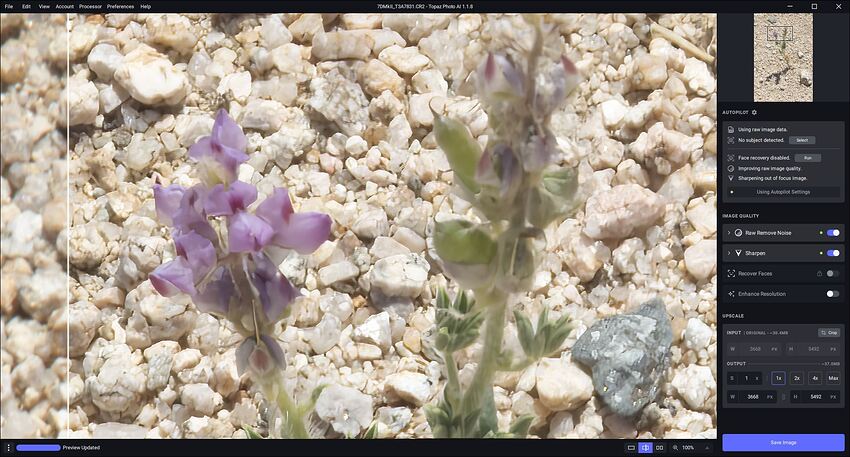 Then tried the new Cropping features. My experiences: (there may be some “issues” to sort out by the devs - unless my experience was unique):

Same PC specs as immediately above.

Am seeing the same thing as prior releases. When Sharpening is used in PAI (plugin) I see a significantly more noticeable ‘hop’ (aka, pixel shift) after the image is processed and returned to the Ps layer stack (and I turn off/on the layer Eye icon).

Also, PAI Plugin introduced all sorts of artifacts into the image (it’s as if it copied all the cross-hatched windows in this Miami (FL) apt building and shifted them all over so they were overlaid and repeated into the blank spaces on the glass, balcony slider doors throughout the image - click on the AFTER PAI & BEFORE to see what PAI intro’d… it also seemed to wash out the vibrant greens in the image (probably b/c it overlaid all those wht cross-hatches). 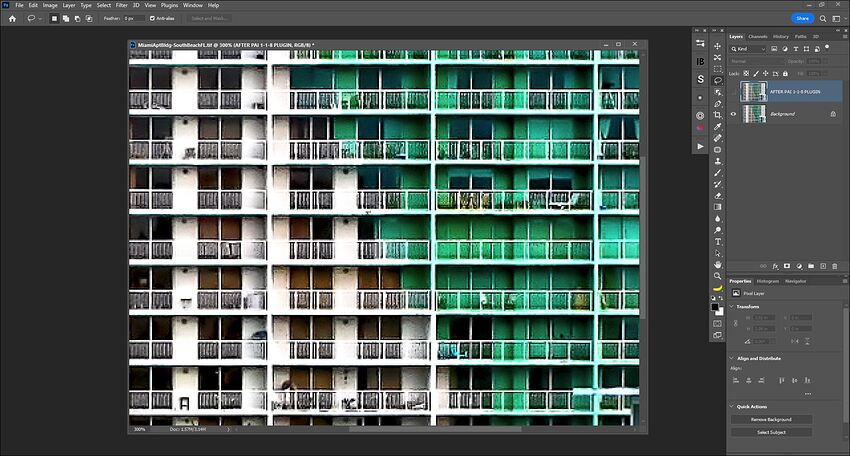 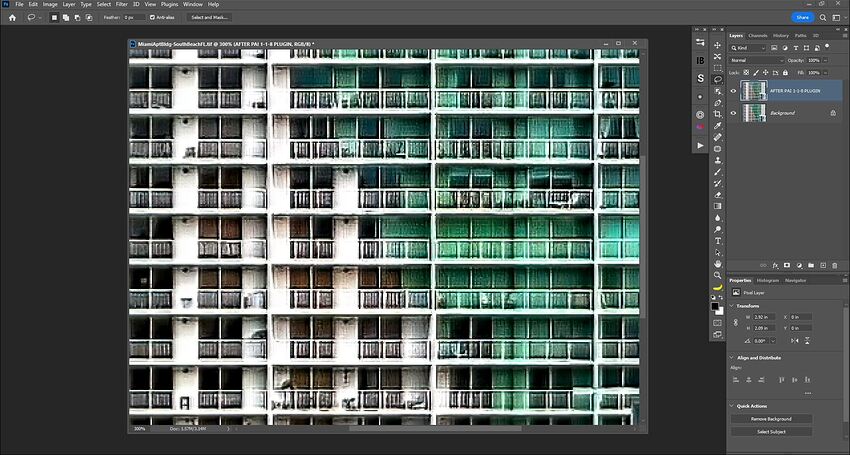 Using the native RAW application vs importing a TIFF is changing the exposure. This is limiting in the workflow. When I take the DNG back into LR, using camera settings, it has Sharpen set to 40, thus apply more sharpen. At least the DNG file let’s me use camera settings 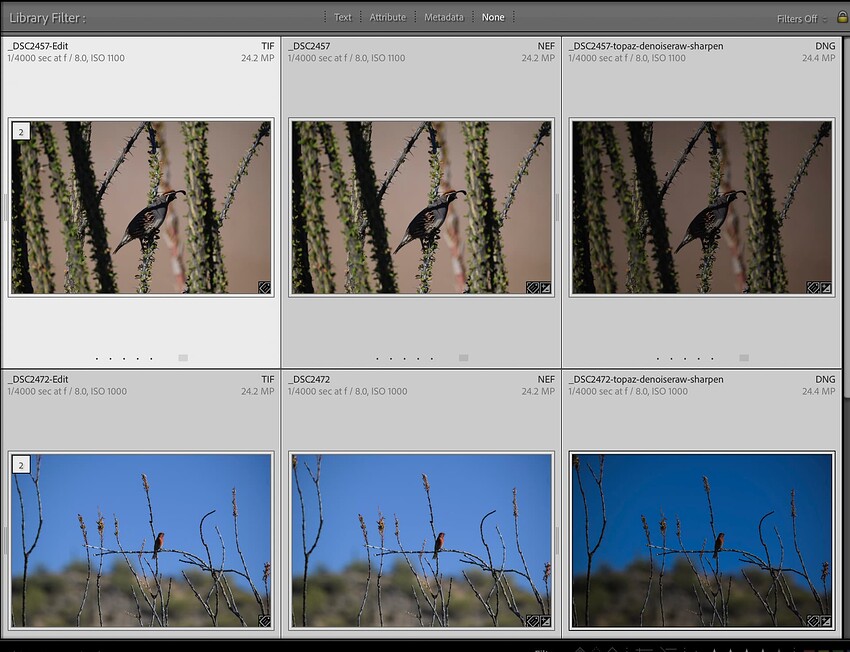 Hi Henry - thanks for letting me know. You don’t need to uninstall the old version before updating to the new one. If you were on a fairly old version, it may haven’t had some update improvements we added to later versions. Please reach back out if you run into this again and we can dig around it further. Thank you!

Hi! Can you please send me an image or some of the images where you run into this? We constantly work on model improvements and having more samples of such issues would be of great help. Please let me know if you’ve sent the files through Dropbox. Thank you.

Hi Michael - what’s your Nikon camera model? Can you send me the images through Dropbox? We can look into this when we improve our camera support in the next cycle which we do fairly often. Thank you.

I will upload a Z9 batch as well. There are color shifts there; not so much exposure shifts.

I’d love to see an option in the preferences for automatic removal of photos after processing. It is a bit tedious in the workflow to close the pop-up, close all images, and then confirm.

Thanks for your consideration!

When you have custom selected, there’s a button to lock the aspect ratio so that you can resize while maintaining the custom aspect ratio you wanted. If you un-lock it, you should be able to change the crop rectangle free-form.

There is an issue with the genrated DNG files. They can not be read by Lightroom or Photoshop. They indicate corrupt DNG file. Tiff files are ok. Photo AI can however itself read back and open the same DNG file .

Same problem with Photo AI 1.1.7 but it was fine in earlier versions.
I have fully updated Windows 10 Pro and Photoshop/Lightroom

When I generate a DNG file from the latest Gigapixel AI 6.3.2 that is working ok.

When you have custom selected, there’s a button to lock the aspect ratio so that you can resize while maintaining the custom aspect ratio you wanted. If you un-lock it, you should be able to change the crop rectangle free-form.

I’ll check that out today, Anthony.

I might have missed the “?” Tip that said to do that. I’m not exactly grasping what’s needed (but I just woke up & ‘tropical’ CA is freezing…so I’ll get a coffee, do my Covid era home workout circuit then try again when mentally functional). Thx!

Are we not allowed to change direction mid-stream, if we don’t like how a chosen crop is working out & want to try another option instead?