Learn more about the new features in DeNoise AI 3.3

I just updated DeNoise 3.3.0 on my iMac and use it as a plugin in Lightroom Classic.
After I make the denoise edits where it looks great in DeNoise after I save it back to lightroom no changes were made - it looks exactly like the original.

I have just installed the new version and cannot make it work with Lightroom Classic. It doesn’t open in external editor mode. That means it doesn’t save changes to the existing file name and pass me back to Lightroom. I only get the option to save a new file. I saw the point above about external editing and something called lrtemplate but I have no idea what this means and there is no explanation. I cannot find “the included lrtemplate” whatever that is. I tried to select the external editor as the target application in Lightroom settings, but it is not possible. Because it is a shortcut not a .exe file, Lightroom seems to read it, see the executable target and default back to the main Topaz Sharpen .exe file. The update has broken the functionality that I used to use and there seems no way around it.

You need to import, via sync folder, to get the output from Denoise.

I may have found a new issue? Whenever I process the image in denoise, the image does not update in lightroom. I use topaz as a plug-in, and usually, as soon as the image is done processing, it pops right up back in lightroom. Now, a new file is made, but no changes in noise level occur.

Another problem, on PC, using .CR3 files from Canon R5, RAW mode, saving new file as DNG, when I try to import that to Lightroom Classic it says “profile missing”, the colours are all wrong and I can’t select anything other than “Adobe Standard”. The saved DNG appears incorrect and so RAW processing mode is useless to me.

This update makes things SO MUCH more difficult. The export process is TERRIBLE! please go back this update is really the worst.

me neither. I have a deadline and I auto updated what a mistake!!

Sorry correction, the file giving the “missing profile” message is from an M6 Mark II. With the R5, it is not quite as bad, but still doesn’t work. I saved the processed file as DNG again and imported to LRC. There is no “missing profile” message, but the colours are wrong (exposure seems to be reduced) and I cannot select ANY Adobe profile. The only option given is “Color”.

This means that RAW processing mode is completely useless. The profile of the camera is not respected and not saved, making the output completely unusable on PC with my Canon M6 II and R5. Together with the problem of not being able to use external editing, this is very frustrating. What a backwards step.

This release has broken my workflow. I used to be able to send a TIF file into Denoise from Exposure X7 and Denoise would return the result overwriting the same file. Now it insists on creating a separate file - I neither need nor want this behaviour and it is inconsistent with your other applications. Please restore the ability for DeNoise to return the result with the same file name and type.

Also, give us the preference for a default model (or use the last model used as in 3.2) - I usually don’t want to use the RAW model and it’s a pain having to change it every time.

Disappointed with this release.

IMHO this has broken DeNoise as a usable product for me.
In addition to completely disrupting my Lightroom Classic workflow, the images generated from 3.3.0 seem to be significantly altered beyond just denoise/sharpen. White balance has been automatically adjusted, exposure significantly altered.
As for workflow, it is not just cumbersome in LR, but fraught with potential error:

I tried playing around with settings, and thought removing auto-appending processing model and default name suffice would result in original file being overwritten as in the past, but instead results in “-edited (1).”

Perhaps these types of features can be added to preferences and activated as desired instead of automatically imposed? I am sure there are many people who appreciate these features, but as an existing user it is extremely frustrating.

Me too - beyond frustrating.

I agree, this update has totally wrecked my workflow and has resulted in the same issues mentioned in this post. I am very disappointed with this release which has made Denoise AI unusable for me.

Please add de-artifact mode! This model could work similar to the 1x mode in Gigapixel AI + denoise/dehalo.
Here is Denoise and Gigapixel results. It would be nice if you could do the two in one without any artifact and haloing, grids. 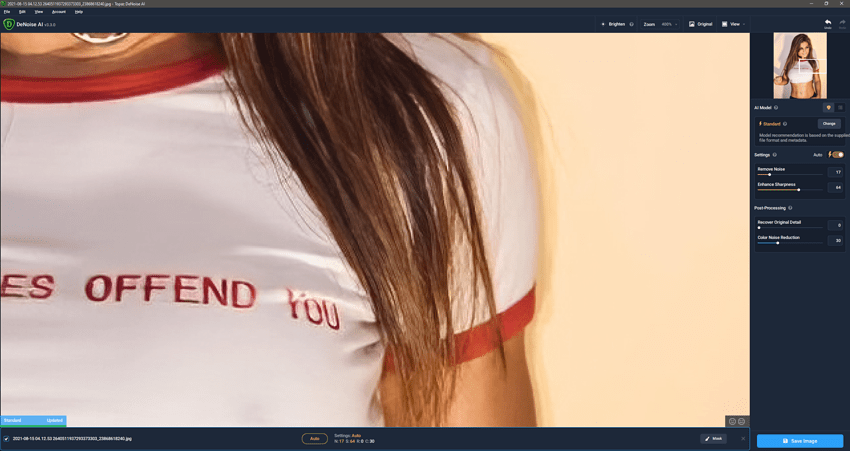 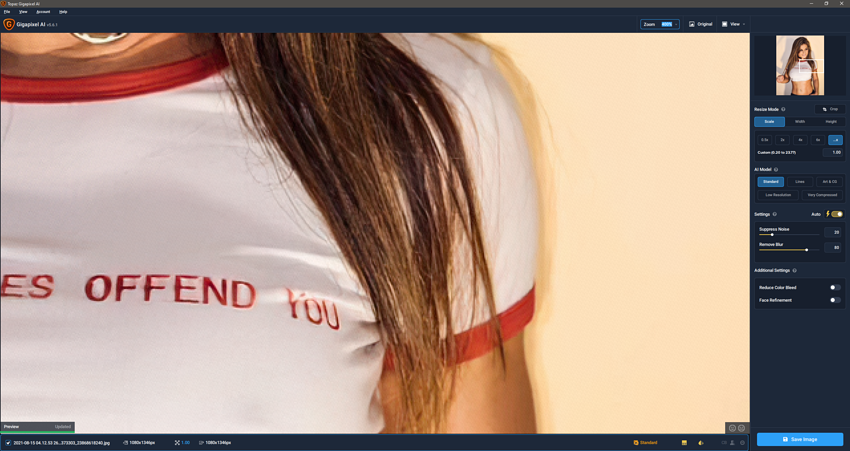 The last version worked perfectly.
I have been having trouble with Gigapixel in not processing my files and now with this new version I am having exactlky the same error message that “Processing Error, please try again…”
The last version of DeNoise worked perfectly.
I need to look at these messages BEFORE I upodate any software from now on…
I have a picture to get out and cannot until this is fixed.

I figured this one out (for me anyway)…
Cause: Topaz installer is not seeing the LR option for where to store presets.
Fix: In Lightroom, you have the option to ‘Store presets with this catalog’ (Prefs/Presets). If you have this enabled, the [TopazDeNoiseAI.lrtemplate] file sits in a folder that is ignored by LR (C:\Users\Username\AppData\Roaming\Adobe\Lightroom\External Editor Presets).
With LR closed, move the new [TopazDeNoiseAI.lrtemplate] file to the External Editor Presets folder that is in the same location as your catalog.

You are a genius. Problem solved. Thank you very much but no thanks to Topaz.

Now if only the RAW mode would work properly (get the colour and exposure right and store profiles properly). It remains useless for me with 3 different camera models from two makers.

I watched your video which was well made thank you. Using RAW mode you were able to select any Adobe Profile after re-importing them to Lightroom, and your colours seemed to match. On the PC, using files from Nikon D810, Canon R5 and M6 Mk II, the imported DNG files have very different colour from the original, and I cannot select other than “Color” or “B&W”. Adobe Landscape etc are missing. I wondered if you might have any idea why?

Hi,
Installed Denoise 3.3.0, unfortunately can not open Canon RAW files (CR2 one from eos 7D II)
Sorry I can’t attached a file to this message.
Regards.
Have a good day.
Michel Smolak