Note: This is the last version with support for MacOS 10.12 Sierra

6 posts were merged into an existing topic: Ongoing product value and paid upgrades

I can’t disable discrete GPU. I wan’t to use the CPU only mode to get the better results.

It looks like this is a UI only bug. If the “Allowed graphics memory consumption” button is greyed out in the Preferences then you’re using CPU mode.

Thanks for the heads up, I’ll get this fixed for the next update.

Great. I still wait for a response of the support to order another year of extension to my life time free upgrade and upgrades yet. Can’t wait. Edit: Got my extension!

I love the new look. Very elegant. I hope this will also be implemented to the next DeNoise update.

It’ll be implemented in DeNoise, Sharpen, and Mask by the end of the year

The right pane with the tutorial was annoying, IMHO. It gave the software a “Hobbyist” look. Now smaller at the bottom it’s more refined. The round edges of each section are elegant. Great job of the designers. Calibration is also extremely fast as opposed to previous versions.

The new “Compressed” AI model is not working for me. A “generating preview” message flashes for a split second and in the preview I am presented with the same image as before. I tried with both GPU and CPU mode. Moreover, when in CPU mode, I am getting a small version of the same image overlaid inside the big preview (screenshot below). Attached are also my settings.

UPDATE: I uninstalled the program and downloaded the full 2GB offline installer of version 5.2.0 from the Downloads section and then I installed it back. It seems to be working now! 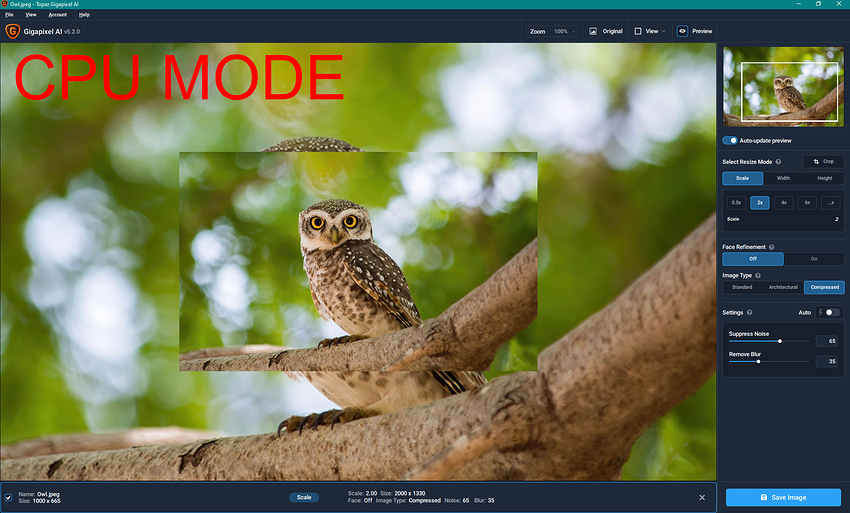 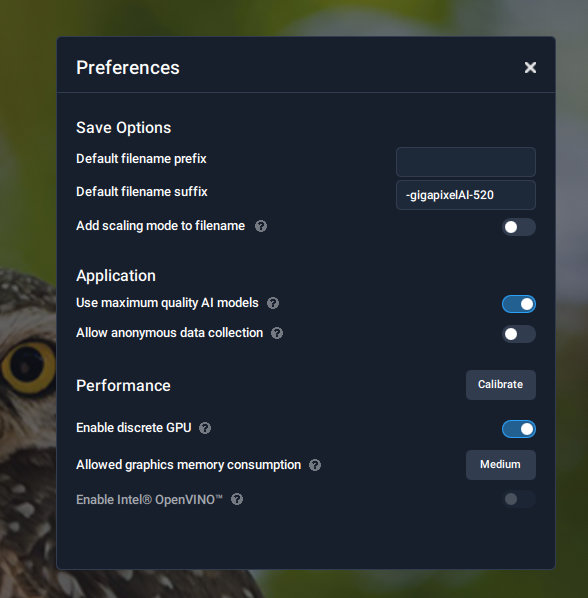 One display bug I found: The percentage is hidden by the processing details at the bottom

Gigapixel is my favorite image correction app ever – and I’ve used quite a few!

See some of my own examples on my blog, posted today.

A fresh coat of paint (UI change) is not a “major feature” in anyone’s world but Topaz Labs.

Just curious if anyone has thoughts/experience on what makes the most sense (and best quality) when it comes to using Gigapixel and stylized filters. Is it better to apply artistic/stylized filters before or after enlargement (Gigapixel)? Thoughts?

The issue I had with Gigapixel producing distorted output when OpenVINO was enabled is SOLVED!

THANKS so much to whichever developer(s) looked at this and fixed it!

Downloaded and installed without any problems. Like the new look and the speed improvement.

"GPU image quality has artifacts not present when processing with just OpenVINO or CPU. "

Are this NEW artifacts - or the “old” artifact we have for a while like the “red-stripe bug” ?

I will wait until GPU quality issue is fixed before considering upgrading.