Another release of Topaz Video AI is now available.

Some users may experience reduced performance compared to 2.6.4

Even more? How bad can it get?

Any progress on this…

Still only one audio track (first) is being copied from source file.

I had hopes that this is something very minor that can be resolved quickly, but just lost the 30d refund period and there is no human-friendly way to reach the support really.

Thank you for all your hard work. Can you explain the audio settings please.
Only auto works for me

The drop in file don’t work as well yet on version 3. It worked on version 2

Stand corrected this new version fixed it thank you

It works on my Laptop but not on my main pc

So we’re still doing release versions that are lower numbered than the previous beta? :\

you’re a beta tester, so you have access to the 3.0.7.0b thread. one of the developper, Suraj, just replied to this question and some other. I don’t know if i’m allowed to quote him here but it would be good that someone from the team does it here then.

My point is, that comment about adding a Pause option was near 12 months ago. Beta 3.0.7.0.b does not have a pause button. I purchased this software on release of 3.0 and it includes 12 months update rights. I feel they will have to extend this for everyone as the current versions are still raw beta versions and I cannot process video as required. Slow, crashing, failing to start exports with unknown errors. Beta software is not Production ready release for purchase. Feeling like guinea pigs…

you asked a question on a specific thing. I just told that someone replied about it, that’s all. I’m not the one to tell the other things.

Great job. I have a question. I read the Support thing, but the definition of “Max Processes” is kinda vague.

Should I set it to 2? Which is the default option, or more if I have a 4 core CPU?

What will it exactly change in terms of stability / performance? So far I have only tested it with a HD 630 IGP and no difference was found, but it´s a low power GPU anyway. Thank you!

Just in case, I render videos one by one, so no batch rendering is used in my case.

With 3.0.6, the entire preview is black now, with no apparent way to get it back.

The release notes say something like ‘Autoplay disabled in preview’, except I see no way to enable it again (or whether it’s even related). At least 3.0.5 showed something in Preview

GPU high load is not always the best performance solution.

Output quality at 200% in both cases no remarkable difference

Is there ever going to be a ‘Turbo’ option for those of us that don’t need or want to do batches of videos?

Basically, a mode that will allow the software to use as much CPU/GPU and RAM as the hardware will allow to do do a single video file as quick as possible?

I really like my software to fully use the expensive hardware I purchased to "make things faster! in the first place!

It’s frustrating to work on a 10 SD minute video and see only 20% of resources being used and 30 minutes on the clock to tick down.

When MPEG2-TS is processed with ddv3

I’m having a hard time creating videos since October.

Thank you johnnystar from the previous thread 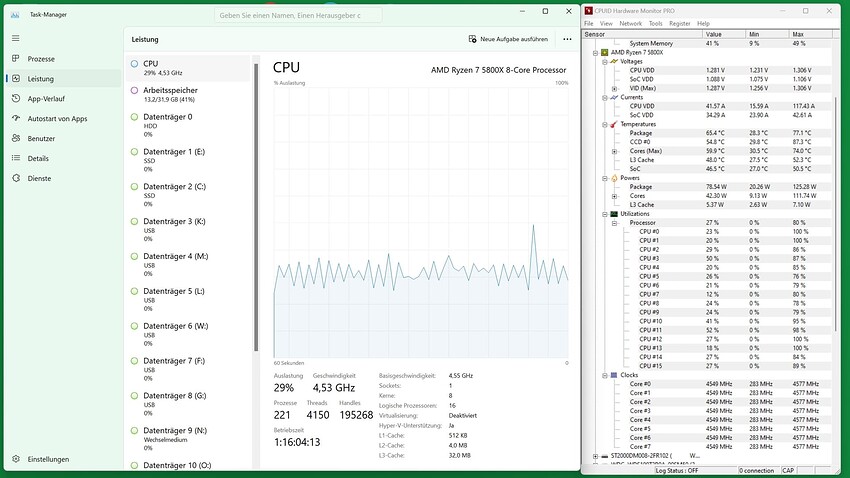 TVAI306resources1920×1080 154 KB
As you can see from this screenshot (Windows Taskmanager + CPUID Hardware Monitor) a PC with 8 cores (=16 processors) does load individual processors up to 100% while the average in total is below 30%. It all depends on how many parallel processers are requested by one vector/tensor task to get finished before the next can start.
daglesj (daglesj) December 7, 2022, 12:15pm #21

Yes but can I have an option to use as much GPU and CPU as possible on one file?

That’s all I (and probably a lot of casual users) want.