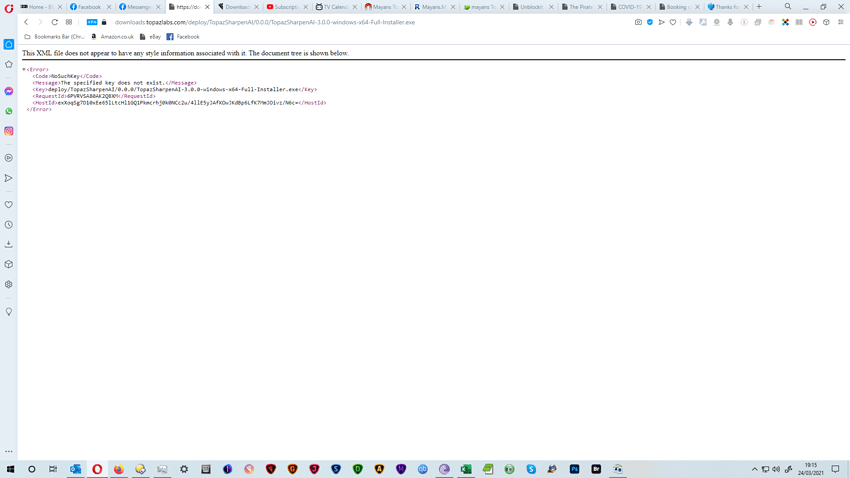 Fixed! You can try it again now.

Needs to be fixed: big squares in preview.

It shows a blank white window for less than a second and exits immediately. According to an x64dbg log, it loads the DirectX Software Renderer (d3d10warp.dll) and immediately unloads it 4 different times. The log ends with a C0000005 access violation.

A similar problem existed with Video Enhance AI 1.7.1 and was fixed in version 1.8.0. The latest beta of VEAI continues to run on the same system using the DirectX Software Renderer for the UI. OpenVINO works well.

IMHO if you’re going to support OpenVINO then you should support GPU-less machines, otherwise there’s not much point to using OpenVINO if a GPU is required to run.

I GOT IT TO WORK.

I made the incorrect assumption that you are using the DirectX 12 Software Renderer for Windows 10. 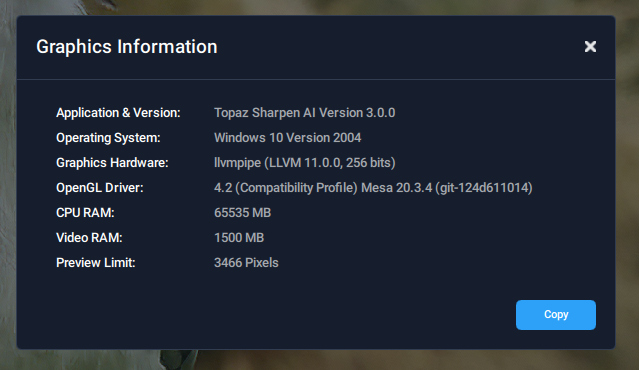 So, it simply means that it needs to use the same setup that it always has on Windows 10. It needs MESA copied into the application directory. It also no longer calibrates… the user needs to go into Advanced Settings and change the AI Processor to CPU. It will then work for OpenVINO on GPU-less machines.

I am EXTREMELTY SORRY I wasted your time with this. All I needed to do was set it up like I always have in the past, on Windows 10.

Just to document it, here are the full steps:

𝟣. The following environment variables MUST be set:

Set the above two variables for BOTH User AND System.

At the time of this writing I downloaded mesa3d-20.3.4-release-mingw.7z. (Later versions have issues with missing Vulcan dll files, so it’s recommended to avoid them for non Vulcan applications until they have those issues fixed. I recommend 20.3.4; earlier versions should also work.)

Extract the file. Install and use the freeware 7zip application to do so, if you need it.

You only want two files from the archive: x64\opengl32.dll and x64\libglapi.dll. Copy these into the Topaz application directory. So for Sharpen AI, copy them to C:\Program Files\Topaz Labs LLC\Topaz Sharpen AI, if you used the default install location.

3. Run the application (Topaz Sharpen AI), it should now load and use the MESA llvmpipe software renderer. You can confirm by going to “Help” -> “Graphics Info”. It should look like the above screenshot, and show that it’s using llvmpipe.

4. It appears that newer Topaz applications no longer run “calibration”. They’re set to use GPU by default. If there’s no GPU, then the application will just exit when the preview tries to run. If the preview is set to “auto” (which it is by default) then that means it will happen as soon as an image is loaded. So you need to go to “File” -> “Preferences” and set “AI Processor” to “CPU”.

𝟧. The Topaz application should now run on a GPU-less workstation, as well as a VM/VPS.

I haven’t checked everything yet, but it’s working for Sharpen AI and Denoise AI. I believe it will work for all other Topaz Applications except Video Enhance AI, which should run immediately after installing without needing to copy files into the application directory. I haven’t tested to see if not having the above environment variables (MESA_GL_VERSION_OVERRIDE / MESA_GLSL_VERSION_OVERRIDE) makes a difference for VEAI, but I don’t think that it does.

There are some versions of Topaz Applications (again I haven’t checked everything obviously) that run without needing Mesa files copied into the application directory. Denoise AI 2.4.x and 3.0.0 “Legacy” on Windows 7 are like this. They use an old version of llvmpipe (5.0) which appears to be built in. I’m not certain in these cases if environment variables need to be set (MESA_GL_VERSION_OVERRIDE to 4.2COMPAT and MESA_GLSL_VERSION_OVERRIDE to 420), but I suspect that they do. I haven’t tried removing them and then installing and running Denoise AI 2.4.x or 3.0.0 “Legacy”.

Again, I’m VERY sorry for anyone’s time I may have wasted with my incorrect assumptions about Topaz applications using the DirectX Software Renderer.

I couldn’t get it to load!

Upgraded to 3.0.0. tonight. It loads fine but when I try to use it, it crashes as soon as I go to update the preview. It leaves the small screen and I have to press esc to get rid of the popup. I have downgraded back to 2.2.4 and that version still works fine. I have tried it direct from the program and from Photoshop but it does the same. Running W10 on Intel i5.

Does not appear to support hyper-threading on Mac. I use a 10 core iMac which gives me 20 hyperthreaded cores. When using CPU only seems to be using 10 of the available 20 cores. Now really slow in CPU mode. VIdeo card performance seems to have improved but still doesn’t seem as fast as previous versions when using 20 cores!

Just updated to 3. Program froze when I went to quit. Subsequent launches cause it to crash on auto preview. MacOS 10.14.6.

V3.0 crash appears to be something to do with the AI Processor selection in Preferences. If i leave it with the auto select of the Intel® 530 Graphics Display Adapter it crashes. Change to CPU and it works, except that it is very slow updating indeed.

This new Update is pure garbage. It makes Halos around edges like Photoshop does. Also sharpening options are simply very limited comparing to older version. I’m going back to version 2

Completely agree. Just tested it and new algorithms are worse than some low budget sharpening filters, leave lot of halos in motion blur mode and others as well, which is the whole point of using Topaz product to avoid halos. And in normal sharpen mode which they now call I think Too Soft as if we are third grade kids, the slider moved to maximum barely does any sharpening and when set to “very blurry” it produces weird artifacts around edges. This is a disappointing disaster of a release. The new AI algorithms are big step backwards. Who tested this? Was there no feedback.

I went through the motions of installing on Mac, but the app is nowhere to be found.Latest installed version is still 2.1.3 from May 2020. What am I missing?

I have not been able to get Sharpen Ai to run on my work station since December 2020. It will work on two a lower grade PC’s. I tried the lastest 3.0 and it still will not launch. None of the new Ai products were working.

Just because it uses AI doesn’t mean I want it featureless. Give me enough control to instruct the AI engine to respond to me. The results from the latest upgrade are lackluster at best (halos/poor sharpening/loss of depth&contrast.
Also, are we going to be held hostage:
– While not logged in, or if your license is expired, your image will save with a watermark
– Users who own the product should be able to use it offline without a watermark given they’ve logged in once and don’t log out

Program working ok, but processing image is extremely slow now. What I used to be able to process in 3 minutes now takes 18 minutes. Other than installing new version, I have not made any changes. I am running on PC with Windows 10. Preferences Performance section shows AI Processor as NVIDIA GeForce GTX960 which is my card.