Should not there be difference in quality. They only have different processing sizes. Choose whatever gives best performance.

Today I did a test by reinstalling Gigapixel properly. Since the template folder was over 19 GB because I was regularly doing updates over it, doing a clean install and then downloading all the templates for the GPU and CPU, my template folder is now 4.97 GB. I have gained over 14 GB.

So in conclusion, it would be good for the developer team to add a function to remove old templates during the installation of updates that bring its share of new templates.

Hello, I have had this problem as well!

Very impressed So far, the next version cant be far off I cant wait to see what it’s like .

Can image quality depend on graphics card performance?

now i’m doing the crop outside of Gigapixel until it’s fixed ! Thx !

Hey Marty, In the latest beta version the crop issue is fixed. They still need to add rotate to it so I hope they do, but the cropping can be done on each picture differently. Probably will released in near future.

Hi, is the next update being released soon ?
I’s been one month and a half, since 6.1.0, that Nvidia series 10 GPUs try to load TensorRT model that are not compatible with those cards ! Apparently the problem has been fixed with DeNoise 3.7, so we are expecting an update for Gigapixel very soon ?

Also, as someone has also stated on this forum, this is false advertising saying the following (quoted from the official website, and is literally the first sentence of the article) :

I’d like to point out that users who have computers containing NVIDIA GPUs that are 30, 20, or 10 Series will experience notable performance improvements. We optimized the library used for NVIDIA GPUs from DirectML to TensorRT.

NVIDIA series 10 cards don’t have any Tensor cores, only the 16, 20 and 30 series have them.
Something is very wrong with the current Gigapixel version (6.1.0) as it tries to load Tensor models on incompatible GPUs and causes severe slowdowns and freezes.
At this point it is faster using the CPU… Come on.

You should also raise a support request at the main website and upload the logs. The location can be found under the Help menu.

Some funny thing happened a moment ago. I started processing, then cancelled it, changed some settings and started processing again. Now Gigapixel shows two progress bars, just like it was processing two files at once though it processes one file at a time. Not a big issue, it just looks strange 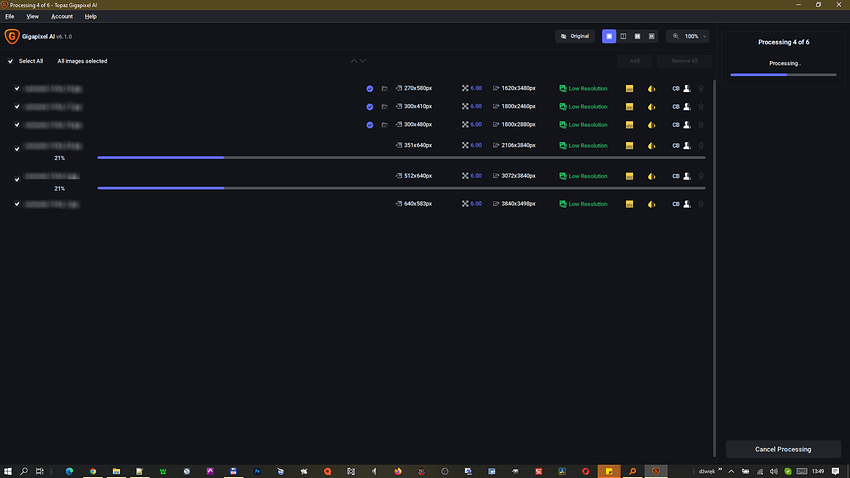 I am getting severe artifacts in the top left corner: Some tiles did show up for him.

Thomas, it reminds me of the issue i have with VEAI with block compression appearing on dark part, could it be related ?

I can’t say, but it looks comparable.

These artifacts are very prominent, to the point of making this marvelous magical software basically unusable, unfortunately, in darker blue colors - jeans, etc.