As a former Denoise 6 and AI Clear customer with an older account I just got the e-mail for the free upgrade.

So OK now I get Denoise AI but it’s almost useless without any batch processing. I can’t imagine saving hundreds of images one by one.
Why can’t we load several images like the other Gigapixel, JPeg to Raw AI applications ?
In Topaz Studio the batch processing only works with adjustments and not plug-ins.

I work with TIFF files and use Photoshop. The process I use with Studio and Adjust is to have a PS Action which invokes them and applies them to layers. I use the PS batch feature to run the action on all the files in a directory.

I have not (yet) tested this with DeNoise, since I just downloaded it today, but I would guess that this will work with DeNoise, too.

When you have a stack of images, this is a big time saver. Well…at least you don’t have to be there while you let your computer run over night

Might be worth a try while you wait for an upgrade…

I agree that Denoise AI needs batch processing capablility. Adding this feature should be highest priority.

I recorded an action in Photoshop using settings of 0.2, 0.2 and 0.5 for Remove Noise, Enhance Sharpness and Restore Detail respectively.

When I played the action back, the settings used were 0.2, 0.2 and 0.1. It seems that the Restore Detail reverts to its default setting although the other settings are maintained. 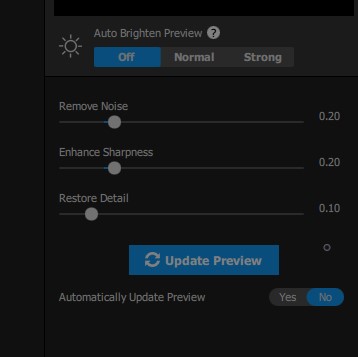 So unless you always want the default setting for Restore Detail, batch processing to Denoise AI using Photoshop actions doesn’t currently work. As Denoise AI doesn’t remember the last used settings (which Studio does), there doesn’t seem to be a workaround for this.

Hopefully we can get a fix soon, at least for the Restore Detail setting to be saved in Photoshop actions.

I agree! This should be a high priority!!

I totally agree that Denoise AI and Sharpen AI should have the same batch processing functionality as Gigapixel, which now can even handle image sequences. The interfaces appear to share a lot of the same GUI features, just with limited functionality. Perhaps there is a reason they chose to remove these features from the newer applications.

This is really a deal breaker for me because I almost never process a single image at a time, and cannot process hundreds of images one at a time. It makes the new apps useless to me.

Topaz has an amazing opportunity to extend their business model to include to those who work in Visual Effects and post production. However, they seem entirely focused on the amateur stills photography market. If they supported Linux, or command line options, they could really become a staple tool for visual effects. There is nothing like it for us as far as I know. Most studios would be willing to pay a premium for such features. Hundreds of dollars per license is not out of the question.

I think that the request for Batch Procesing for Denoise AI is extremely important and urgent. It could save many many hours, possibly weeks of individual processing sessions.
Nor is there any downside to users. Anyone who does not want to batch process simply will not. It’s just a matter of common sense.

“I think that the request for Batch Procesing for Denoise AI is extremely important and urgent. It could save many many hours, possibly weeks of individual processing sessions.”

Exacty same things, and for all AI products.
The good idea is the same method of Xmedia Recode from video.

I often get asked to shoot dress rehearsals for amateur theatre groups. This usually means lots of images shot at ISO 3200. I want to come home, transfer my images to the computer, kick of a batch Denoise AI on the lot and then go to bed. The next day I can start culling and editing.

The batch process is vital in some cases we’re talking nearly 2000 images. Yes most of them will be culled, but even after that I will still have a couple of hundred, and I simply don’t want to have to individually denoise them.

Heck, just give me the ability to invoke the app with command line source and destination arguments and I’ll script my own batch process.

Any batch process would rely on using the same setting for every picture in the batch though maybe an auto mode could look at each one. If you require individual settings for each picture (different ISO or lighting) then batching won’t work (except for an auto mode). Just in case someone doesn’t understand “Recover Detail” it is blending the original shot back into the denoised version. Denoising is not the same as Enlarging, which can be a set process.

I am fairly certain the concept of batching is well understood by the users. Loading an image, adjusting parameters, and then run those same settings on each image. So if you had an image sequence of video, the same operations would be applied to each image to maintain temporal consistency.

Your response makes it sound like there might be some resistance from the developers to implement this feature because of some coding difficulties in doing so. Would it be possible to elaborate. I don’t see how blending with the current input image would cause any issues.

Blending with the input image doesn’t cause any problems I’m just explaining what it means. I’m not with Topaz but I haven’t seen them make anything designed for video so the primary purpose of these apps is for still photos. A series of stills might cover a variety of subjects and ISO settings so using the same setting for a bunch of them could produce less desirable results.

I suspect that most of us who do much with batch processing are aware that there are settings which persist and we have to account for that in how we use it. This issue comes up all the time when creating any kind of batch processing.

If there were just a way to save setting (generally is in all Topaz products) AND a way to make a saved set of settings the default choice when the plug in is activated, that would make a huge difference for all of us who use actions.

It would also be a big help to any user who uses the same of similar settings frequently.

Hey all, please check out cloudai.topazlabs.com to see our new cloud service for Gigapixel AI.

Are there any developers here?
This cloud service comes with an API that can be used to automate your Gigapixel upsampling tasks.

There is a contact form at the bottom of the page where you can request your API key.

If you are not a developer, don’t worry, you can still upload images through the website and have your processed results sent back to you.

Please let me know if you have any questions guys. Thanks

Well … cloudai is nice for those who need it, but I’m sure that there are many users who would find it faster and easier to use their own fast hardware if they have it.

This doesn’t change the need for batch processing in Topaz AI products such as Denoise AI and Sharpen AI stand alone software.

I see what you mean.

I think adding an API feature like this is a great move, since it gives developers a way to develop cool tools.

My interest is only for my own use on my own computer. I don’t use most Topaz generated adjustments directly on my images. I like to run an action and have it applied to a layer. This gives me the option to adjust the opacity or add a mask as appropriate (or perhaps rerun topaz manually and adjust differently for that specific image) for the image, but doing the action as a batch process makes it more efficient.

I can run a batch on all the images, say 100. I can then inspect the results and adjust if needed.

The biggest issue is Topaz Adjust AI, which does nothing if run from an action. At least Topaz Adjust and Topaz Studio will, after being run once in the session, default to the last chosen settings.

I would like to see all of them have the option to create a default preset which happens by default, but at least the “last used settings” option would be very helpful in Adjust AI.

I saw the other Threads. I see alot of people wanting this.

In other news: when you use a 3d rendering program like key shot, v ray or what ever it renders out the animation in stills as a option and you get 100’s of frames. applying it to all would be nice. I bought the package deal so i have the right to ask you why won’t you add it?

One more request for batch processing in Denoise AI and Sharpen AI.
Are these on the list to be added at a later date?
Cheers, Rex

Yes, it would be great if Topaz gave us some feedback on this.