BW Effects has supposedly been replaced by Studio 2 (https://help.topazlabs.com/hc/en-us/articles/115001521092-Legacy-Products), but although you can convert an image to Black & White in Studio 2, what you can do with this newer program in this respect is not as much as you could do in comparison with BW Effects. One can say that other plugins might have been replaced by Studio 2 or by their newer AI versions, but not BW Effects.

There might be other programs that have a similar function, I don’t know of much, but I remember that when I decided to buy BW Effects I had to choose between it and Silver Effex Pro as it was said that this two were the best around for the task, and I chose BW Effects.

Maybe Topaz is thinking to release a B&W AI, which I am not sure it would make much sense. Or maybe an updated release including masks with or without U Point technology (though some of Topaz programs have very good masking capabilities), but I haven’t read anything about this being in the plans of Topaz Labs. Are there any such plans?

Might it be that Topaz Labs sold their plugin or its technology to another company and agreed not to use it in their own programs from now on?

What you can do with Studio 2 in terms of converting to black & white is nothing of the like of what you could do with BW Effects (and can still do if you already own the plugin), so: why not keep selling BW Effects as a Legacy product, cheaper than the new plugins or why not give it as a bonus if somebody buys no less than x Topaz Labs products (or whatever)? Production costs for BW Effects have been obviously amortized so it could be sold cheap. It had not bugs that I know of, it does a great job and is very powerful for what it does, it can be opened in any computer (no matter how old) and in any program that admits plugins (being them for 32 or 64 bits indistinctly). If I didn’t have it and it were being sold cheap, I would certainly go for it. Luckily, I bought it when it was still around.

BW Effects has supposedly been replaced by Studio 2 (https://help.topazlabs.com/hc/en-us/articles/115001521092-Legacy-Products ), but although you can convert an image to Black & White in Studio 2, what you can do with this newer program in this respect is not as much as you could do in comparison with BW Effects.

I think this says it all. Besides BW Effects having adaptive exposure there are different categories full of presets. If I want a BW effect I go there instead of Studio 2.

I would agree with you on the presets being left out of Studio 2’s Looks, but I believe they would argue that they’ve provided the same creative controls as in the original B&W Plug-In through arcane combinations of the various Studio 2 Filters.

Andymagee-52287, You are probably right, but that being said and the case, the same could be done with almost any serious photo editing program that also has the needed tools to convert to B&W and to apply whichever appropriate filter included in their set of tools.

I haven’t done many B&W photos, but sometimes there is an image that deserves to be or benefits from being B&W. I have DxO PhotoLab Elite which I use to develop my raw files and DxO Film Pack which can convert to B&W, and I have other programs to edit my resulting tiff files that can also convert to B&W. But although I have tried with those, finally, every time, I ended up doing the job with BW Effects (for a reason, because it is a specialized tool for the task and a very efficient and complete one in my opinion).

Again, I have always been able to convert to B&W with any of the photo editing programs that I have and had. But I nevertheless bought BW Effects for what it was (is). And this might also be the case of almost everybody that at some time decided to buy BW Effects.

but I believe they would argue that they’ve provided the same creative controls as in the original B&W Plug-In through arcane combinations of the various Studio 2 Filters.

I suppose I could create an opalotype effect in Studio 2 but I only know what to aim for because I have BW Effects. I’d never heard of opalotype before I had this plugin.

Mostly an Opalotype effect can be achieved with adjusting the Opacity, some of the older presets in B&W Effects also include Silver/Paper tone adjustments which are harder to achieve using ordinary Dual/Quad tone… 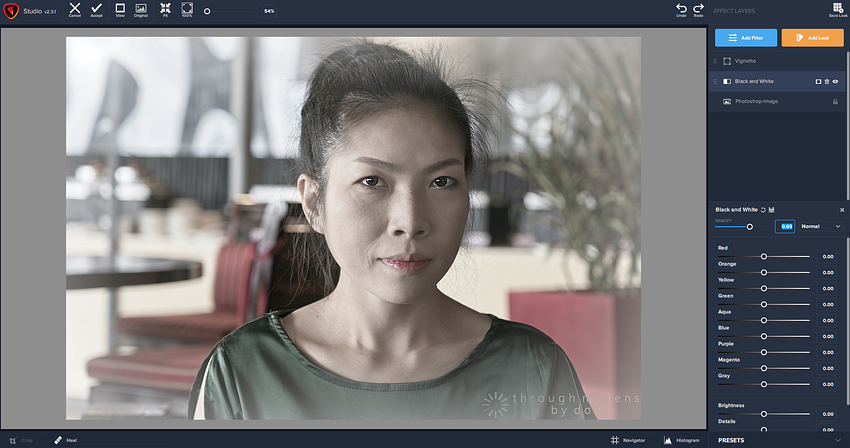 I just came up with a nice effect in BW Effects by playing around with the Silver/Paper tones. It was so quick and easy compared to trying to experiment with quad tones. I suppose it’s because BW Effects specialises in doing black and white while Studio 2 is more general.

Just going off at a tangent here. I qualified for a free copy of Adjust AI but I never use it because I find the original Adjust is far more versatile and it has dozens of great effects. I wouldn’t have the faintest idea how to recreate a lot of them in Studio 2. (I’ve yet to find a use for some of them but one day I’ll come across the perfect photo for Glow In The Dark).

Topaz had some great Legacy plugins that can’t be replicated with Studio 2 or the AI programs. I wish some of the ones I missed were still available for sale, I’d buy them even though they don’t offer support for them.

Agreed. BW effects is well conceived in particular local contrast. I began working with digital imaging in 1981. BW effects does what can’t be done optically - many programs attempt to emulate analog technlogy, - this program did both. It will work - on images smaller than 6K pixels wide. Otherwise fails. I would URGE Topaz to ‘fix’ the code and make it available.