At the very end of Hedley Spit on Pt. Monroe, there is a large grassy field. The field is strewn with driftwood and knee to waist high grass. If you look closely, you will see a half dozen or so Canadian Geese poking their heads above the grass keeping a wary eye on beach walkers such as ourselves. We’ve been walking to the end of spit almost every evening, rain or shine. As it turns out, there is also a flight pattern over the end of the point. A couple nights ago, I was fortunate enough to capture a pair of geese making their final approach as the sun was setting. 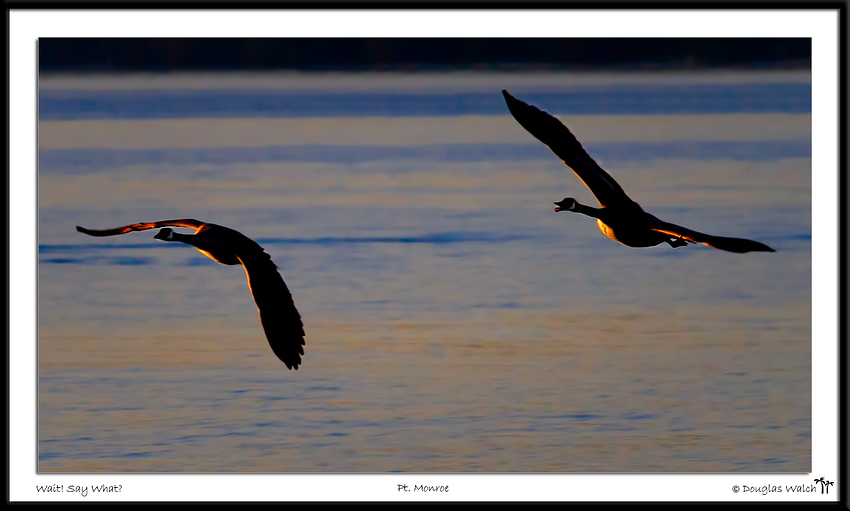 We get a lot of them here in New Mexico as well. Nice shot.

Great shot. Geese are so talkative. We’ve a returning pair that nest on a pond nearby and overfly the house at dawn to go and feed.

Yes, very talkative. There is a significant number of them here in and around the spit. The talk back and forth from one end to the other. I love to hear them at night as I drift off to sleep.

Is there still the little store at the bottom of the hill before you head out to the beach houses? It was always a treat to visit it with a pocket of change for candy and a soda.

No, no store. Just expensive houses. There is a great garden supply, nursery, coffee shop at the intersection of Sunrise and Valley about 5 miles away called Bay Hay. I suspect it was there when you were here. It seems quite old.

When I was there Bay Hay was a Mom and Pop grocery store. The garage across the street was there. Growing up on Bainbridge there were no street names and directions were given by landmarks and peoples houses. What is now called Frog Rock was simply The Big Rock. It was painted by High School Seniors when I was away at university.