I read all the old posts - but still unsure. To speed up Topaz ( every app including Studio not just the new AI apps) what would be the best ultimate system to buy - that is where are the bottlenecks. Imagine your employer said - money is not object but your fired unless you can increase your topaz rendering times. So what really speed things up

For instance, I have a very high end gaming PC - windows i7 9700K/16gb ram/fast ssd/1080ti with 11gb vram - and do professional work where I am willing to buy what I must to speed things up ( for me mostly topaz studio and all its apps) -

and the CPU threads matter where I should get an AMD many threaded CPU
or pure single CPU thread speed ( overclocking them?)
or is it also system ram ( I for instance only have 16Gb)

Or tell me what I can do to profile where the issue is.

You tell me I will buy a ~ $4k computer if I have too and report back on how it went.

So where is the bottlenecks and spec out the best Topaz computer possible.

I got my once-in-a-lifetime Windows PC
in January 2019. Here is the spec and it
is licketty-split on all things Topaz! 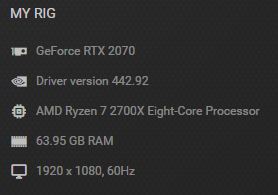 Thanks - nice system - but I was thinking even more than yours or mine which are quite similar, almost the same except you have a lot of standard Ram (64 to my 16) but I have way more GPU speed and VRAM (1080ti 11GB compared to your 2070 8GB) — and this gets back to my question what will truely will speed things up, cpu/ram or gpu. Any thoughts from anyone. Where is the bottlenecks - if you had to build the ultimate system (more that our $3K or less current systems) for speed ups, what would really work.