After a very long time, I was able to save the file. Not sure why there was no progress bar to indicate that the program was in the process of saving. It took about 4 minutes.

My old cpu only has AVX support and so this latest ver1.0.1 won’t install.

My computer ran all previous versions fine without any hiccups.

Any work arounds to install the latest ver1.0.1 on computers without AVX2 support?

It’s a fairly straightforward (vs tricky) image, but PAI A.P. detected all 8 faces and detected the ‘herd’ of little soccer players as the subject.

Given the latest development I went in and de-selected 5 of the 8 faces (hope I did it right - I ended up with the 3 I wanted to be the ‘stars’ with yellow squares around their heads, the others that had been selected ended up with black squares). It worked just fine. And, it seemed as if I could undo my choice if I changed my mind (which is always a good thing when dealing with artsy stuff).

This is an instance, though, where my buddy who I had the tete-a-tete with about ‘PAI deSharp’ (his idea - mine was just a slider re-alignment…) in the former release might see where I was going. If I had my Sharpen slider that started at zero in the middle and could slide gently to the left (ie, the minus direction), I’d choose the 5 faces I didn’t choose above and I’d blur them ever so slightly in the PAI product to make them recede from attn a bit relative to the 3 I’d like to stand out … but that’s future dreaming. The current function works with this image! 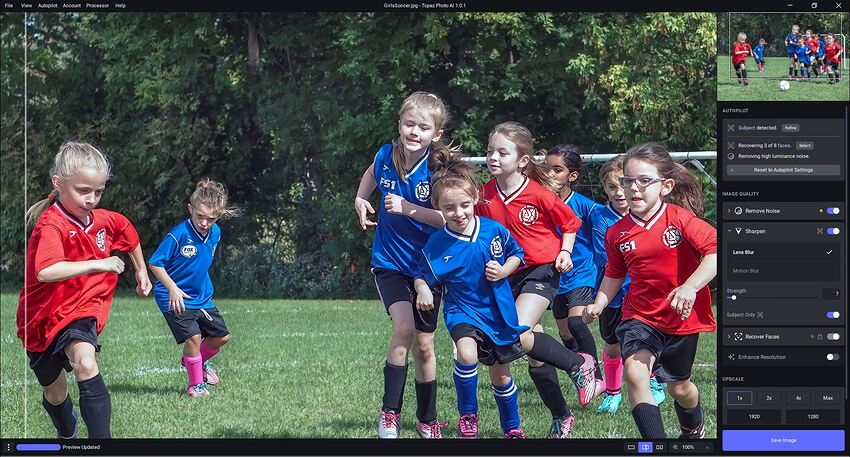 Great product. With all the enhancing, sharpening, and denoising, I think a good photo grain tool would be a welcome addition to help bring back some detail and charm into photos that might look a bit too plastic after all the processing.

(Similar concept could work for sharpening/softening on a single slider too!).

Same here. I have pretty powerful hardware in the computer with an older processor (i7-3770, 32 GB RAM, RTX 3060 with 12 GB). I can no longer install version 1.0.1. I can run all AI programs with this PC with no problem, but if it is bundled with AVX2, that is a problem. The reason I have a powerful video card in my computer is to make it work, not the processor.

a lot of bugs have been fixed since my last reply to V 0.8.

I´m sorry, but for these issues are still not fixed (StandAlone Modus):

1. Still no Thumbnails for Canon cr2 and cr3 files
There are still no thumbnails shown using cr2 or cr3 files. E.g. using old NEF file or a very old DNG from my old iPhone6PLUS it shows up thumbnails.

NEW ISSUE
I just noticed that according to Task Manager, when Sharpen is running, the CPU load is quite high and the GPU load is only about 15% max.

For all other operations like Denoise, the CPU load is below 20%, while the GPU load is sometimes > 80%.

I explicitly selected the GPU in the “Processor” preset.
Therefore, it looks to me like Sharpen is not using the GPU!

Just want to aye-aye some of the feedback here. I was hoping this would replace Gigapixel and other separate programs in my workflow. But the Autopilot step takes so long to process I’m going back to the old suite after a few days use. Until I can functionally use the upscaling / denoising / sharpening tools independently in batch, without waiting an inordinate amount of time for redundant scanning (I have to manually switch off all the auto-adustments for my use case with this batch of abstract images anyway) then it’s a lot of wasted potential that’s yet to be realised. Early days I know, but will need to check back again in a few months.

Another vote for defaulting all processing to off when loading a picture, then the user can select whether to use the autopilot or manually enable the various modules.

Easy tweak to the code.

Like with other software, when enabling a module it could still suggest what it thinks the right values are for sharpening, denoise etc.

But leave it to the user to turn autopilot on/off.

Nikon D810… 36M is the spec, but the files range from 33M to 44M uncompressed NEF… There are several smaller Compressed options, but I never shoot compressed…

That’s just to represent its locked and can’t currently be toggled.

Hi, Thanks for the Update.

An issue I noticed on the new version is that the “Allow auto-upscaling” will not remain selected and has to be selected prior to choosing images to process.

As others have mentioned, allow the toggle of auto subject selection.

When processing is complete and images are saved - allow the option of closing all images automatically.

I enjoy using Mac Photos app to manage my images, the integration with this is not quite on par with Gigapixel and Sharpen - would love to be able to right click on a image, use Photo AI, and have it over-write the image in Photos?

Thanks for your consideration - product is promising!

Maybe a different color might be a better indication.

The sharpening quality issues I’ve mentioned for PAI 1.0 are still in place. It seems nothing has been changed.

May I ask you to clarify if all SharpenAI models will eventually appear in PhotoAI? Are you going to add an option to disable Autopilot feature?

Long-term, TPAI should have the majority if not all the functionality of the previous IQ apps, but we’re not just pulling them all in at once so we can give each feature the attention it deserves, and give ourselves the opportunity to re-think the design decisions present in the older apps.

That’s why the list of things we’re actively working on says the reported problems rather than the suggested solutions. While we’re of course considering the specific suggestions users give us, we’re making sure to consider alternatives.

With respect to disabling AP, I think our solution to the “AP takes too long” issue we listed in the changelog will go a long way without outright disabling AP.

I completely agree with you about being able to brighten the shadows in RAW development. It is a major weakness for anyone with high dynamic range images. Really just needs a curves or levels adjustment and a histogram.

Hi, OK firstly no disrespect to Topaz but am I the only one that feels they have pushed the button for the release of TP a little to soon?
Have been following along with the not all but a lot of posts here and so many people before the release stated what they felt was missing or what was not quite working correctly and now still on here although it seems Topaz don’t visit to often or at all because so many replies of “take it up with support” there are still numerous faults (for want of a better word) being stated. Yes I no it is a new product but it does seem to have been a bit of a rush since we where first offered the chance to try it out.
I no we live now in a society that wants to run before they can walk but that just not happen anywhere never mind in software development but PLEASE Topaz give an option to refine a selection!!! 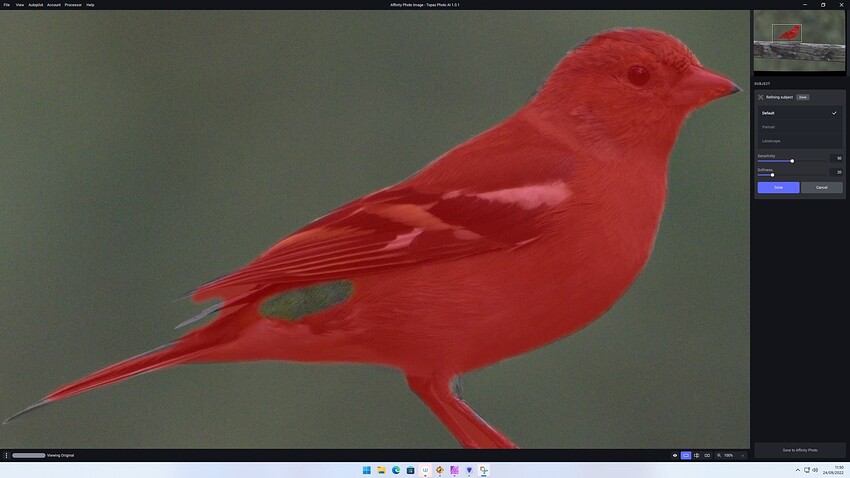 I wholeheartedly agree with you Russell - the idea for this software was good in principal, but in practice it is not anywhere near as useable as it should be, I hope going forward that Topaz listen to it’s users and make changes/improvements going forward.
Mark