There seems to be a limit on the image size. I am getting the error “Could not run model” on almost every round-trip to Adobe Lightroom. When I process a smaller size image as a stand-alone, the image processes fine. 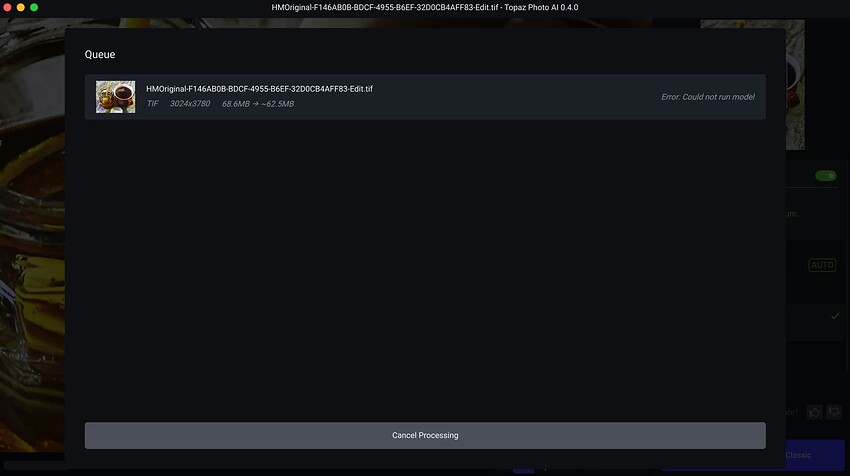 Running on an iMac.

Hi - can you please send me an example image through Dropbox? Thank you.

Yes, we are. We’re working on DNG export and are planning on adding it in a future early-access version.

Tried 4 as a standalone today and noticed that the normal Win 11 facility, to mouse over the full screen icon ( top right ) offering subdivision of window space for active programs , is not there. Pity as this is a great way to have two active windows for drag and drop.

Opened an old Canon CRW and allowed it to try on auto … looked like it was doing things but preview did not change to show it … then set it for manual and ti showed, but the auto settings seemed too aggressive on sharpen. I was up-scaling 3x and found the results to show fringing etc. so I reverted to AI Gigapixel. Now I found a nicer result and saved it as a DNG. I opened Bridge and Gigapixel did follow the windows conventions on window partitioning… however there was an issue when I opened the DNG and closed it, then tried to open it again . Photoshop CS6 now moaned about the version of the RAW converter. I deleted the DNG and re ran the process from the beginning. First open into PS6 from bridge was fine, second it moaned. Seems we have a one time use DNG !

Have been copying 35mm Kodachrome slides with a 5DSR and a macro lens. Fed the resultant RAW file into Photo A! as plugin and did not lie the noise removal as Auto , too much noise and if anything no better, so again I reverted to AI Denoise and liked the rendition on severe noise. The sky areas looked great.

Tried 4 as a standalone today and noticed that the normal Win 11 facility, to mouse over the full screen icon ( top right ) offering subdivision of window space for active programs , is not there. Pity as this is a great way to have two active windows for drag and drop.

I confirm this issue

Hi Yazi - I might have been impatient, because I tried with another image and went away from the screen. When I came back, it had removed the noise. So it was a case of not having any indication of the processing update. I think this might be the problem and send you a copy if it does not work to satisfaction, ok? -Steve