I tried Gigapixel on a number of images, comparing the results with similar outputs from Photoshop, On1 Resize, and Alien Skin Blow Up.

Overall, Gigapixel compares favourably, except the resulting image is darker (by about 1 stop), more saturated, and has more contrast than the original and other results (all of which are about the same). This happens regardless of whether the Enhancement check box was selected or not.

All inputs were PSD or TIFF ProPhotoRGB files, and all outputs were all TIFF ProPhotoRGB Files. As noted, I ran it with the Enhance box both selected and unselected with the same results. I also ran it for 200%, 300%, 400%, 500%, and 600% upsizing percentages - all exhibited the same behaviour.

The resizing software must not make any other modifications to the file on output … no “adjustments” please. If Gigapixel is used to resize images, additional work will have to be done to return the resulting image to its starting point in terms of exposure, saturation, and contrast - which is a fairly tough task to do without knowing how Gigapixel modified the image in the first place. Note that none of the other resizing products make any such modifications.

Please remove such processing - or at the least, identify exactly what is being done to produce the output in terms of exposure, saturation, and contrast to it can be undone … or make expose these modifications on the user interface so they can be adjusted by the user. The output exposure, saturation, and contrast need to match the input precisely unless modified by the user.

(I note that some users have experienced “desaturation” in their images … Gigapixel definitely appears to be making some unwanted adjustments at random, or possibly depending on the exposure, saturation, and/or contrast in the original. Please fix.)

Overall, Gigapixel compares favourably, except the resulting image is darker (by about 1 stop), more saturated, and has more contrast than the original and other results (all of which are about the same). This happens regardless of whether the Enhancement check box was selected or not.

Note that there is a known issue with RAW files which is being worked on.

Note that if they are any ICC Profile other than sRGB they must be viewed in a color managed environment such as PS, AP etc.

Also please state what OS & GPU is being used on your PC and what driver version is the GPU using.

Environment is colour managed, but it is not clear to me what you mean by: “color managed environment such as PS, AP, etc.”

Both the before and the after images were exzmined in the same environment: Photoshop CC Release 19.1.5 and Lightroom Classic CC Release 7.4 Camera Raw 10.4.

I last calibrated my system approximately 3 weeks ago.

I will get a couple of samples to you in a short while.

Most display apps such as Photo etc. are not color managed.

Here are the requested screen shots…

First are 2 screen shots provide examples of the modifications that Gigapixel is making to the resized image in each case. There are 3 separate images in each screen shot … 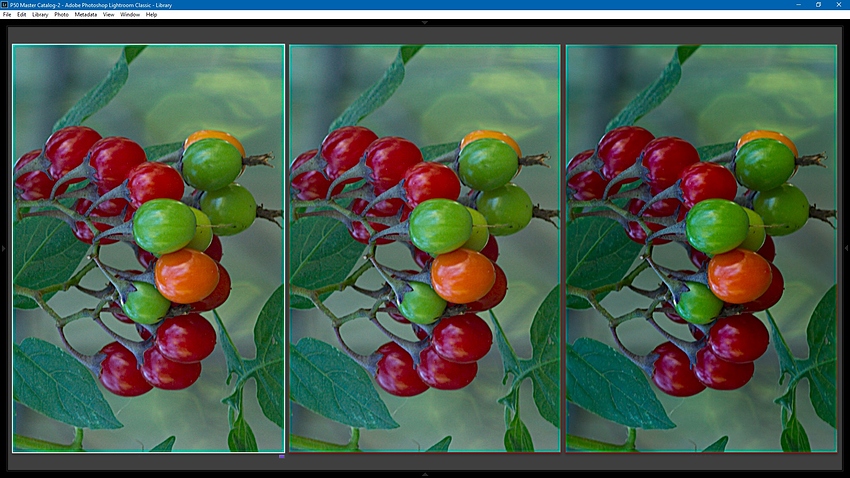 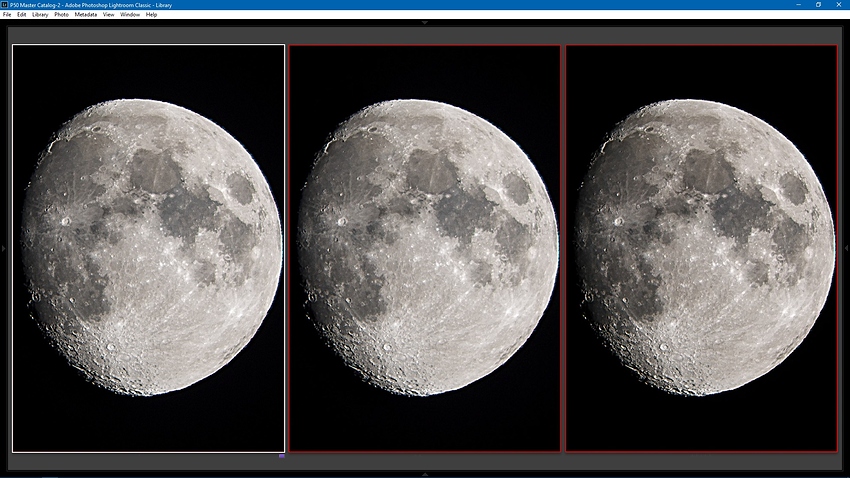 Note that in both cases, the images are colour (not B&W) and no further processing (sharpening or adjustments) were made to the output images. The red borders were added during the crop of the original to ensure a correctly sized crop.

The next two screen shots included are typical of the Input and Output screens of Gigapixel. I don’t have time to repeat the runs, but I used the same inputs every time, and got pretty much the same results screens.

Note: while this image shows the Enhance checkbox selected, the Gigapixel-enlarged images above were made without that checked. However, the both the visible results and the histograms were exactly the same whether or not Enhance was checked. 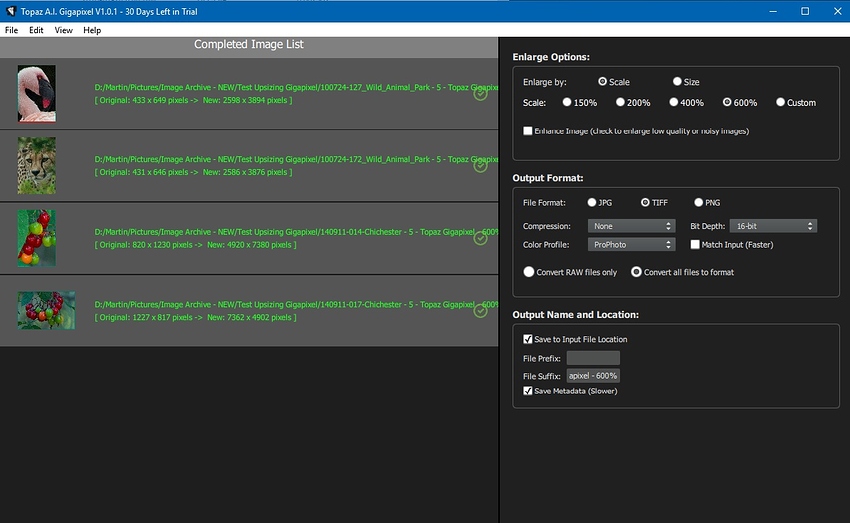 I think these samples are fairly self-evident, but let me know if there is anything further you need.

Re version of driver …

The drivers installed are the current recommendations by both Lenovo and Microsoft. I only update drivers when recommended by either or both of them. Over the years, I have had far too many issues updating device drivers (particularly NVIDIA drivers) out of sync with what my SW/HW-system-providers recommend. I’d rather let them test and advise than be their (or anyone’s) Beta tester.

So, my question back is this: Will that minor an update in the graphics driver cause the issues I am experiencing? I rather doubt it would, but you’re the expert here.

Will that minor an update in the graphics driver cause the issues I am experiencing? I rather doubt it would, but you’re the expert here.

Honestly I don’t know as I am running the latest version and I don’t see what is happening to you.

I see that you are selecting ‘Convert all files to format’ and in this case, as the input & output are the same format, it will extend the processing time.

I haven’t run tests using convert all to format (I only convert RAW and not until it is fixed) so I suggest you raise a technical support request and send the original you are upsizing to see if tech support can reproduce the issues.

Note that the support for GigaPixel is under the Technical Support for plugins etc., can be accessed from the link above or directly from the website.

Ahhh … I thought that this was the forum for Topaz tech issues. I will report it there, as use that for future tech issues. Thanks.

Well, since I can’t find where to report Gigapixel bugs, I’ll continue here …

Tried another test, with an interesting result … after I updated to this evening’s latest Gigapixel.

I ran a 600% up-res of an unprocessed full-sized raw VERY noisy raw image, shot 10 years ago on a Nikon D70 camera.

The result is a washed-out pastel TIFF, which appears to be approximately 2 stops brighter, to the point where some highlights are actually blown out. When I ran with EN checked, I did in fact get some amount of noise reduction … but at 1:1 it appears to now be speckled with light spots. I will include some screen shots below.

Screen Shot 1: Raw file (left) + G-Pix result, with Enhance checked, @ size-to-fit resolution. The difference in brightness is very apparent. That was unexpected … what is G{Pix doing to my images?

Screen Shot 2: GPix no EN(left) + GPix with EN (right) @ 100% resolution. The noise is gone, but there is speckling throughout. Not sure which is better, noise or speckles.

I really hope Topaz developers read and pay attention to this forum, because I do not have the time or inclination to re-enter all this stuff elsewhere. As for hardware requirements, I meet and surpass the minimums. The product produces unpredictable results.

It has been noted, and the developers are working on improving the raw conversions.

In your previous posts you were saying you had issues with Tiff and psd images. If that is still the case you need to raise a technical support request as I haven’t seen other reports about anything other than raw.

Excellent question. I should have thought to rerun my original test suite.

I managed to carve out some time, and here are the results …

…- Converting TIF to TIFF … much better, almost identical to the original in terms of brightness, contrast, and saturation. I ran it with EN turned both off & on. Thank you for addressing that.

… - Converting PSD to TIFF … still appears darker, and the contrast and saturation are way down … almost B&W in one case. Here is a sample …

Actually, looking at the hilites on the berries, it is probably closer than it appears … the desaturation might be what is killing the contrast/brightness. But I’ll leave it to the programmers to figure it out.