I’ve been trying to edit images and they won’t save. I’ve tried through Photoshop as well as the stand alone version of Studio. In Photoshop - I create a duplicate image layer then run Studio through the plugin panel. After clicking the save (return to host app) button and returning to Photoshop the changes I made don’t show up.
When I tried Studio on its own I “Save As” the image - open it in Photoshop and it is dull and dark. This happens what ever image format I use - jpg or tiff.
I am using a Mac with OS 10.11.6. I use Studio on a Windows laptop and this doesn’t happen. 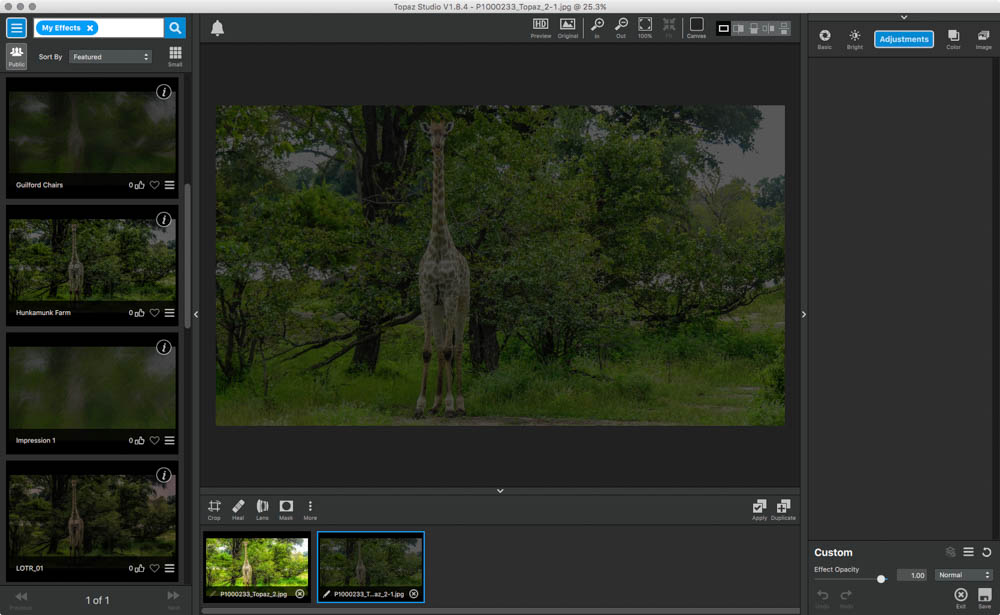 Hi. Just for your info, I am not experiencing this problem on a windows 10 desktop.

Neither am I on my laptop - it works great. It’s the Mac that is giving me fits.

I had the same issue yesterday, but when reopened in LR it was OK. I just couldn’t continue post in Studio, the screen just went black.

Exact same problem. Downloaded all the plugins I needed for the effect I’m looking for. Still whole image destroyed. uninstalled both versions. Working on 10.12 sierra Mac, and can’t for the life of me figure this out. Lost my whole afternoon, and a bit frustrated because I want to love this but just can’t get it sorted out. These are how the images are getting saved, plus with the edit. 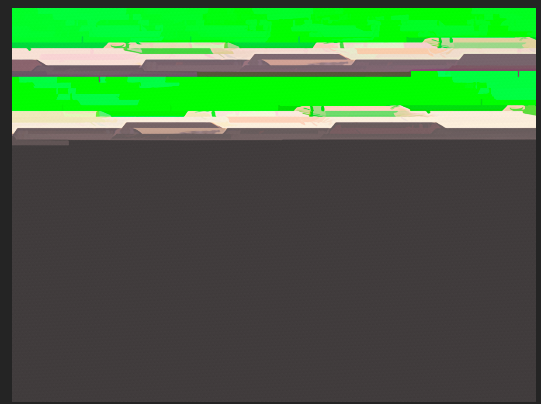 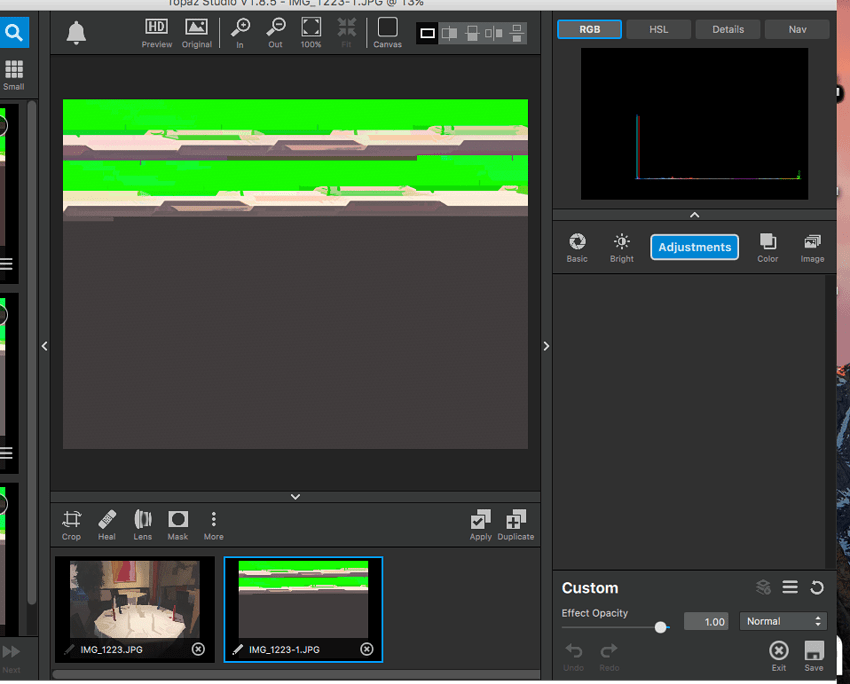 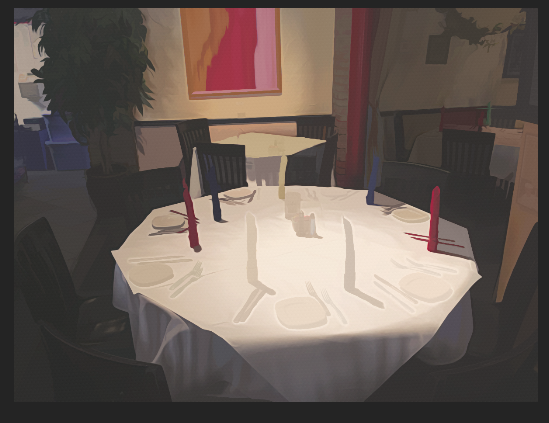 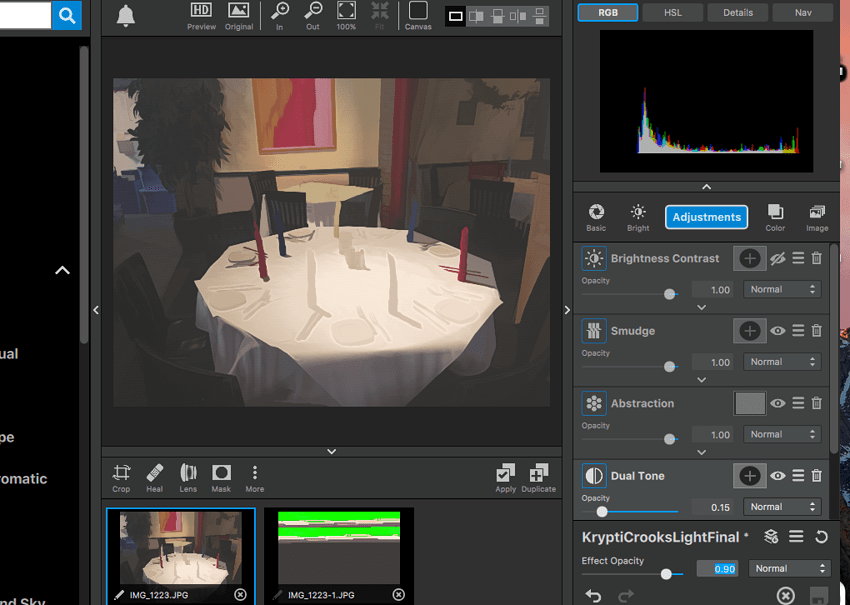 I strongly suspect your Mac is using Intel HD Graphics 3000, which is not supported. Can you confirm which GPU you’re using?

Ouch… That seems to be the case.

Off the top of your head, do you suggest a relatively cheap fix? I’ll do
some research, but you seem to have a good idea what’s going on.

Unfortunately, we tried and tried and tried with the Intel HD Graphics 3000 GPU, and it’s just a no-go. It’s a unique case, because Windows users with the HD 3000 GPU cannot even install Studio, due to Windows variants only supporting up to OpenGL 3.1. Topaz Studio requires OpenGL 3.2 support. When Apple included the 2nd Gen Intel CPUs with several of their Mac Mini and MacBook Pro models, they quickly learned that the improvements to OpenGL from 3.1 to 3.2 was significant enough that many things would stop working if they didn’t fix it. So, they hacked up a 70%-supported OpenGL 3.3 driver for the Intel HD Graphics 3000 GPU. This meant that apps requiring OpenGL 3.3 would work on those Apple machines, but if any apps required the use of the other 30% of the OpenGL functions, it would fail. Studio needs a few things in that 30% area, which causes the HD Graphics 3000 GPU to fail upon save. It’s unfortunate, but we’ve done all we can for that graphics card. We have a few machines here in the office that will never run Topaz Studio thanks to the requirements we had to set to make things work the way we wanted.

As for cheap… well… you can’t really upgrade a Mac computer unless you’re fortunate enough to have a tower that supports hardware replacement/upgrades.

Man… What a bummer. After buying the effects I wanted, I sincerely saw a glimpse of Topaz making my animated series workload cut nearly in half and cut in half another time. I want to be your biggest fan because I saw the potential, but buying another computer simply for the graphics card is out of my budget. Putting every free minute into animation, and working a part time job to find animation time just ain’t going to allow that Topaz jump!

Sorry about that! I see you had a ticket in with support as well, which I’ve just responded to. If you want to continue the conversation, we can do so there, but I think we’ve reached the end of the troubleshooting process here.