I have been looking for a good description of the difference between the Focus and the Sharpen functionality in Sharpen. The short bit on the Topaz website under the Sharpen description really does not do much to clarify this for me, and neither does the Sharpen flash screen that shows when Sharpen starts.

Is there someplace where I can find out exactly what the difference between these two functions is? And when I ask that I do not mean the internals, but rather when one is better to use than the other.

My take on it is that 'Sharpen takes the sharpest part of the image as the basis for setting the ÁI model parameters to be used for the entire image. That results in only the most focused regions becoming sharper.

‘Focus’ on the other hand, assumes that there is lack of sharpness, even in the most focused (but actually still defocused) parts of the image. Hence. it will attempt to focus similarly defocused regions throughout the image. As a result it might also pick up regions that should have remained defocused, but had enough remaining contrast to cast a doubt on it’s amount of defocus. Complicating factor is that some lens designs produce so-called spurious resolution in out-of-focus (OOF) regions (i.e. bad bokeh). Obviously OOF regions then create sharper looking or double contours around repetitive patterns. These will unfortunately be sharpened even more.

Thanks for the insight. That seems to make sense.

Part of the problem for me is that I generally have not seen any difference between the Sharpen and Focus settings, but I have not used your criteria for checking. I will.

‘Sharpen’ typically does best when the image is already reasonably well focused to begin with. ‘Focus’ typically improves situations where even the best focused parts of the image are a bit defocused. But ‘Focus’ may pick up areas that should have remained defocused.

Hence the requests (if not a need) for an ability to guide the process, e.g. by painting in and painting out a kind of mask that includes/excludes certain regions from refocusing.

Just masking out unwanted sharpening would already help, but there would also be a use case for being able to specifically select regions on which to focus. But that’s more something for the Beta tests where new features can be proposed and tested.

I suppose the only current way to do that is to Focus a duplicate of the image and then take care of the masking in Photoshop or Affinity Photo or some other pixel editor.

I have had mixed results with Sharpen AI, with some amazing improvements and some images that show no visible change at all. Perhaps I have been using the wrong type of sharpening so I am grateful for your help here.

Correct, currently the best approach is to use a photo editor like Affinity Photo or Photoshop, or even Studio

, and use layers with masks.

But it would be very helpful if that need is replaced by something that can be done right from within Sharpen AI. Especially if that would add the capability to directing Sharpen AI’s attention to specific areas, that would not be picked up. An example would be when the camera focused on something in the foreground, but it should have focused in the background. Currently there is no way we can tell Sharpen AI what to pay attention to, and what to ignore or give lower priority.

As to the mixed results, it may depend on the image quality you start out with. I have lots of images that are already very well focused, and I use Capture One Pro for Raw-conversions which already produces high quality output, even without adding sharpening with it. In those cases Sharpen AI can (and should) only improve the result marginally. But other images need a lot more help, usually because the camera lens is struggling a bit more, or when subject motion is involved.

I’m working on some examples, I hope to find the time to post them later.

Looking forward to any examples you can provide. Sharpen AI, like any app, works best when the user has some idea what he or she is doing, and your examples will surely help me, at least.

Here are 2 comparisons, based on the same image-crop. The image was taken on a sturdy tripod, but an aperture of f/16 was used. That narrow aperture caused diffraction blur (with resolution loss) and, additionally, a tiny bit of subject motion blur (despite my trying to shoot when the wind induced subject motion was at its minimum) was caused by the required exposure time of 1/8th of a second. 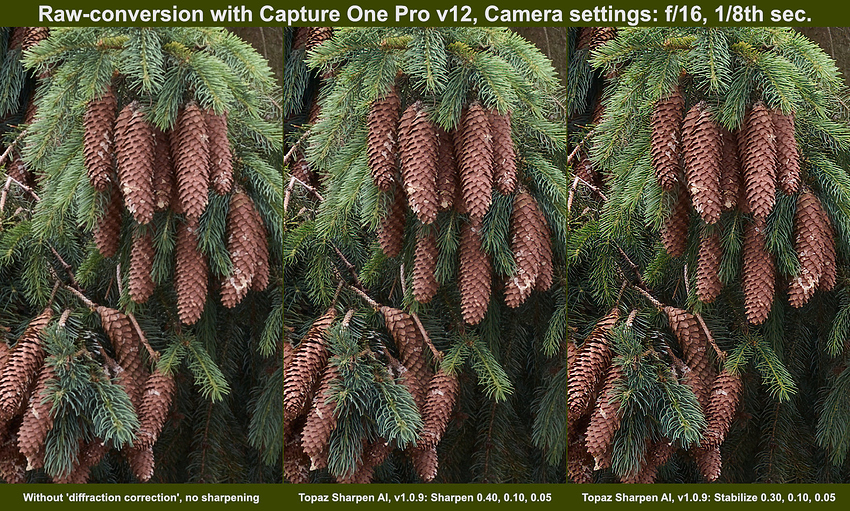 Click on the image to view it at 100% zoom, and make sure that your browser doesn’t zoom in itself. Maybe it’s better to download the image and view it in an image viewer or editor at 100% zoom setting.

Due to the softness and resolution loss caused by narrow aperture diffraction, Sharpen mode already produced a significant improvement, but removing the tiny amount of subject motion blur with Stabilize mode helped it a bit more.

The Raw converter I use also offers a feature called “Diffraction Correction”, which usually does a very good job of applying automatic Deconvolution sharpening (like the Topaz InFocus plugin does), to compensate for the diffraction blur. I also used that as a Raw conversion, again without adding any additional sharpening. 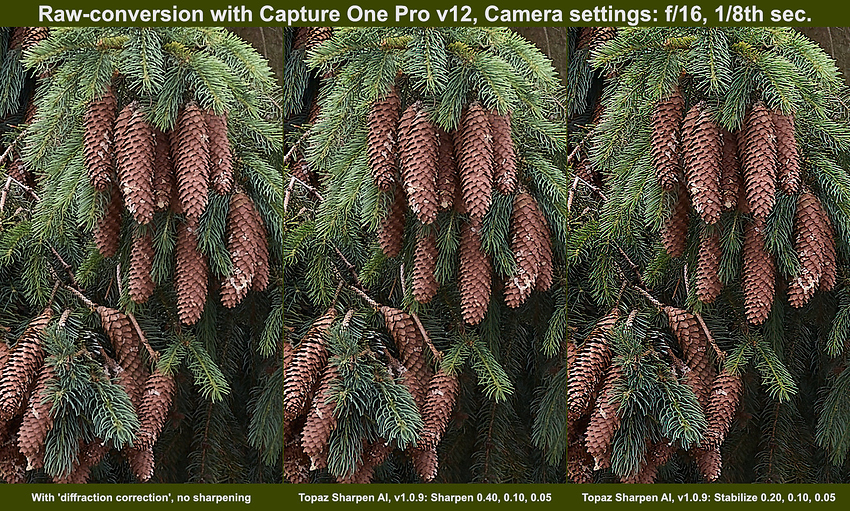 This time, the Raw converter already took care of most of the Diffraction induced blur. Therefore the subsequent Sharpen mode adjustment only produced a tiny bit of additional sharpening, as it should. By using the Stabilize mode, again a slight improvement was achieved.

This demonstrates that if an image needs more help in regaining the original sharpness, Topaz Sharpen AI will make more of a difference. If that same image is already reasonably sharp, then the gains will be relatively small.

As with your examples I have found Sharpen AI result to vary considerably. Often, when the original photo was sharp, there is almost no noticeable change and I ask myself if it is worth the cost if the result is not even noticeable to me when I am looking for it.

But then, every once in a while, I come across an image that is slightly OOF. Last week we were at a local campground and I had been taking some photos of an American Coot. The birds are all black except for the beak, and that sometimes makes them difficult to get good focus. No contrasting colors unless you get the focus point exactly right. I took some photos of one gliding along on the lake and it came out slightly OOF. Here is a crop of the original photo: 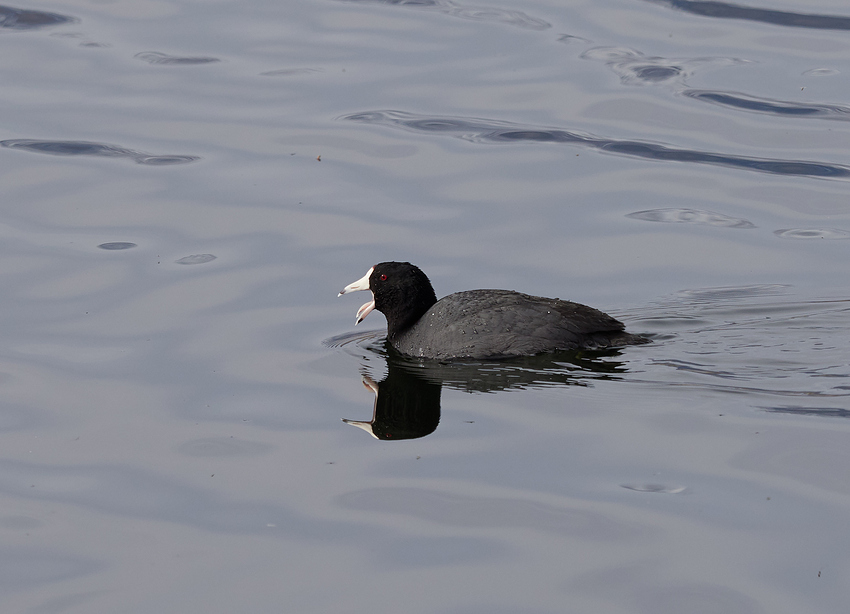 Here is the same photo after being run through Sharpen AI: 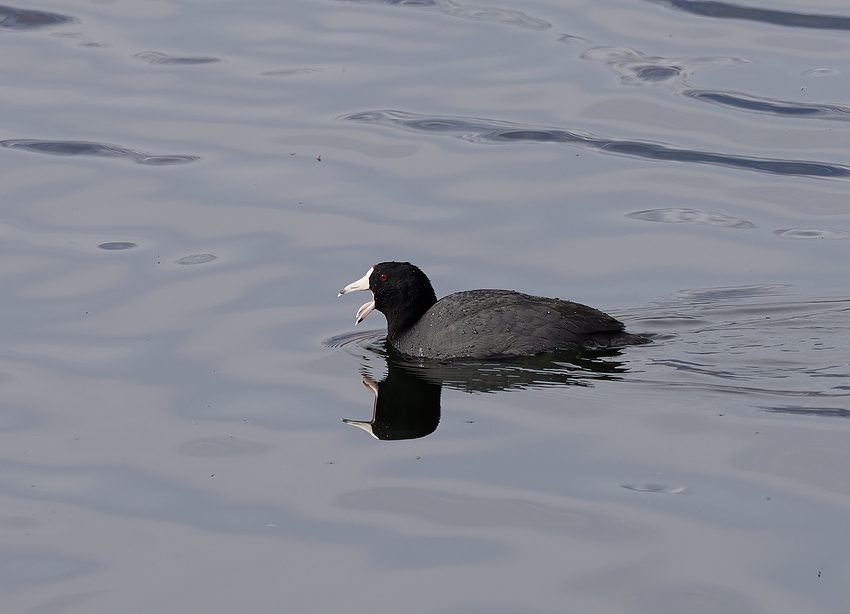 This is also an example of the issue you talked about before. I only wanted the bird sharpened, not the water waves around it, but Sharpen did all of it.

A few photos like this one make the app seem worth the cost, even if only used occasionally.

I ran a test of AI Clear, Sharpen AI (SAI) and those two combined. Below are the results. You can clearly see that the overall best is the combination of the two but this may not be needed on many photos. This was a hand held photo at 1/500s using a 18 - 250mm zoom 16Mpx shot. This is a small section crop at about 82% enlargement. SAI Stabilize only would have probably been a bit sharper at 0.5 instead of 0.3 but I didn’t want to over sharpen. Also, the camera focal point was on another subject closer to me.

One thing I found out is that it is possible, if you are careful, to gain some additional sharpening after using Sharpen AI by using the basic sharpening tool in whatever editing tool you are using. For example, I found that if I turn sharpening off in my workflow tool, send the image to Sharpen AI and then, after returning the sharpened image back to the workflow tool I can then use a small amount of the workflow sharpening tool on the already sharpened image without generating artifacts if I am careful and judicious in the use of the sharpening settings.

I use Dxo’s Photo Lab and I can use the built-in Nik U-Point functionality to limit the sharpening to just some restricted areas, and that works well as well.

I was sufficiently impressed with how Sharpen AI savaged some questionable photos from my last trip to buy it.

Being able to selectively sharpen can be a useful option and maybe Topaz could add that feature to SAI in a future update.