In attempting to download SharpenAI, a week ago I sent an email request for help. So far I have not heard back. In another thread, I was given to understand that there was an issue at the server end. Since the problem persists despite repeated and various attempts to download, I decided to submit a help request via the page at https://help.topazlabs.com/hc/en-us/requests.

For some reason unknown to me, I get the message that the requestor is suspended.

I’ve never received any notification of any type of suspension. A couple of years ago I was asked not to submit multiple requests unless I knew the problem was not already being looked at, which is hard to determine, but I ceased submitting any help requests. (I believe my concerns dealt with photoFXlab, of which I was a fan but wanted some improvements, most of which have been addressed by Studio.) But I never received any notice that I was suspended as a requestor.

I’d really like some help downloading SharpenAI as well as determining why I’m suspended. I would really appreciate it if someone would contact the staff at Topaz to let me know what is going on.

Can you place a screenshot of the message appearing in your browser.

Also what browser do you use? And could it be a message from your Internet provider?

Browser is Firefox. Per the screenshot, not a message from either ISP (CenturyLink and Verizon). 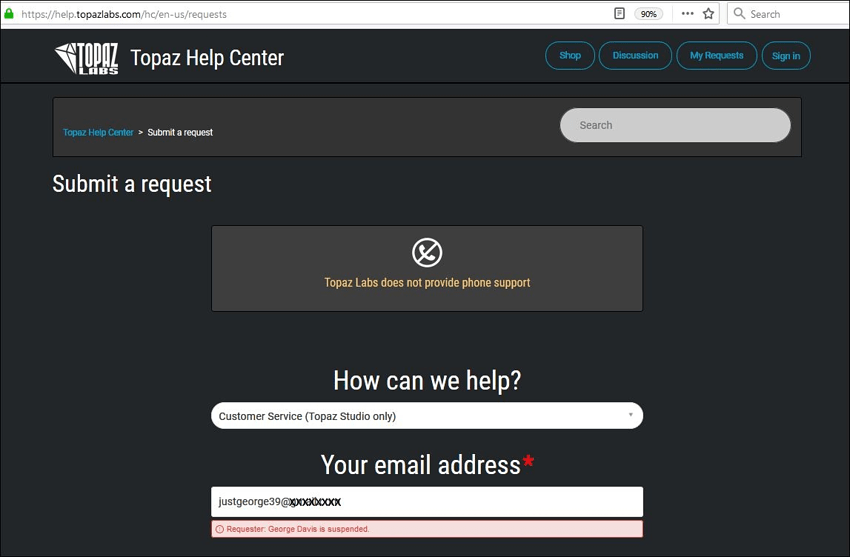 I have alerted Support, how many support requests have you submitted?

Via the Help Request site at https://help.topazlabs.com/hc/en-us/requests, none in about 2 years – that’s the site that says I’m suspended. Via the help @ topazlabs.com, two (the original, plus a follow-up today).

Thanks for alerting support, Don.