Request for TS2: Ability to Customize Categories of 'Looks'

I have moved hundreds of TS1 presets over to TS2. I would like to be able to make custom Categories of Looks, so I don’t have to scroll down thru all of them. Sometimes I get a lag as my CPU struggles to catch up with displaying the sample views…and many times I already know what effect (‘painting’, ‘glow’, ‘subtle,’ ‘extreme’, ‘black and white’) I am looking for and this just slows down my work.

You didn’t mention if you are using Windows or Mac. On Windows you are able to go to the “diskid>:\ProgramData\Topaz Labs LLC\Topaz Studio 2\Looks” folder and simply create a category and drag the Looks for each of those categories from your “My Looks” category. 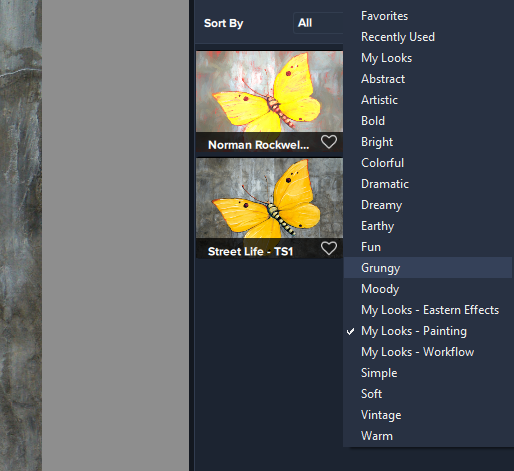 And in the ProgramData folder I have this structure: 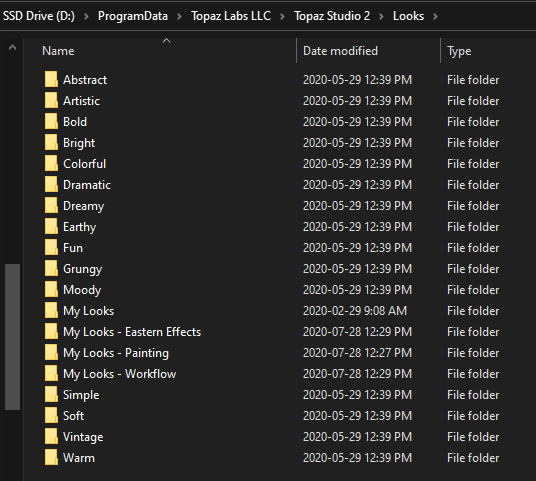 If you have a Mac you will just need to find the folder with the looks.

Don, Thanks for this assistance. It has helped me realize that… apparently I have an installation problem!

[FWIW, I also have Studio1 installed (I sometimes use it as I do like the UI better), but I don’t think that’s relevant here. What may be is… I had Studio2 from the beginning, and have kept it updated. But somewhere along the line (despite always opting for the express/standard install), Topaz’s install has placed files in two places on my systems/programs disk?]

In Win File Explorer I searched for .tpr files to see where mine are, compared to yours: I found my hundreds in “C:\users{myname}AppData\Local\Topaz Labs {NOTE: NO COMMA NOR LLC}\Topaz Studio 2\Looks\My Looks”. But when I tried to amend them (corrected a misspelling in one file’s name… deleted another file etc), these changes were NOT reflected upon opening up Studio 2 afresh*. Not even after Restarting my computer.

There IS another folder in AppData entitled

*I note that I also can NOT get any changes made to Looks – even when I am working within the program – to likewise stick (this is true whether I am using it as a stand-alone or from LR or PS as the host). For example, I have deleted redundant Looks that I don’t want, but they won’t disappear. So, not only do I want to organize the ones I DO want to remain, first I need to get rid of the ‘extra’ ones.

I suppose I need to contact Topaz for a ticket to see their advice? I welcome yours. I presume I need to get all these .tpr files in ONE directory somewhere, so I can cull and organize…but one directory that the program is going to use!

I am willing to do an uninstall and fresh install but have to be sure that I am not going to lose any migrated TS1 Looks (I can copy .tpr files to a backup disk for example, but need to know how to get them imported back correctly.) I do not want to uninstall Studio 1, of course.

I note that my Windows Control Panel| Installed Programs shows I have only one Topaz Studios 2 installed, v. 2.3.1 [Installed 1-27-19…but it also says it installed Topaz Star Effects 9-22-19 (I bought it when it first came out, which was very much before that!) and Studio 1 on the 9-22-19, but that too was purchased early on, so I don’t know about how that date is determined… also I have had other Topaz programs over the last several years and Topaz Labs as publisher has appeared over time as Topaz Labs, Topaz Labs LLC and Topaz Labs, LLC.

Thanks for any insight/advice.
– DL

My Looks are now located in C:\Users\YourUser\Documents\Topaz Labs LLC\Topaz Studio 2\My Looks

I tried creating a directory there and one level up, but Topaz Studio 2 does not recognize the new folder. I am guessing that moving my looks to the ProgramData folder would create the category. It is a cumbersome process to have to move files from Documents directory into a administrator controlled ProgramData directory.

It would be so much simpler for the user category feature to be added to Topaz Studio. And while they are at it, allow My Looks applied nested level filters to be moved out of the look filter nested level to the top level, just as you can move filters around at the top level.

My Looks are now located in C:\Users\YourUser\Documents\Topaz Labs LLC\Topaz Studio 2\My Looks