No you need that Layer. In my experience. Perhaps someone more knowledgeable can help. I’m not having the same problem with Studio 1.5.2 by the way.

Thanks for the reply Barbara. I don’t know what you mean by making sure the image coming from PS is flat. I load a psd version of the image into PS. Then I duplicate it to make a layer. Then I open Impression in Studio. Several times today I tried just using a preset without any additional adjustments, then hitting apply. The same thing happens every time as I’ve described.

I don’t think Studio accepts PSD files… change your image to a tiff or jpeg and see what happens? And make sure you make a duplicate layer of the original background first.

Thanks for following up Don. Yeah, I messed up on trying to send screenshots. But my description pretty much covered it anyway, with the transparency showing in the layers panel in PS after returning, and only the original background image in the main window, or sometimes no image at all. PS fixes itself for other uses after I do a restart on the iMac

It could be a PS problem but I’m not having a problem going in and out of any of my other plugins, like the Nik collective or even Topaz B&W Effects. And the problem started in Impression a couple of days ago, with the earlier version. Any time I tried to zoom in, the program froze. That seemed to resolve when I updated to 1.5.2 but this other issue is beyond me.

When you hit Apply in Impression, should you not see a largish thumbnail of your altered image under the main screen and beside the original image from PS? All I get every time is a checkerboard transparency.

I’ve tried sending the image from PS after creating a duplicate layer and without doing that as Barbara suggested in one of her replies. Sending only the bg image brings up a dialog box saying “the transparency layer created in Topaz Studio cannot be saved back to Photoshop unless your first duplicate an image layer in Photoshop.”

So then I go back to duplicating the image in PS, apply a preset in Studio, hit Apply and OK and it doesn’t send my newly processed image back to PS.

I don’t think Studio accepts PSD files… change your image to a tiff or jpeg and see what happens? And make sure you make a duplicate layer of the original background first.

Files (layers) passed from PS are passed in the format that the plugin requests which means that when you use PS you can send anything to any plugins.

I have the same problem, I’m wondering if this was resolved.

I had a similar workflow question in regard to Topaz Studio and this thread is specifically what I was wondering. I’d love to test this but still waiting for the Topaz Studio Photoshop Utility batch file to be fixed so I can install it as a menu item in Photoshop CS6.

I’ve had the stand alone version of Impression 2 for awhile and was a little disappointed that it wouldn’t open PSD files, but I’m assuming now that its not recognizing layered file formats is by design. Not a big deal really. My normal workflow is to duplicate a layer before applying any of the effects so hoping the Studio route will allow me to stay in Photoshop & simply send the one layer to it.

So in order to run some quick tests, I flattened & saved off to a TIF. In doing so however, I discovered something and am no wondering if it’s related.

Saving off as a TIF in Photoshop will retain Alpha channel(s) unless you specifically remember to uncheck that option in Pshop’s first dialog box. The second dialog is for TIFF compression and even though the Save Transparency option is unchecked (yet grayed out), the alpha is retained no matter what if you forgot that in the first step.

So, since I work with Alphas channels A LOT, that leads to to make a

Topaz Studio needs the option to disable or delete a file’s alpha if present. If I open a file with an alpha, the transparency gets applied and there’s no way to have it not do that. Yet, in the Preset panel it’s displayed w/o it. See attached. 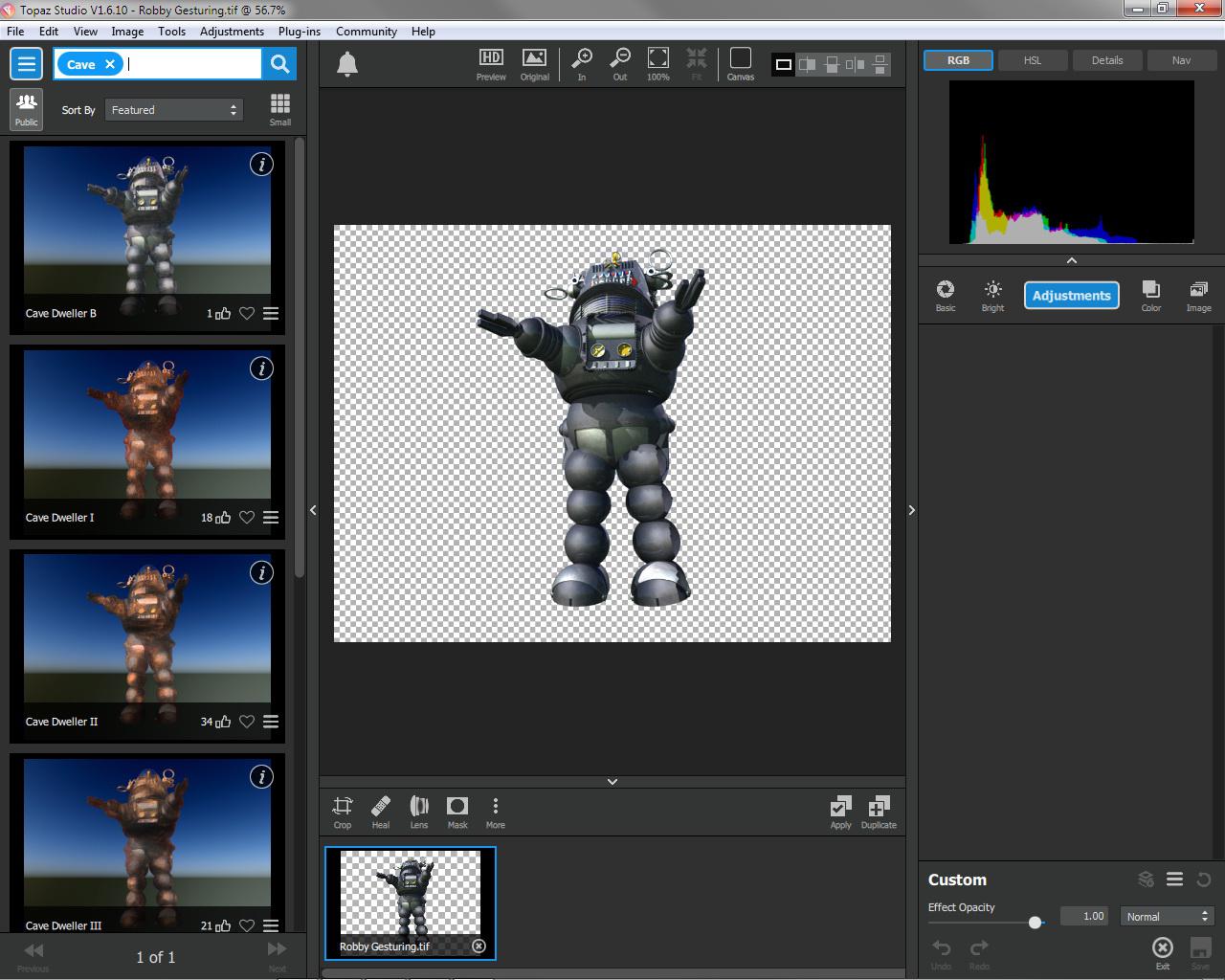