I’m trying to create a workflow with the best possible quality so I’m outputting as a TIFF image sequence, which I’ll then encode to a h.265 with FFMPEG using good quality settings

I know PNG only supports RGB color space, but TIFF does not have this limitation. Yet, when looking at the images produced by VEIA, they seem to be in the RGB color space, example metadata from GIMP below.

Is there any way to output an uncompressed image stream without converting to RGB color space? I admit I’m relatively new to this, but my understanding is YUV -> RGB -> YUV would be a lossy conversion which I’d like to avoid if possible. 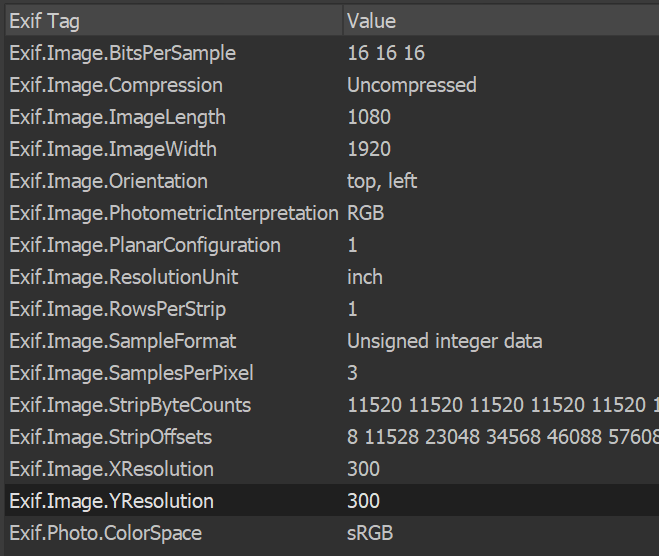 If the source is YUV444,422,420
If the algorithm the program uses for the YUVxxx-> RGB8 doesn’t use floats or doubles then the conversions is lossless. If it does use floating values then there is a precision loss but it’s visually lossless to your eye.

The issue is now converting to h265 YUV420 from RGB. I don’t think you’ll get the same subsampling
due to the interpolation values (maybe) but I sure you won’t be able to tell the difference… This is assuming that no other color space changes were made to the video after the conversion to rgb and sending in to h265.

I actually might know your issue because I’ve thought about opening up a feature request for a lossless codec like UTvideo (which supports YUV and RGB color spaces and subsampling options losslessly). However since Topaz exports Prores422 HQ and you are going to a lossy format in the end any generational loss you get outputting to prores is going to be dwarfed by the h265 loss which will probably alter the minute artifacts that prores introduces. Meaning that if on someone’s face a few pixels are blurred (that you only notice when zoomed 200% in and staring at it using a monitor for a minute) that section will be destroyed by h265.

My restoration flow is:
Source video -> premiere -> out with utvideo matching the subsampling -> topaz -> out as prores-> handbrake or avidemux.

If Topaz was using Prores LT, Proxy, or even standard I would probably get more annoyed but HQ is basically lossless as long as you aren’t cycling through it several times.