I seem to be unable to update the product ownership of my AI Gigapixel product. Apparently there should be a menu bar - which is not showing on my installation – so I cannot access the help menu to update. See image here: 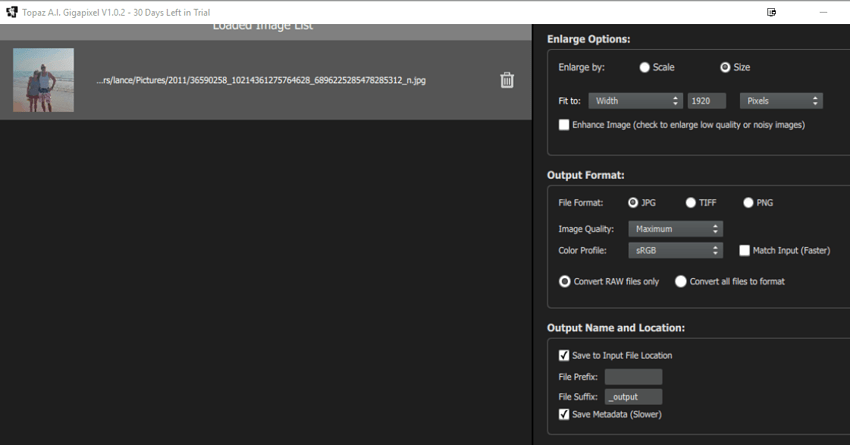 Are you using the trial or did you purchase it… there should be a menu bar at the top of the window if you own it?
Topaz is working on some fixes regarding update ownership, I heard on the webinar yesterday that Topaz will have an update in the coming weeks.

I am using the trial – and have now purchased the product and need to update the software so it knows it is no longer a trial. I am aware there “should be a menu bar” - that is why I am asking if there is some reason it is NOT THERE

have now purchased the product and need to update the software so it knows it is no longer a trial.

I own it too, but it still states 0days left in trial at the top… this is another reported issue that Topaz knows about and is working on a fix.

I would uninstall and reinstall it and see if that helps?
I’m on a Mac and the menu bar does appear for me, but the menu appear is at the top of my desktop window and not in the AI GP window… GP is a Standalone product and not a Plugin…see image below:

I have uninstalled / reinstalled 2 times with no impact to the issue. It is really frustrating.

I would then send in a support ticket, if no other Windows user replies to this post. You may also want to use the invite button below to try reaching a tech… like @JoeFedric-TL?

The menu was absent and the expansion was locked at 200% in the trial version that I downloaded for my PC. I assumed that it was because it was a trial version. I bought the product after an online webinar ( I think it performs very well) and after many attempts, the trial version was supposed to be removed and the paid version installed. My menu appeared then disappeared. My buttons are sometimes active and sometimes not active. FRUSTRATING!! Any suggestions?

First time using a forum of any kind, so not sure what the etiquette is.

It would be very nice if Topaz Labs monitored and responded to these forums. It is very disappointing that I have purchased this product and cannot install it properly.

After much experimentation, I found out that I could actually make selections by placing my pointer about 1 millimeter below ANY radial button and clicking. Similarly, if I imagine (pun intended) where the menu should be and place my pointer there and click, I would actually get a sub menu! I don’t know if my issue is due to a 4K monitor. Considering how well the product works at up-scaling and the workaround that I found, I will continue to use it. Good luck in finding a resolution to your AI Megapixel issue.

We’ve fixed many problems in A.I. Gigapixel 1.1.2, please update to correct many of the problems reported in 1.1 and 1.0.

It is now well into Nov and I too am having problems Updating Ownership. It is on the top menu bar, but when I click on it nothing happens. Any solution?