I have an RX570 GPU with 8 gig of memory. When I look at Grahics Information (see below) in any of the Topaz AI apps that I have (Denoise, Adjust, and Sharpen) under Video RAM it states 8192 MB Total 4096 MB In Use. Does this mean that the apps are only using half of the available video memory or is this a Windows 10 setting/limitation.

Thanks in advance
Jim

Typically, this means that other applications running on your system have consumed the “In Use” amount. Note that at one time, there was an issue that caused this to read in correctly.

For example if you launch an application from Photoshop as a plugin, photoshop is consuming part of that memory as well as the topaz application.

Thanks for the quick response but I’m still a little confused. i closed every program so the only thing running is the operating system. I opened SharpenAI as a stand alone and memory in use is still 4096MB. I opened Task Manager/Performance and it indicated very little CPU memory being used (See first screen shot). I processed an image in SharpenAI and the task manager indicated CPU memory usage never got above about 15% of the total memory (See second screen shot). So even though Graphics Information shows that half of the CPU memory is being used (4096MB) it does not agree with Task Manager/Performance. 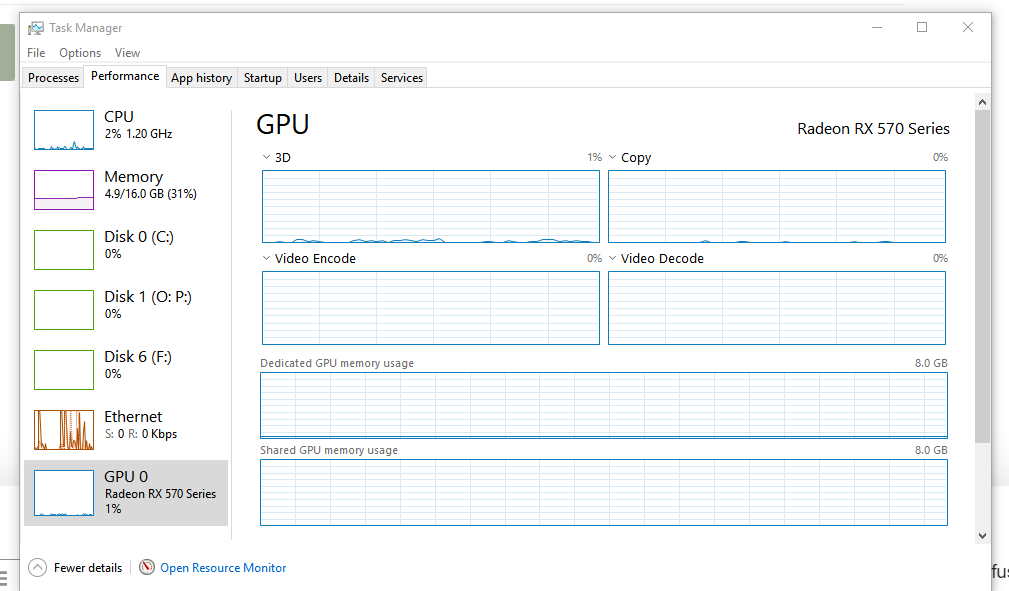 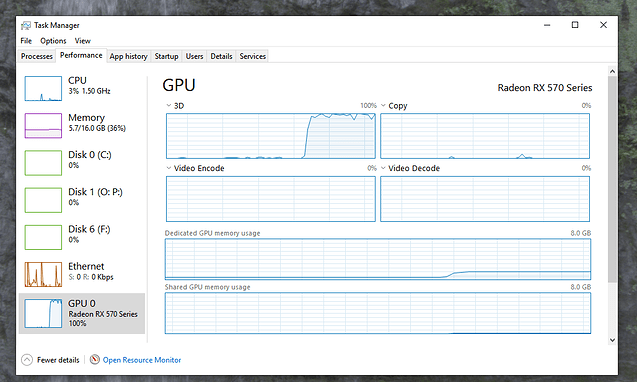 This puzzled me too! With no other apps open, and no image loaded, all my Topaz apps show nearly all my GPU being used: 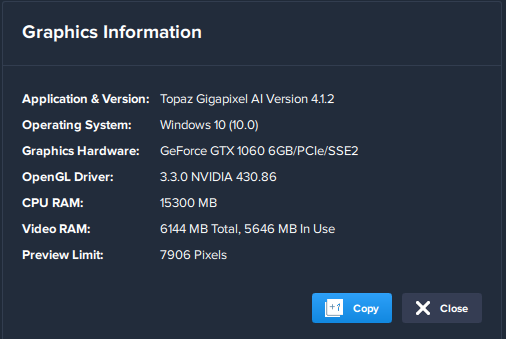 Mine is even stranger. I have 4GB of GPU ram but the info states that 6.144 GB are in use. I do have a browser open and no picture in Gigapixel. I think there is an error in the measurement.

Here is what Task Manager shows:

Thinking about upgrading my Nvidia 1050Ti - any suggestion would be most welcome from TS or other forum members. I’m finding my current GPU is maxing out the 3D part of the system (96-100%). Considering the Nvidia 1660 super 6gb. for win 10 pc.

About 2.5 years ago I upgraded to a 2 GB NVIDIA 2 GB card, which put me in the comfort zone for Studio1. Some months later along came Gigapixel, the first of the AI apps which put me right at the minimum. So about 15 months ago I upgraded to a 6 GB 1060 which put me at the optimum level - now the optimum level is 8 GB, and we also have VEAI which is even more demanding, so I’m already thinking about when I might need to upgrade again. So, the only advice I feel qualified to give is this - don’t just think about what you need now, think about what you might need a couple of years down the line.

Thanks for your insight.