Gigapixel AI models should get improved

In my opinion, Gigapixel AI need significant improvement, it never gave me good results. Only RealESRGAN and other open source AIs or models gave me good results when scaling real life images. We pay a lot of money for this software and I don’t think it’s fair that it generates such bad results compared to a free AI.

I’ve made a comparison view “RealESRGAN VS Topaz Gigapixel AI - Imgsli” between RealESRGAN and Gigapixel AI, just click on the zoom and judge it by yourself.

I’m confused…the GPX processing is on the right of the split window? (standard). 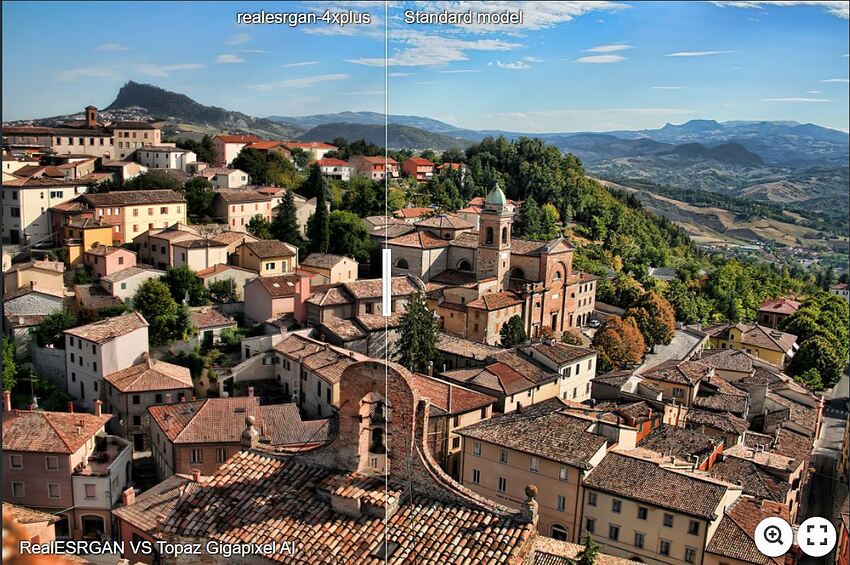 Or is there supposed to be two examples of before/after? (I only see one).

is there supposed to be two examples of before/after? (I only see one).

The web site show a split view of two images.

I have download the original image from the link above and did some comparison by myself.

Here is the result 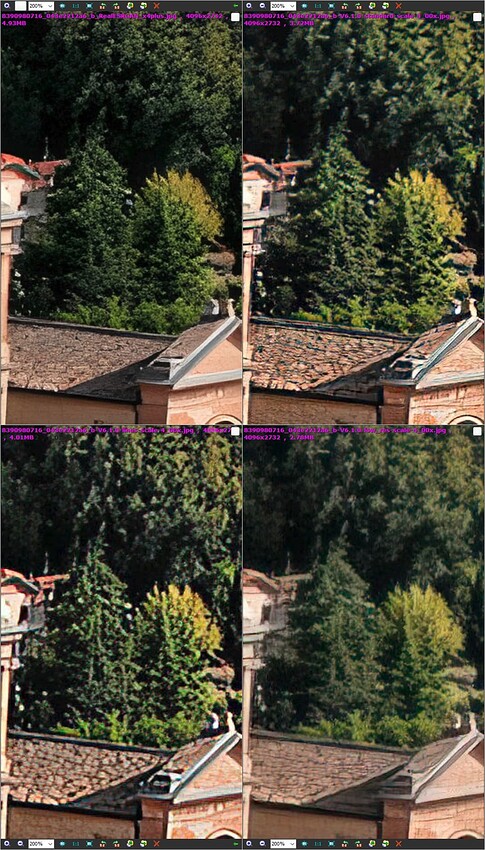 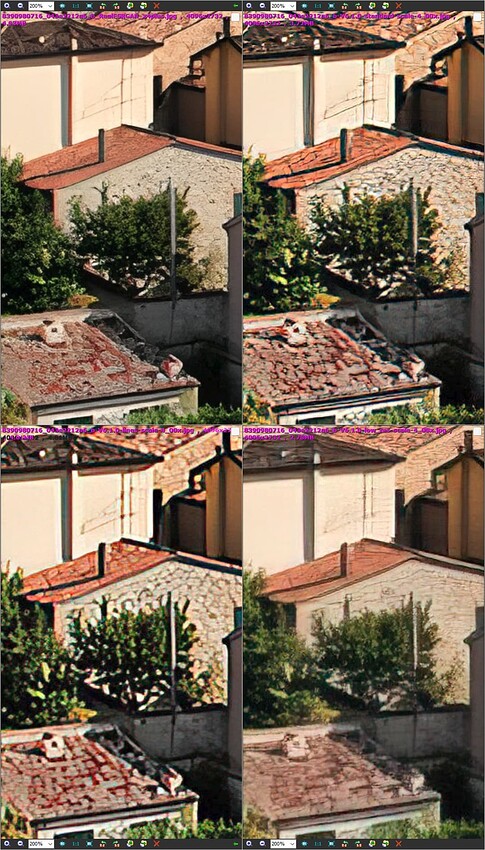 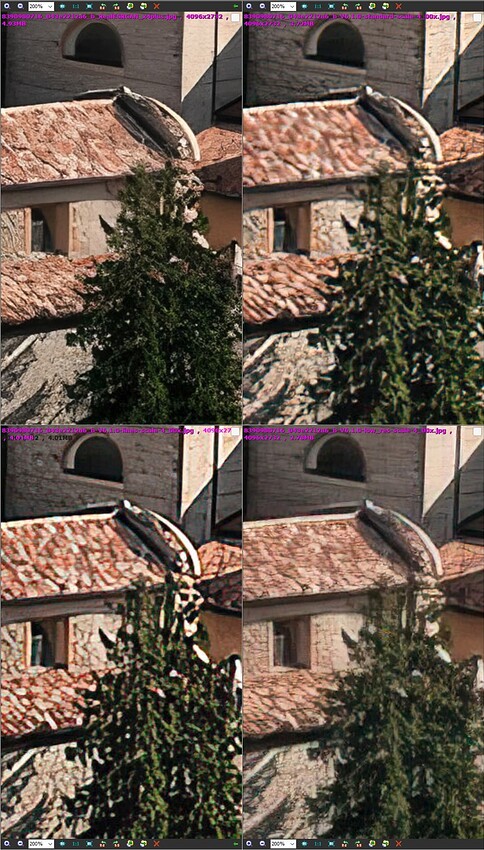 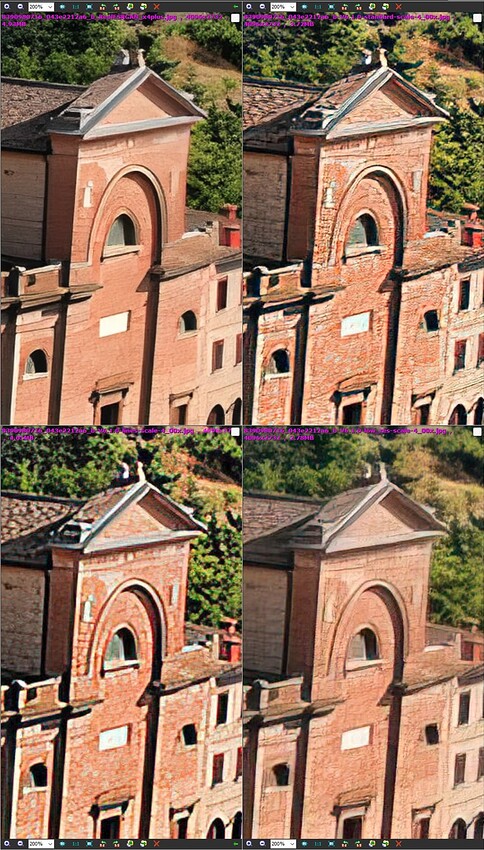 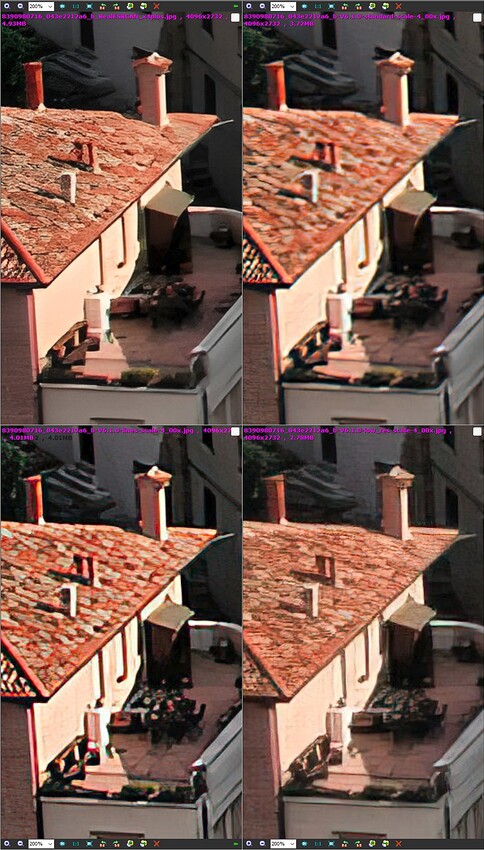 The web site show a split view of two images.

Yeah, I was thinking:

I guess we’re being shown (3). It would probably be mroe clear if the top/R label was:

Gigapixel: Standard model (which I assume is what is being shown).

Gigapixel: Standard model (which I assume is what is being shown).

Believe me, I wanted to try “Lines” model, but it’s worse than the Stantdard one

Hey, Guys. I found another program on the market, that has some unique AI models I found no where else. For vectors and CGI etc. But it also does better job with some type of images, namely the image provided by the original poster. The town scene. I agree. At the moment Gigapixel AI is the best on the market overall and probably the best for images of people and similar type images. But in this particular image, there is room for improvement. Case in point… AI Photo & Art Enhancer from MediaChance. 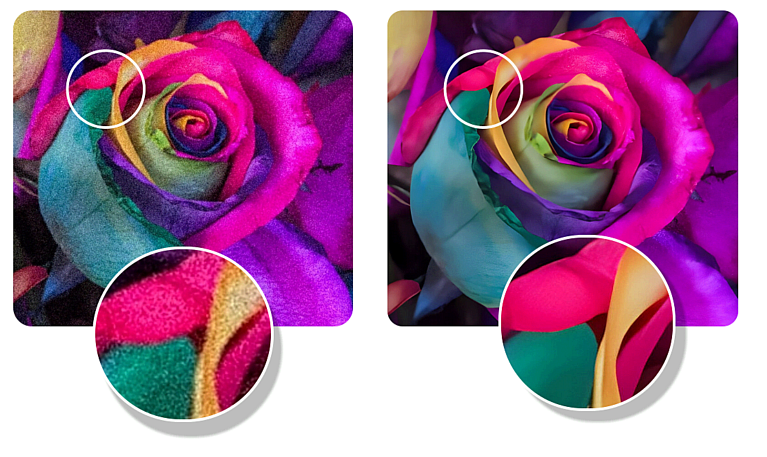 Add incredible detail to your photos and art using artificial intelligence. Increase resolution of photos, up to 16x the amount of pixels.Modern Noise Reduction for photos and 3d graphics. 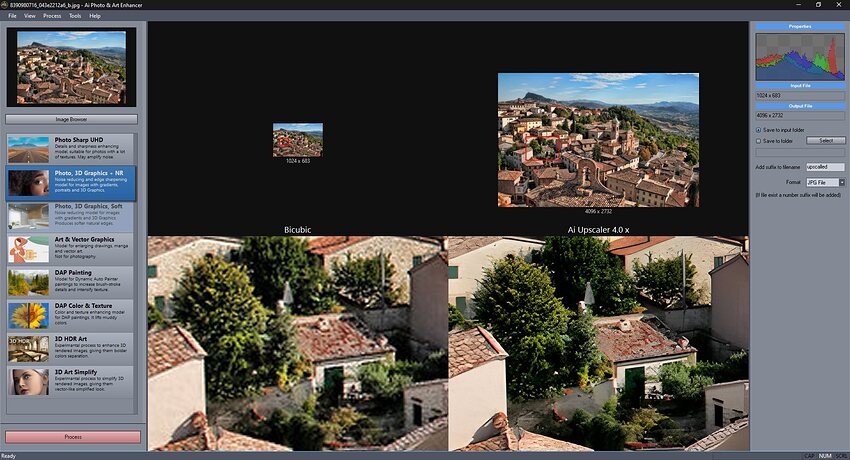 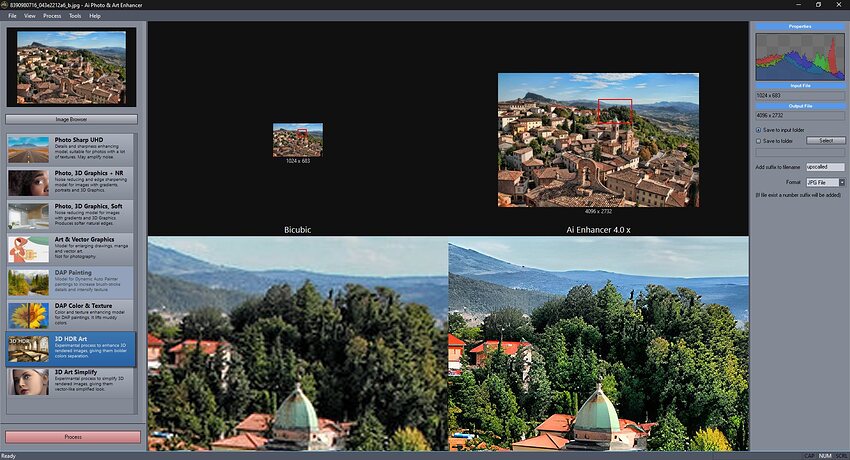 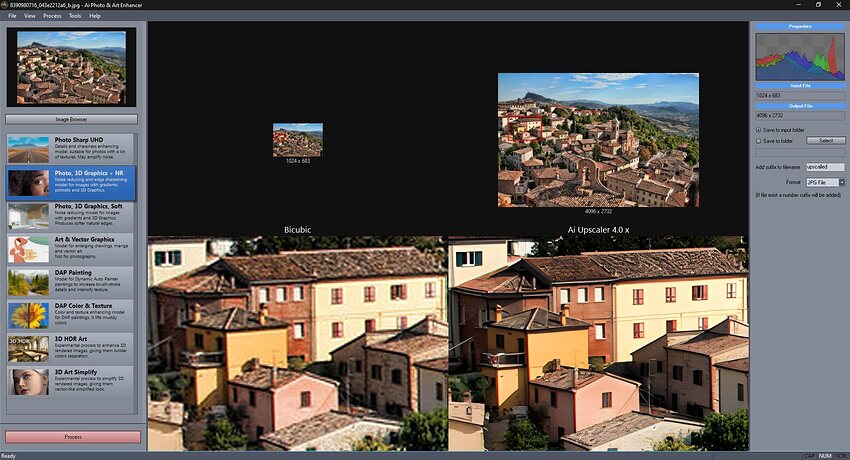 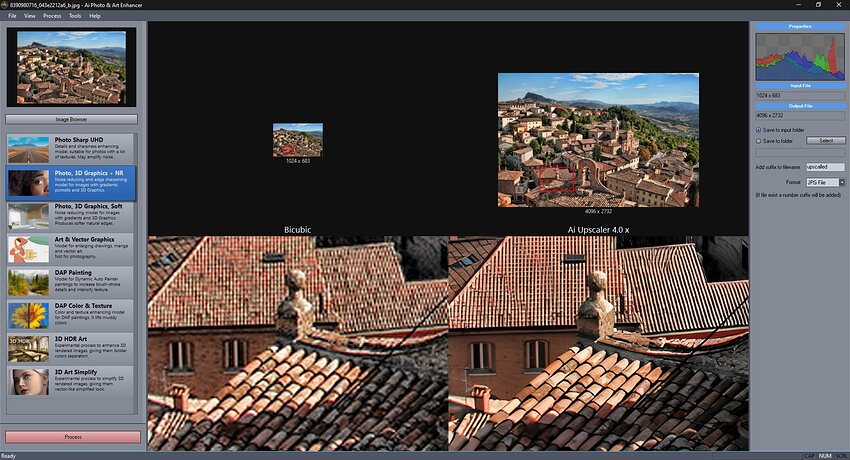 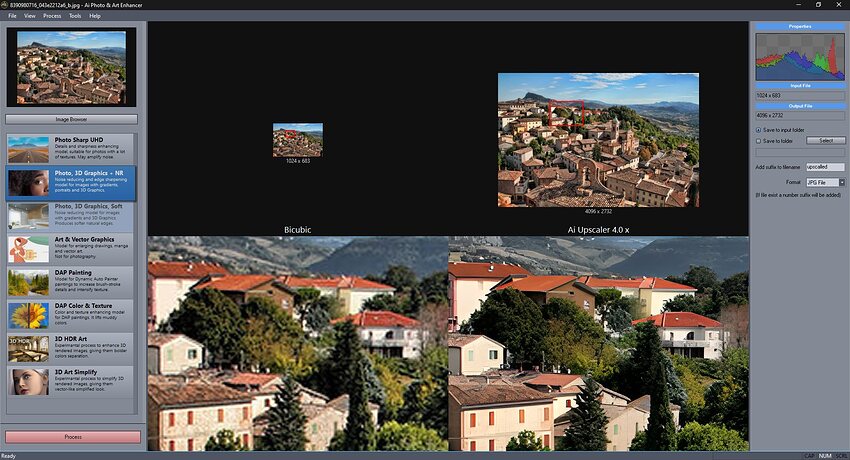 But it also does better job with some type of images, namely the image provided by the original poster. The town scene. I agree. At the moment Gigapixel AI is the best on the market overall and probably the best for images of people and similar type images. But in this particular image, there is room for improvement. Case in point… AI Photo & Art Enhancer from MediaChance.

Here is the result from RealESRGAN_x4plus: 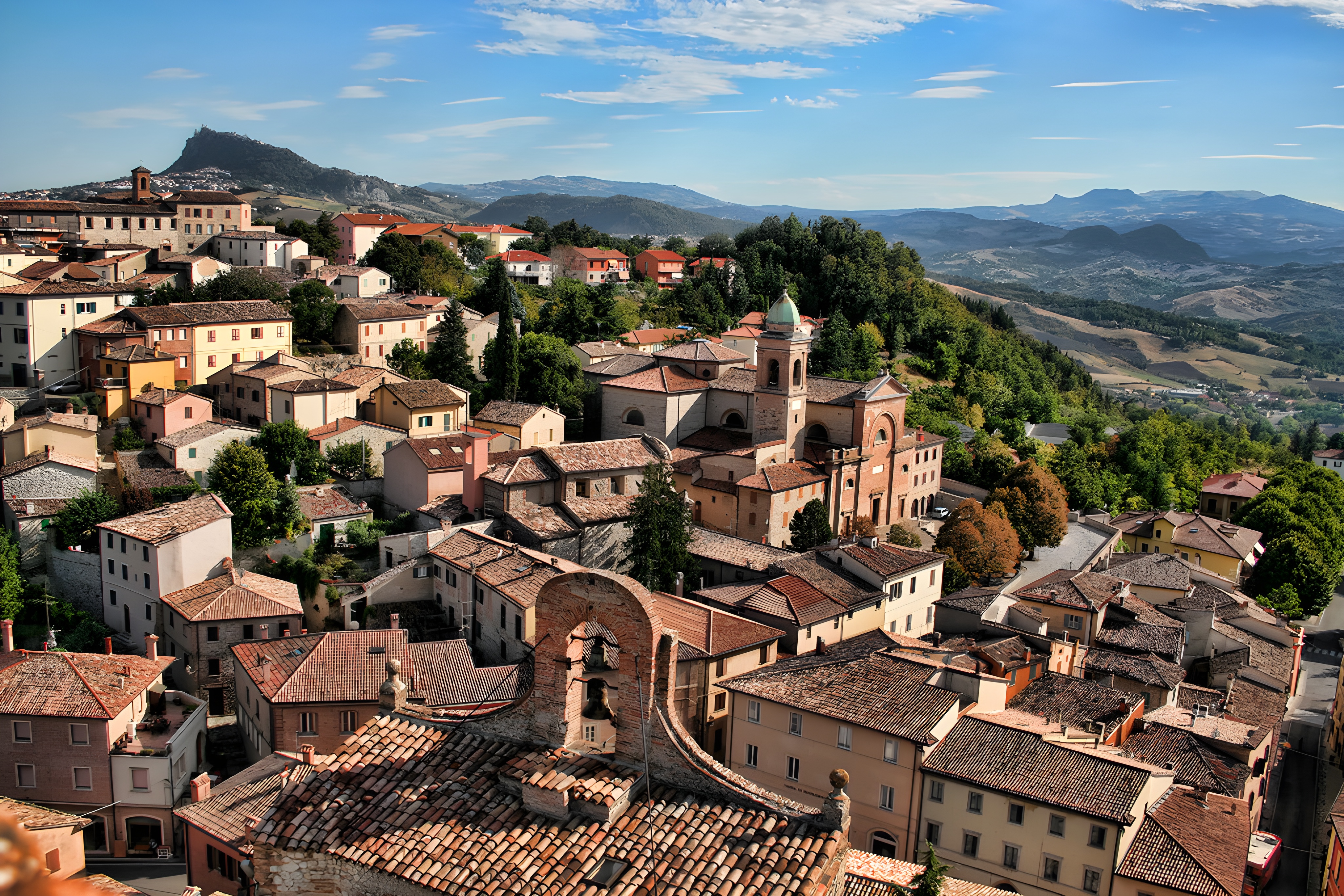 Here is the side by side comparison

The image is near 100% identical to the “Photo, 3D Graphics + NR” AI model from MediaChance PAE.

Sneaky bastards. hehe. Actually , its not bad idea to basically just add free AI and cloth it in user interface for us non tech savvy folks. I think HitPaw AI photo enhancer did the same with faces. I don’t mind as a user and besides, the competition keeps the Topaz Team on their toes.

In general, they should use other open source models. I understand the ego of the Topaz development team, they must have spent a lot of resources and time making the program, training their models etc… but there are better models and AIs on the internet, especially for free. And if they really care about the quality of their programs, they should implement these AIs and models in their programs.
Especially in VEAI, which needs good interpolation AIs. Like RIFE.

Well, competition is good in the long run. I don’t mind Topaz is not using free models and other companies do, but at the same time, Topaz has flexibility of using sliders and multiple settings that other software is not using, because they are not as flexible when they add just GUI to these free AI models. I don’t know if Topaz can modify these models to the point of having flexibility they have with their in house trained models. Also we don’t know what goals Topaz has for future and what they are working on, so I will give them benefit of a doubt. Some of their latest releases have been very stable and fast and nice upgrades.

The point is that it should be improved much more, sometimes I have to use VEAI to post-process images. So I have to convert those images to video before and then once scaled I convert it back to image, which is tedious to do many times. I use VEAI mainly with Proteus as it is the best model for scaling real images.Why isn’t a model like Proteus implemented in Gigapixel?

“Why isn’t a model like Proteus implemented in Gigapixel?”

I’m not familiar with all the ins and outs of the these particular models, but isn’t one trained on video, that is to say sequence of images versus one image. Also resolutions tend to be quite a bit larger for photo work. Assuming you are working with non RAW images, an image is an image I guess, but your workflow is strange. Can you post examples of the kind of results that Gigapixel can’t get and you get better images from Video Enhance AI. I’m curious what is so much better that is worth all the trouble.

I would prefer if they processed pictures correctly.

Product support does not even contact me to understand the matter.

Could be related to GPU drivers. Have you checked that?

I am on a M1 MacBook Air. I doubt I can change GPU drivers.

I’m not familiar with Mac system as much, but if you can change or update drivers, that might be solution, because I saw new drivers from nVidia are optimized for Gigapixel new release. If you can’t change drivers, maybe see if you can switch from GPU to CPU in the settings of Gigapixel and see if that helps. If it does, than probably its related to drivers of the GPU. Maybe Apple will update it, or Gigapixel will release new version. That’s the best I can think of for now.

I have done the switch from GPU to CPU. No change.

Sorry to hear that. I cannot think of anything else that I would recommend.