Hi,
I found out that using my Nvidia Quadro A4000 Gigapixel AI produce more blurry images, also they are offset down by ~2pixels, compare to original (bicubic scale) or processing with CPU or intel GPU.
So I made some tests using CPU, Intel GPU HD 630 and Nvidia Quadro A4000 using low and medium memory settings, but since difference between low and medium not so noticeable, will only post all 3 images with medium memory settings.
Other settings used are : AI model Standard, Suppress noise and remove blur 50, Reduce color bleed and Face refinement are OFF.
https://postimg.cc/gallery/v9HCMH1
On provided examples it is clearly seen that using CPU and Intel GPU Gigapixel scale and process the image, but using Nvidia Quadro it is scale, but not process image or process is not so good (sharpening, removing blur and so on)
My PC config is CPU i5-8500, 32GB of RAM, Nvidia Quadro A4000
Gigapixel AI 5.6.1 Trial with enabled model downloading (models were downloaded before processing images).

Nvidia Quadro is the second adapter in the system and has drivers version 471.68.

You are not using the Quadro 4000 according to that info. Have you set it in your preferences? You can select it from the list … how much Video RAM does your Quadro 4000 have? 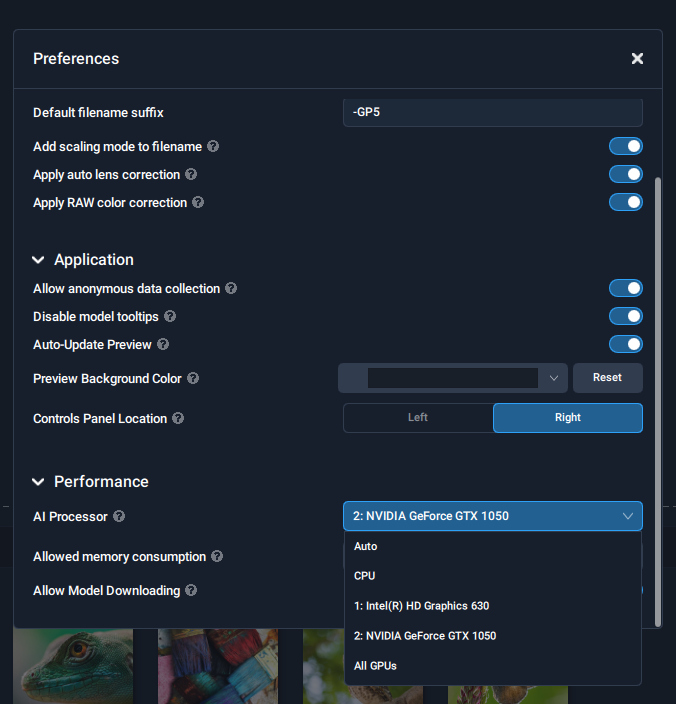 Note that the Intel i5 is a minimum requirement along with a GPU that has 2GB of dedicated vRAM. The HD630 integrated GPU has 127MB and uses up to 1.5GB of system RAM.

Did you read my first post or just replying some random stuff ?
I can set in Gigapixel settings what to use as AI processor and it is processing with selected device. Just the result is different for CPU or build in GPU versus Nvidia Quadro.

Did you read my first post or just replying some random stuff ?

I read your first post … what is the vRAM is it at least 2GB?

And what settings did you use for the Quadro … memory that is?

You need to give the whole story not just what you think is relevant.

The amount of RAM for iGPU is enough

120MB is not enough an it isn’t a question of crashing. Try running the Quadro at medium or high memory consumption if it has 16GB.

Again, try to read the first post, using iGPU and CPU Gigapixel produce good image without issue.
The main problem, that using Quadro it’s made more blurry image, not so crisp than using CPU or iGPU.
Also did tests with high, CPU and iGPU is very good images, Quadro is more blurry and offset down by 2pixels.

Why can’t you just post the graphics Info when the Quadro is being used by Gigapixel?

Main GPU is set to iGPU and it’s the one connects to monitor, Quadro is second one and has no monitors connected to it. So Gigapixel will always show my “main GPU” in graphics info, but can use the one I selected in settings.
This is the best setup when you do a lot of Machine learning with python or using programs such as Gigapixel, so your desktop is not freezes during training or image processing.

It won’t always show your iGPU, if the Quadro is selected in preferences it will show that info.

Go to preferences which is under the file menu and select it there.

How possible that such stupid person become a tester.
In my previous reply there is a screenshots where it’s selected and also did I say that it doesn’t work with Nvidia Quadro ?
I’m only trying to say and show, that processing with Quadro is not so good as with CPU or iGPU.

What a surprise, I saw here on the forum that older versions process images better than the new one. So I took the one from a friend, which told me about this product, and indeed, with version 4.4.5 Nvidia Quadro does good images, without offset down by 2pixels and not so blurry.
So it’s the issue with new version of the product.

You need to learn manners, your images showed selected in preferences, that was just for show as the graphics info shows the iGPU.