Drone restrictions are too much

I was interested in getting a drone for photography. A really good one with extra batteries would cost around $2000 or more. I did some investigation about where recreational drone flights were restricted and I expected they might be around airports and in downtown areas where there are a lot of people.

That wouldn’t bother me since i wanted to get some aerial photos in national parks or wilderness areas. Canyon De Chelly comes to mind. I found a map that marks restricted areas and it showed that all national parks and monuments in the US as well as most wilderness areas do not allow drones to be operated. This is ridiculous since it is these areas where you can get the best scenic photos and often no people where it would fly. I gave up since the cost far outweighs any result I could get. If you are thinking about a drone for scenic photos, give this some consideration.

I use a drone frequently. I fly in the UK mainly over farmland where I have the permission of the landowner and there are many good images to be had. There are restrictions for ‘hobbyists’ but less for professional flyers. Some restrictions can be lifted if the correct permissions are obtained. Also, regarding national parks, if you fly from outside the restricted area the view across can sometimes be just as good and there are no laws to prevent you from doing this. There is a lot of prejudice and ignorance that surround drone flying that has been exacerbated by a reckless and irresponsible minority and sensation-seeking press, and large organisations have taken the somewhat understandable decision to impose a blanket ban. There has also been a lot of misinformation and hysteria that has been stoked by the media which has not helped. Most so-called sightings reported by commercial aircraft have been discredited, see https://www.airproxrealitycheck.org/april-2019/ for more information, but the media do not report this. Over time, it will no doubt settle down and you should not be disheartened, go ahead and buy a drone, fly safely and within the law and find a place you can call your own, it’s a whole new technique to learn and a very rewarding hobby.

In US that is the problem. That’s why I give up the purchased of the Drone. It is shame that you can’t fly
in the Parks. Airports I understand but Parks that sucks.

Well, besides the limitations on where you can fly drones aren’t there a bunch of new certification requirements that were established in the past few years?

I’d considered a drone a few years ago too for the types of photog you mention. But then all the registrations and limitations were set up that, coupled with the cost for the better drones, didn’t make it seem a feasible hobby. A photo buddy of mine got a nice (aka, expensive) drone right before all the rules were set. I don’t think that drone has been out of the box or closet where it’s stored b/c of policies that were set.

As a hobbyist, you can easily register the drone on line. It is required for any drone between 0.55 to 55 lbs. The rules say you can not take off, land or control a drone inside a wilderness area. It doesn’t say you can’t control a drone from outside the area. The Mavic 2 drones can go 3.5 miles (limited by the 31 minute battery).

No, It says you can’t fly OVER those areas. And has nothing to do where you started your Drone.
If they catch you there is a big price to pay for that.

I’m sure that is what is meant but the wording is vague since the operation is from the controller and person. Here is the wording: 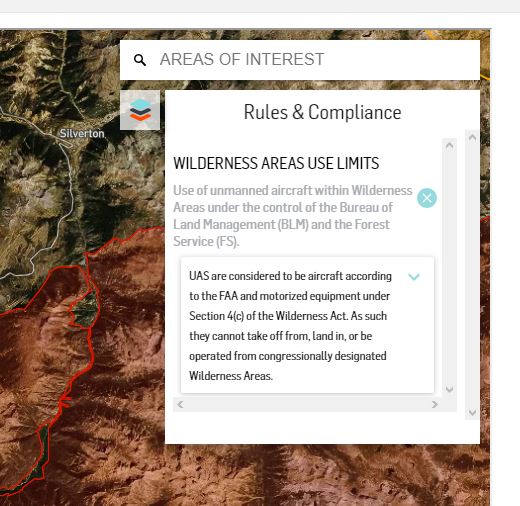 I know that what they say but you can’t fly over the areas because will disturb the WILD LIFE so this is only if you want to fly over a private property. It also says farther down that you need ask for permission in private area.

Basically the law referring to wilderness areas and drones is a stupid one just like the classification of marijuana as a class 1 substance with no medical benefit. The land belongs to the public and has no people in it except maybe a few campers in some areas. A drone poses no danger and now many of then have collision avoidance abilities. The law should have a few restrictions such as no night flying.

If you were standing on the side of a highway and flying to take pictures, how would you know if you crossed the boundary? See the picture below. 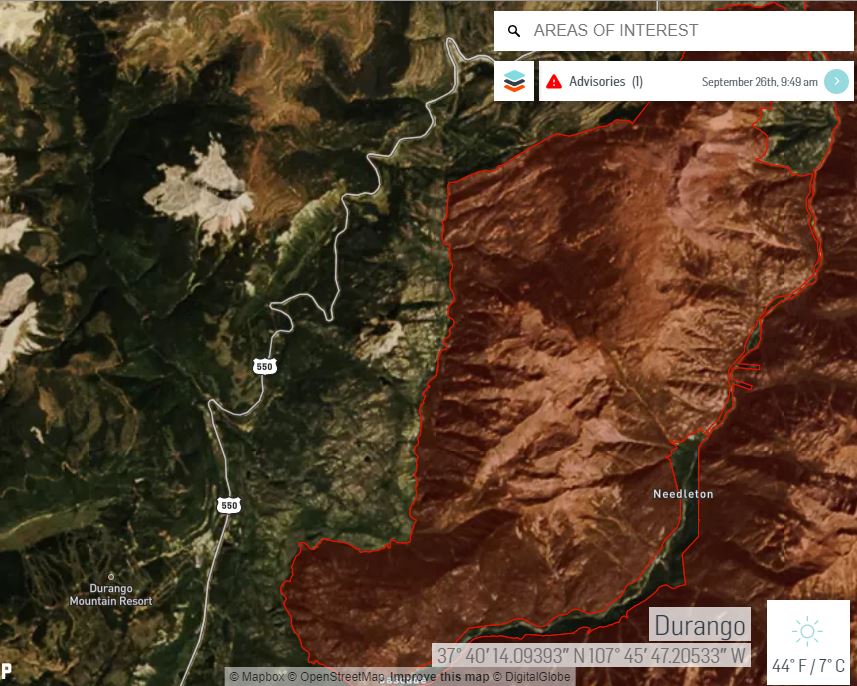 I know what you saying but read this. Only one sample. 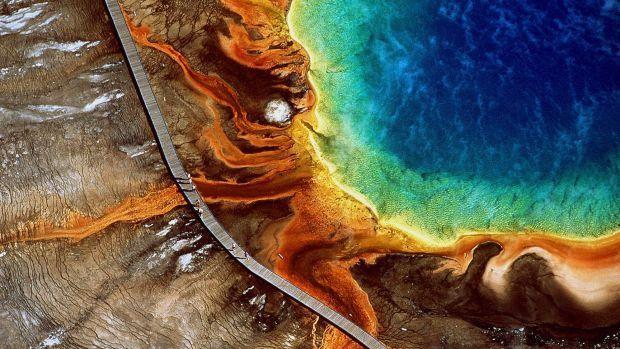 JACKSON — A California-based drone manufacturer is being investigated for promoting its “true follow-me” technology with footage of a Rollerblader kicking it along a West Thumb Geyser Basin boardwalk.

I have been talking about wilderness areas and this is about Yellowstone park (I’ve been there). Though I think there could be some restricted use even there. There are parks where there are few people or animals like Canyon De Chelly in AZ. The laws are not well thought out and they are using a blanket restriction in order to stop irresponsible people.

Nowadays policy makers are erring on the side of overly cautious with regard to what some could choose to litigate as “aerial surveillance”. It’s not just due to wildlife protection, there are other security concerns too in our current world. So policies are CYA. Authors of such policies cannot know you are good-hearted and another person is evil. Therefore they mandate uniformly b/c yet someone else will litigate ‘discriminatory rules’ interpretation (and/or perceived or real damages) if they don’t…

The concept of drones for hobbyist photography sounded fun when 1st introduced.

Have you contacted your regional congressional rep to express your objections?

Ok I will jump in and support the regulations. Drones scare wildlife, lessen the experience of other users of public land and the operators of drones show little to no restraint as a general rule although there are many that are considerate of others and of wildlife. My opinion is if the drone community can not start regulating themselves and their impact on the environment like climbers, river runners, mountain bikers, and others have learned to do they need to be regulated into oblivion. Just my opinion.

This is about All Wilderness not only the YellowStone. I gave you only one sample…

Scaring wildlife is a poor example. Helicopters, hunters, bears, tigers, and other things scare them. It’s part of their nature. Wilderness areas have no people in them except for occasional campers. It is easy to allow drones to fly over wilderness even if restricted in National parks with a rule or law change.

@Fotomaker I haven’t contacted my congressional reps since I don’t own a drone and actually I could find many areas to fly it if I did have one. The problem is the places where I could get exceptional photos, it would not be allowed. I see that the FAA is thinking of requiring drone operators to get a license that requires taking a course. This is stupid as well unless they make it a short online course with a test which could be easily done.

At one time the FCC required people to pass a morse code test to get a HAM radio license. Someone came to their senses and dropped that in 1991 and 2008 (all classes).

At one time the FCC required people to pass a morse code test to get a HAM radio license. Someone came to their senses and dropped that in 1991 and 2008 (all classes).

I presume it didn’t happen magically. People must have lobbied the appropriate parties. I’m pretty sure not all the people who march in civil rights demos are directly affected by the issues they are marching for. One with very strong opinions and an interest in flying drones is more than capable & entitled to lobby rules makers in a calm, reasonable way if said person/people believe policies are not what they personally agree with.

I am bowing out of this now as what I’m hearing is just needing a platform to whine. I know bookstores are all out of biz, but Amazon sells a wide variety of journals to diary with for venting … Good luck.

Scaring wildlife is a poor example. Helicopters, hunters, bears, tigers, and other things scare them. It’s part of their nature. Wilderness areas have no people in them except for occasional campers. It is easy to allow drones to fly over wilderness even if restricted in National parks with a rule or law change.

That would be nice but
Not every person would fallow the rules. Do you think it would be OK to fly close to Eagle Nest, Or go after some animals to see how they run and scare them half way, ETC. There is a lot of IDIOTS that would do those things with out thinking of wild life.
Is like me I take the macro pictures of bugs but I don’t disturb them kill them just because I want to take picture but not every one is doing that.

So I do agree on the regulations even so I have to give up on having Drone.

Not every person would fallow the rules. Do you think it would be OK to fly close to Eagle Nest, Or go after some animals to see how they run and scare them half way,

I think you should lobby to stop hunting since hunters not only scare wildlife, they kill them as well. Limiting the use of drones in wilderness areas because there are a few instances of misuse is nothing compared the hunting but you seem to be hooked on drones. Actually, I don’t think an eagle would be disturbed by a drone, it may attack it if it didn’t like the sound.