It has been clearly and repeatedly stated by the Moderator that this is just a user-to-user forum. Which started me wondering why it is so difficult for the average user here to get the message. The misunderstanding at best leads to frustration. Occasionally it has stirred some less than charitable feelings toward Topaz Labs itself because of how people feel they’ve been treated here.

I say all that to suggest that part of the problem lies in the site layout itself. If you take an outsiders look at the layout and logos, you would naturally assume that this is an officially sponsored and company run site, provided to answer questions and solicit feedback.

A rethink of the UI to better reflect the true nature of this site might save everyone a lot of disappointment, and head off the need to be told about the underlying intent on a regular basis.

It is a user to user forum… sponsored by Topaz Labs.

It should also be evident to all that it doesn’t replace Support on the main website.

No argument, and yet, you’re constantly having to make that point to the users. The evidence suggests that something is fundamentally missing from how this site presents itself to visitors.

It should also be evident to all that it doesn’t replace Support on the main website.

Evident to all is probably not how I would phrase it as people do seem to get confused on this on a fairly regularly basis. And it’s not that hard to see why because it straddles a grey area.

One of the most obvious examples is the existence of these:

Another perfect example here. Why not just have a page in these sections that informs the user what to do instead of the manual redirection? On that aspect, I agree with Andy that this just invites confusion and, possibly, frustration. If I were this person I would be thinking…“why do you have a section to post bug reports if it is the WRONG place to do so?” Doesn’t make sense. 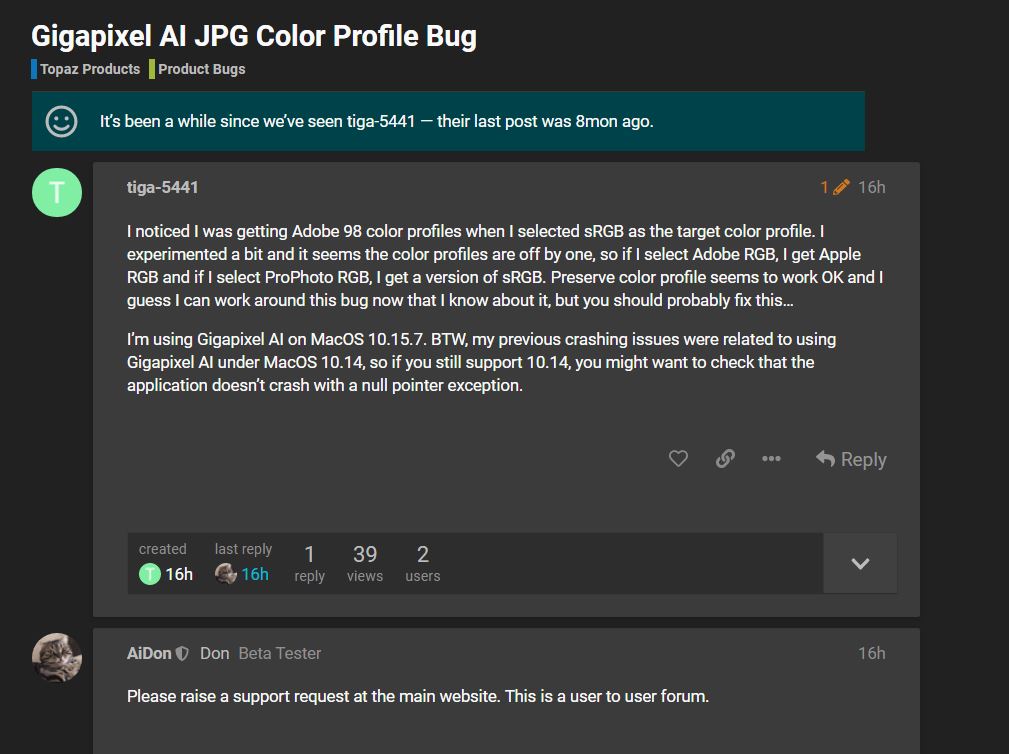 I guess that we could just revert to Topaz Products and use the application names as a heading rather than grouping them as Bugs, Technical Support etc. So we could end up with a listing like this:

I guess as we see in the Product Release sections and the Beta Sections where a specific product is mentioned as a sub-category and as where the Video Enhance AI Discussion is a single top level category:

I might remember wrong but I think the forum has rarely been used as a company to user forum too for example when Eric made his announcements back then.

It used to be a good site for posting images, too, but last time it was overhauled it began cropping images so it became necessary to double click in order to display them. Maybe address this, too.

Totally agree with this suggestion

It can be confusing, especially to newcomers. But it happens on other support forums too, and company participation can vary. For example on the Skylum forum (Luminar etc.), employees are participating very actively, possibly because of problems with the roll-out of Luminar AI. Meanwhile, on the very quiet On1 forums, I have yet to see an employee respond, but the moderator still has to refer newcomers to direct company support. By the way, both these forums use zendesk, which provides a much cleaner UI than the one used here.
I agree with the above comments for improving this site.

It is only confusing because user-forums are handled so differently by various software companies. Many of those other companies have employees actively monitor the forum to be aware of potential support issues and make it easier for people with real problems to get help.

I personally feel that if a company owns the support forum, they should at least take a passing interest in what goes on there. It is still your brand, and what happens or doesn’t happen here will reflect on that brand.