I’ve just upgraded to DeNoiseAI 3.0.2 although I have seen a similar issue with earlier versions. When I do a Low Light conversion, colors seem to turn almost pastel and the original intensity is lost. Background noise is reduced as desired, but at the expense of altering the main colors of the image. For example, in this directory:

DSC_0993.NEF is the raw file from my Nikon D3500, an evening street scene, and the corresponding PNG file is a low-light conversion with 3.0.2. Note how the red taillights in particular have changed from glowing red to an almost invisible pink. The sky has also lost its hue as well. This conversion is also with the Brighten button active - without it, colors are even more reduced. All other settings were set to defaults.

Is there something I can do to retain the intensity of the colors, yet still remove noise? Thanks.

Method 1.
The first was to develop the .NEF file in Affinity Photo, using the default settings. This recognized the 18-300mm lens and applied the correct lens distortion correction. The develop persona in Affinity (by default) also applies a tone curve. Having developed the RAW image, I then ran it through Denoise AI 3.0.2 as a plug in from Affinity. I used the low light option, with the Auto settings (RN=12, ES=49, post processing options both 0). on return to Affinity Photo, saved as a TIFF.

Method 2.
Ran the .NEF image through Denoise AI 3.0.2 used freestanding. The Auto settings would have been (RN=5, ES=42), so changed them to RN=12, ES=49 for the sake of comparison, and again the post processing options left at 0. Saved the result as a TIFF.

Result
The image from Method 2 (Denoise AI freestanding) has not had any lens correction applied, and AFAIK Denoise does not apply a tone curve in its development. As a result the output image done this way looks flat in comparison to that produced from method 1.

Suggestion.
You will either need to develop the RAW image first in a RAW editor that applies the necessary tone curve (and lens distortion correction) first, or you will need to tweak the image post the Denoise process.

The tone curve is specific to the particular RAW format and seeks to match the tone curve that is applied in the camera firmware when you opt to have it export a JPG image.

RAW images can be processed with or without the tone curve, and some prefer to have it that way to give more user control in the develop process.

Thank you for running that test - definitely helpful. For the standalone test, did you still use the low light conversion, in addition to modifying noise and sharpness? Or did you use just the standard noise reduction? I tried the low light reduction with your values and the colors were still much more subdued - just getting what you saw alone would already be an improvement over my results, independent of the Affinity stage.

I haven’t used Affinity, but have used Raw Therapee for RAW conversion - do you happen to know how it compares? If Affinity ultimately produces better images to feed through DeNoiseAI, I’ll definitely look into it. Raw Therapee does have many controls that need to be adjusted - sounds like a “develop” persona would simplify conversion,

For the standalone test, did you still use the low light conversion, in addition to modifying noise and sharpness? Or did you use just the standard noise reduction?

I used the Low Light for both tests. I only changed the "auto"settings in the second test so the same settings applied to both shots. There was negligible difference between images processed using RN=05, ES=42 and RN=R12, ES=49

I haven’t used Affinity, but have used RawTherapee for RAW conversion - do you happen to know how it compares? If Affinity ultimately produces better images to feed through DeNoiseAI, I’ll definitely look into it. RawTherapee does have many controls that need to be adjusted - sounds like a “develop” persona would simplify conversion,

RAW Therapee is a quite powerful RAW image processor, with a commensurate learning curve.
Affinity Photo has a RAW Develop persona, as well as a relatively full function multilayer image editor. Its RAW Develop mode is arguably simpler to understand than RAW Therapee.

Whilst I do some editing work in Affinity Photo, I do most of my RAW Development these days in ACDSee Photo Studio Ultimate 2021. I’ve used ACDSee for asset management for many years, and changed to its flagship version about two years ago. The way its Develop mode is set out suits my personal work flow, and it also has a quite powerful multi-layer edit mode.

Both Affinity Photo and ACDSee Photo Studio Ultimate 2021 are currently able to use DenoiseAI, as well as many of the other Topaz products as plugins, but that is from their Edit modes, not from their RAW Development modes.

As a Sony camera user, I also have Sony’s Imaging Edge software installed, but use it mainly as a reference.

Affinity Photo and ACDSee Photo Studio Ultimate 2021 both by default apply a tone curve for images from supported cameras in their RAW development, and the developed images (using default settings) are comparable (though different brands of software will not produce 100% the same RAW development results). In Affinity Photo, the auto applied tone curve can be turned off. In ACDSee Photo Studio Ultimate 2021, it can be displayed and edited (so is able to be both turned off completely, or changed). The curve below is what is applied in ACDSee to your DSC_0993.NEF Raw image. 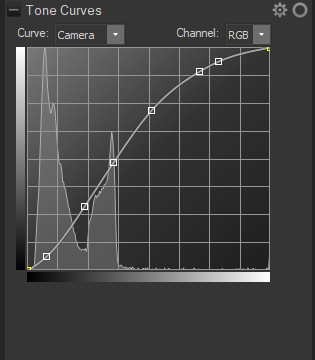 The issue to me comes down to where in the workflow one wants to use Denoise AI.
Ideally noise should be reduced as much as possible prior to making enhancement changes so it doesn’t get amplified in the process. On the other hand, the reason I take RAW images in the first place is to have greater control over the development process, before any of the parameters get baked in.

If you use Denoise AI on the RAW image as the first stage of your workflow you lose some of this ability, and you also then have to contend as a post operation with the “linear” develop Denoise AI does, and that properly calibrated lens distortion correction has not been done.

I personally do the initial develop of my RAW images first. Both my cameras and the lenses I use are supported, so lens distortion is properly catered for in the develop process. With most images the other default settings are pretty close, and a large percentage of my photos require few if any tweaks to get the initial develop to taste. I then export a TIFF image.

For high ISO images with noise, I will then edit the TIFF and use DenoiseAI as a plug in. There is an added advantage of using it a plugin, as any metadata Keywords, Labels, Ratings, Notes etc are better retained. For those using asset management, it is very important that any software used doesn’t strip any of the used metadata.

Things like cropping to suit a proposed project, export sharpening etc are done as a subsequent separate exercise, and exported as separate images, not saved to the primary TIFF.