All of the newest products seem to require high-end gaming processor systems to work at peak performance (incl speed, not just stability). I don’t know who they think the customer base are, but I - for one - am not a millennial, global multi-player gamer, child serial entrepreneur (aka, wealthy), dark Web hacker or anyone else who typically would be drawn to (& can afford) such uber robust systems. I’ve had performance issues with the more demanding GPU designs too in the past 6 months (and I have much more RAM than you and an only 1-yr old PC). We’ll see what evolves.

All of the newest products seem to require high-end gaming processor systems to work at peak performance (incl speed, not just stability). I don’t know who they think the customer base are, but I - for one - am not a millennial, global multi-player gamer, child serial entrepreneur (aka, wealthy), dark Web hacker or anyone else who typically would be drawn to (& can afford) such uber robust systems.

I can’t afford to keep upgrading my computer. Studio 1 worked which is why I bought enough Pro adjustments to qualify for Studio 2.

I want to keep using Studio 2 because I’ve now got all the Pro adjustments. As I use it as a PSP plugin I take my photo into Studio 2 for standard adjustments like sharpen or contrast, accept the result and give it an appropriate file name. I then duplicate this, take it back to Studio 2 for the next lot of adjustments and keep doing this until I end up with what I want. Doing it this way the end result could have a dozen Stylistic filters plus a few from the original Adjust etc.

What’s really annoying me now is Topaz assuming that everyone who could use Studio 1 will be able to view all the GPU intensive Looks they decided to add to Studio 2.

If you are referring to CPU RAM…it’s not so much about CPU RAM. I run most of the new tools quite adequately on 8GB of CPU RAM. However, the key was upgrading the GPU. The entire new system was just a little over $500; hardly big bucks relatively speaking. The key is the VRAM because that is the memory where the image data will be off-loaded to while processing (GPU:VRAM). So, it doesn’t really require high-end HW…it requires spending on the correct resources and it doesn’t take all that much (mainly the line in yellow ie outboard GPU).

So, you would need to redo this after every update?

That has been my experience with TS2 so far

I’ve removed individual Looks and they come back with updates. So I will probably wait.

it requires spending on the correct resources and it doesn’t take all that much (mainly the line in yellow ie outboard GPU).

So, when I bought my PC last year what I got was considered “beefed up” (certainly above the ‘basic’ setup) - at least according to the person who I ran the specs by… In terms of graphics resources, this is what I got (oh, and yes, I specifically got a Win 7 PC b/c I like the interface considerably better than Win 10 - which I have on a little ‘cheapie’ relatively speaking, laptop that I use when giving talks and using PPT): 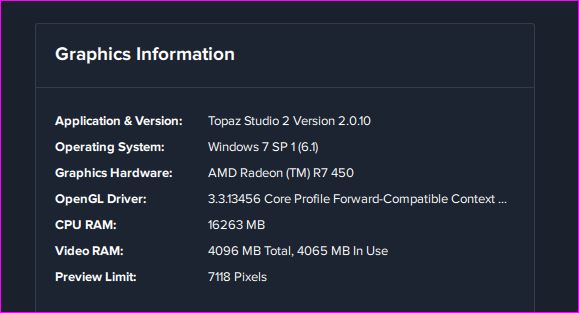 AMD often has Wattmann problems (throttling of the GPU to prevent oveheating)! It may – or it may not – be the case with you!

AMD often has Wattmann problems (throttling of the GPU

That would make sense given some of the issues I’ve had with certain iterations of the products! Darn it. I definitely had to drop to the lower memory allocation options (where offered) to prevent program crashing for the more intense GPU util products. And products, like Sharpen AI, take 10 yrs (feels like it…) to process a single image. Thx for the info.

In any case, to leap back to the top of the thread. It will be interesting to see what solutions are devised to delete or at least hide Looks that are less than of interest in Studio 2 with the option to revive them when/if desired… It sounds like a good product feature capability. That was great to raise it as something to consider from a design perspective.

I wouldn’t really consider that R7-450 GPU “beefy”; it’s actually fairly low-end. But, if we pursue this further we should probably start a new thread. 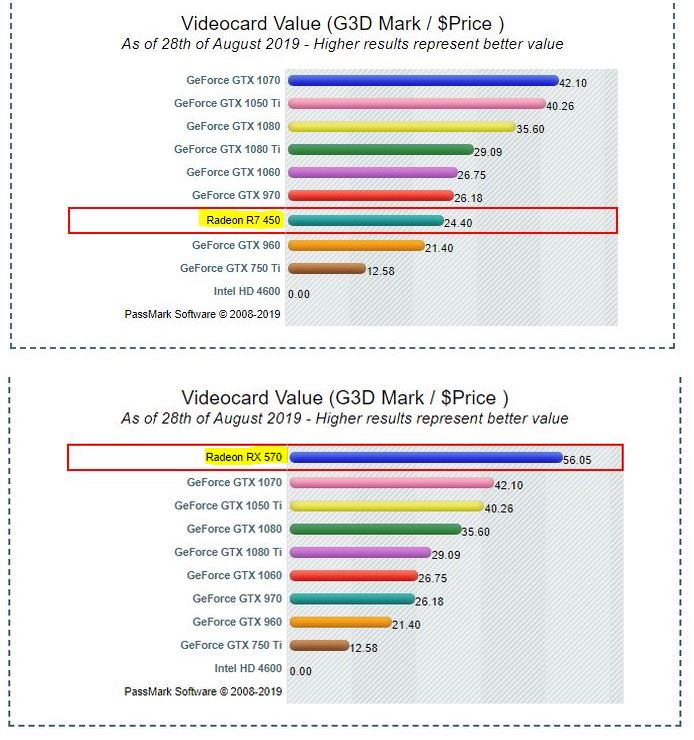 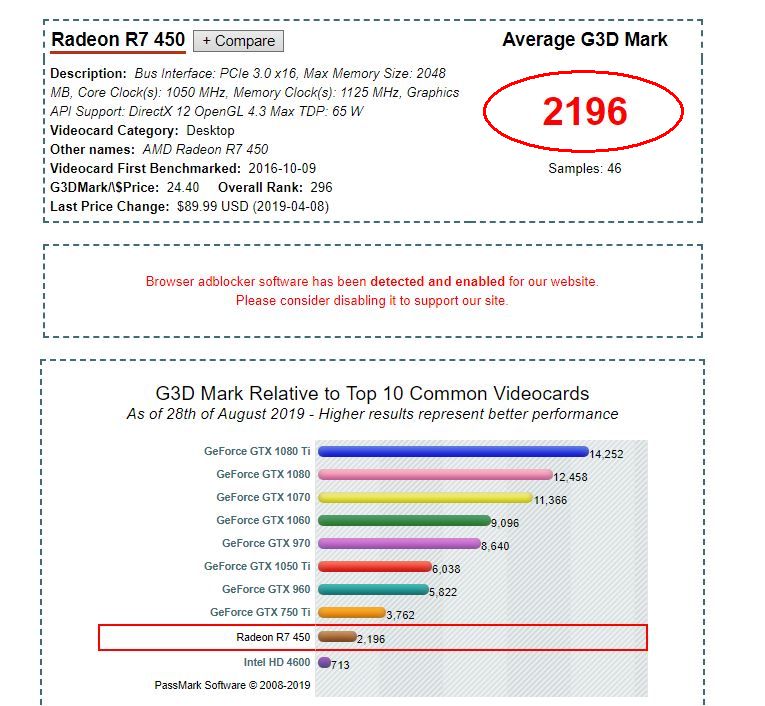 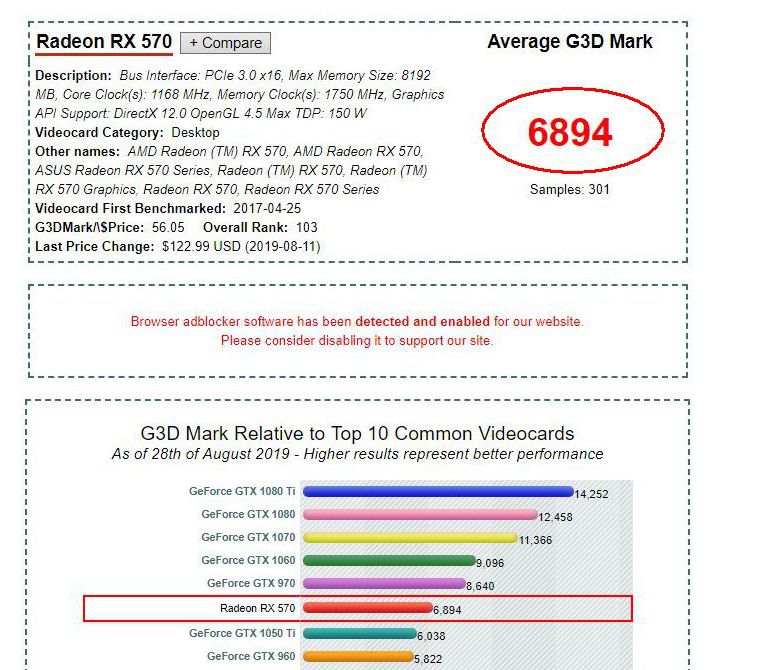 No problems on this end, so I’m not sure often is how I would characterize it, but we digress.

So the PC I spec’d/got was ordered in Dec. 2018 @JGR. The AMD processor I got was “beefier” (I think that’s what I said, not “beefy”) than the basic configuration option offered at the time. It fell into more of the “intermediate” tier of options. Since I wasn’t doing heavy math computational supercomputing and just processing photos and creating PPTs to give talks on various subjects. Plus, do writing using Word.

Product development for image processing - at minimum what I’ve observed at Topaz - has morphed into the more trendy direction of ‘AI’ and high intensity compute-demanding processor power (just for image processing…) than what was the norm over 6 mos. ago. I think that was my point. Also, that it seems perhaps ahead of the curve (vs. just trendy) to require so much AI that sometimes seems heavier on the “A” than the “I”. But things change. Not always for the better. But that’s how it goes… It’s sorta like in the telecom industry one must hawk “cloud” (or even more esoteric, “the cloud”) to seem trendy.

The AMD processor I got was “beefier” (I think that’s what I said, not “beefy”)

Perhaps, but as it stands today, for these Topaz apps, a $90 R7-450 GPU card is not going to really “cut the mustard” so to speak. That’s my point. The specs I posted were deployed a mere 6 months after yours and they have 3X more processing power. So, it may be time for you to consider a new GPU card to make these apps more enjoyable.

So, it may be time for you to consider a new GPU card to make these apps more enjoyable

Download this video benchmark and we can compare numbers:

I’ll check later - plus I started a thread on GPUs under Gnl Discussion so as not to take the original poster’s discussion too far off track… I tried to boomerang back to it in a previous post. But made the leap now in a different way.

As I said in an earlier post, I was using Studio 1 with the minimum system requirements with no computer freezing problems. What I’d find very useful is Topaz supplying a list of extremely GPU intensive Looks like Broken Bits along with which folders they’re located in so people like me can just remove them without having to go through a tedious trial and error process. At the moment it will be

This will take days which I’d rather spend on editing my photos.