Colours desaturate and bleed in Denoise A1

As the attached examples show, Denoise causes colours to bleed (often more noticeable with reds but also greens bleed) and the colours desaturate somewhat. I have now used Denoise on numerous images and the problem arises more often than not. However if I use NIK Define 2 neither of these problems arise. Desaturation and colour bleed does not happen with Sharpen A1.
These stages are executed in Photoshop, so I can see which action has caused the problem. I have to go back a layer or two and start again using NIK. 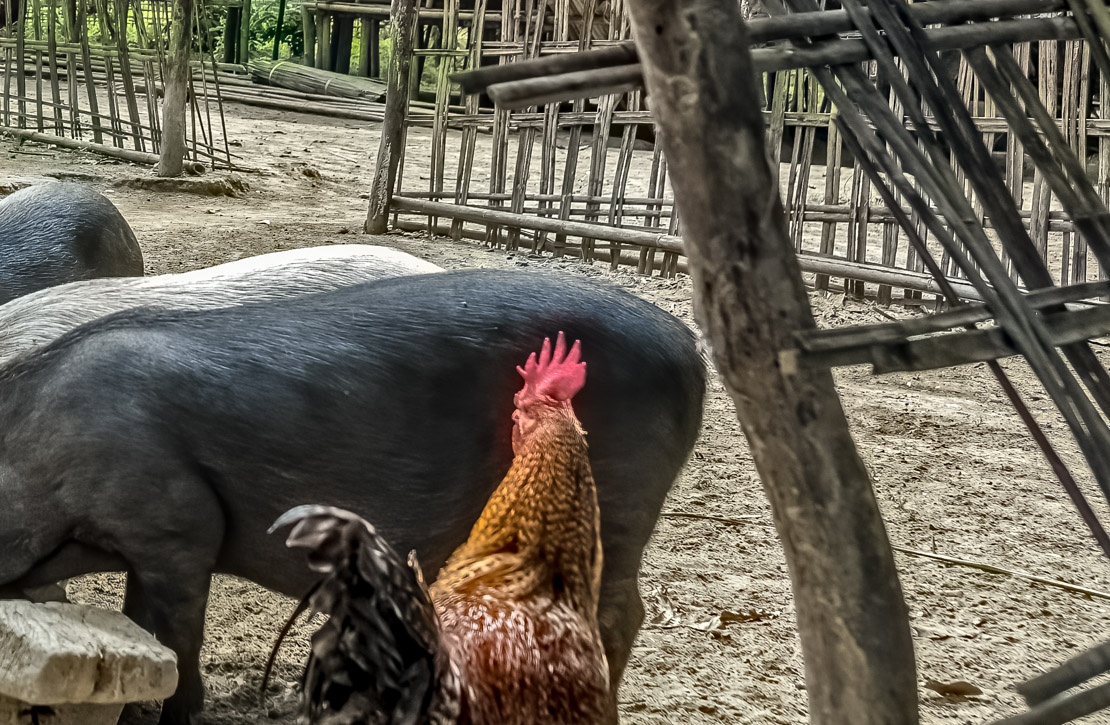 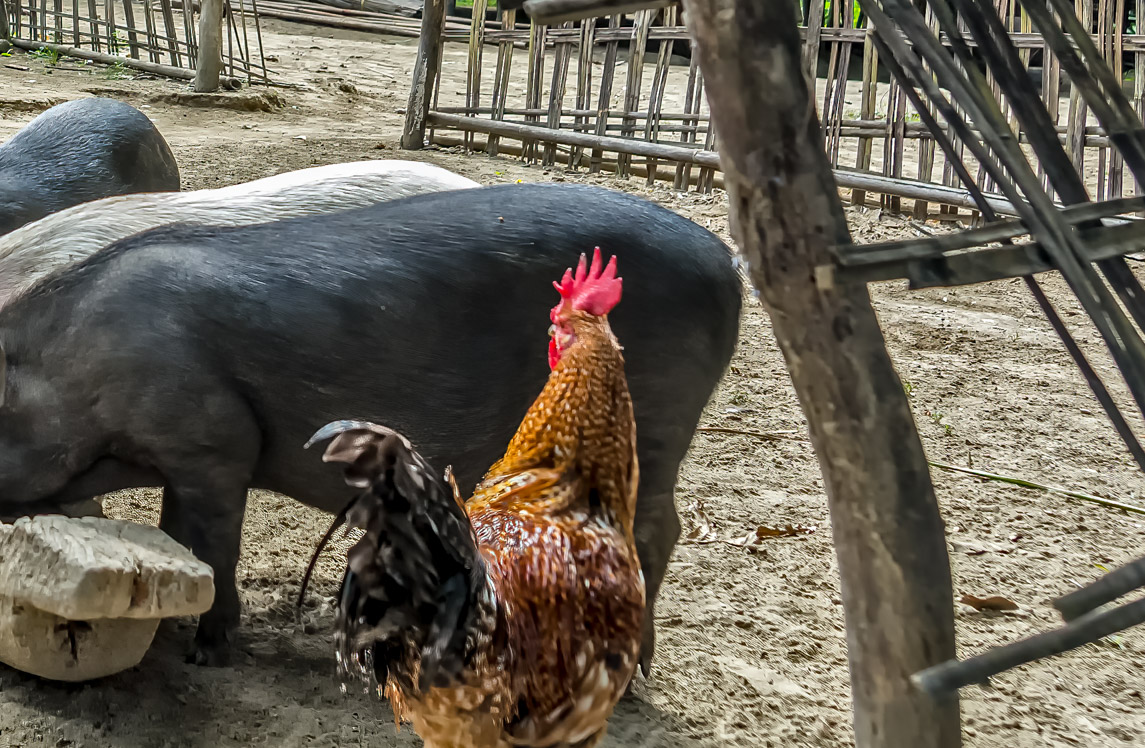 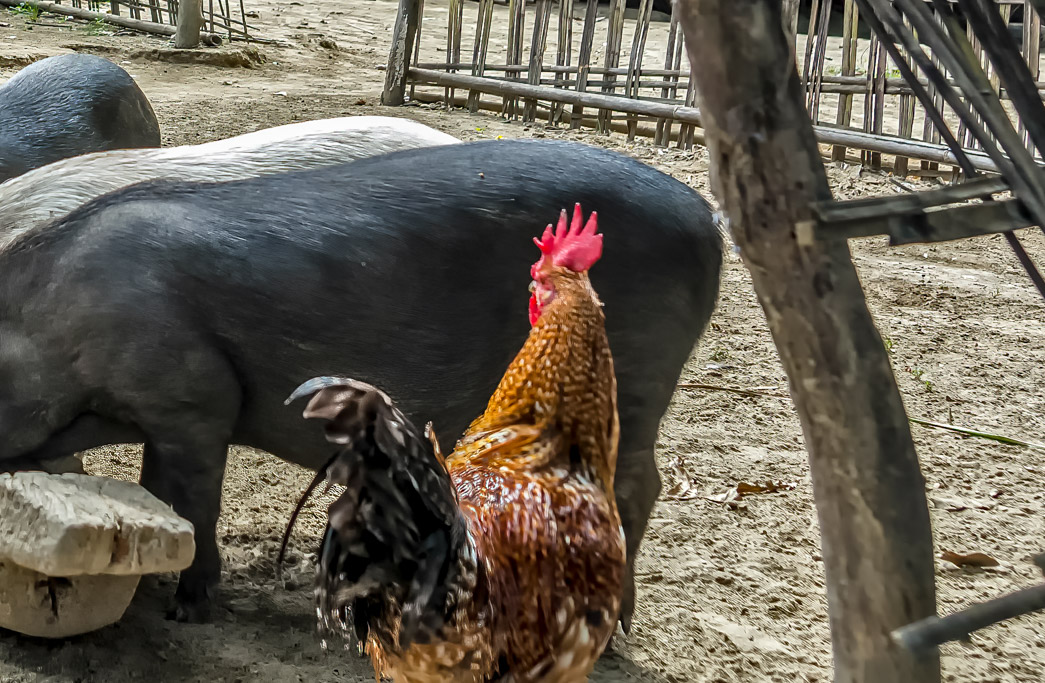 The bleeding is not so obvious so here is a closeup. 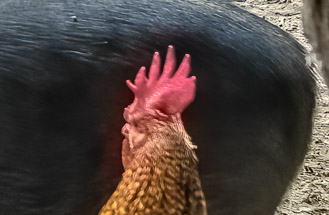 Since posting I have processed another image and the same problem of bleeding occurs - hopefully visible in these 2 comparisons. 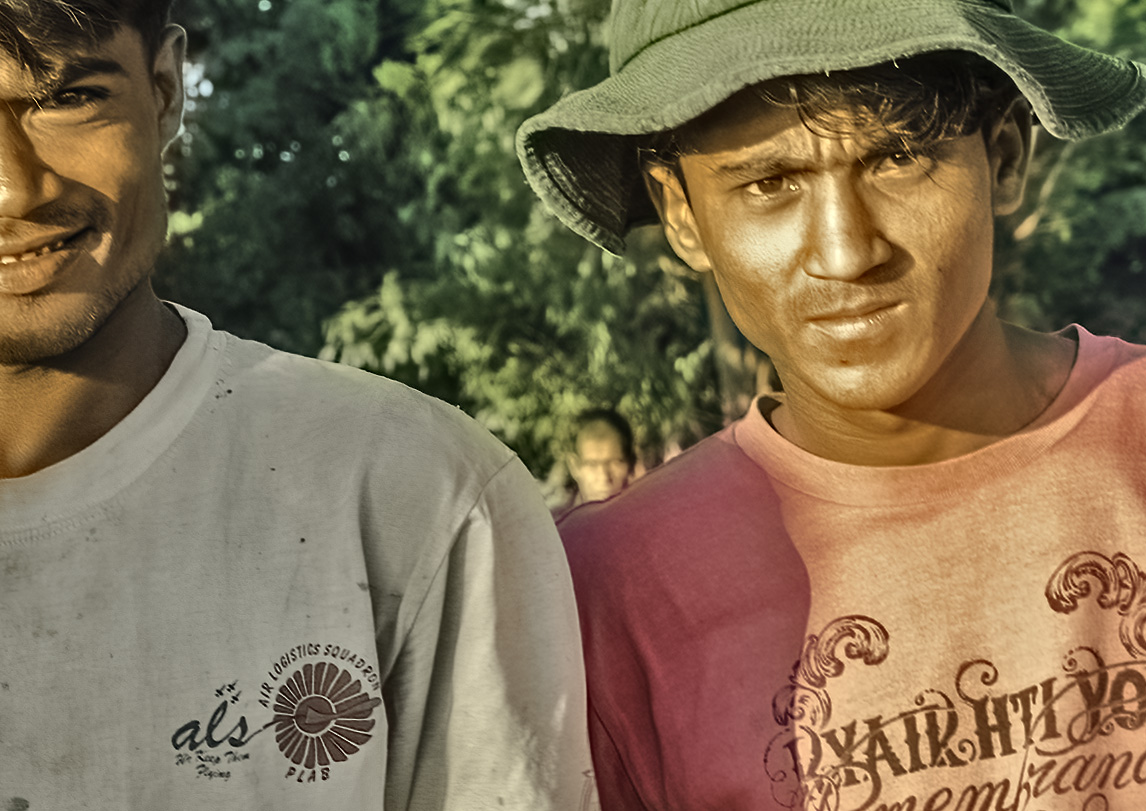 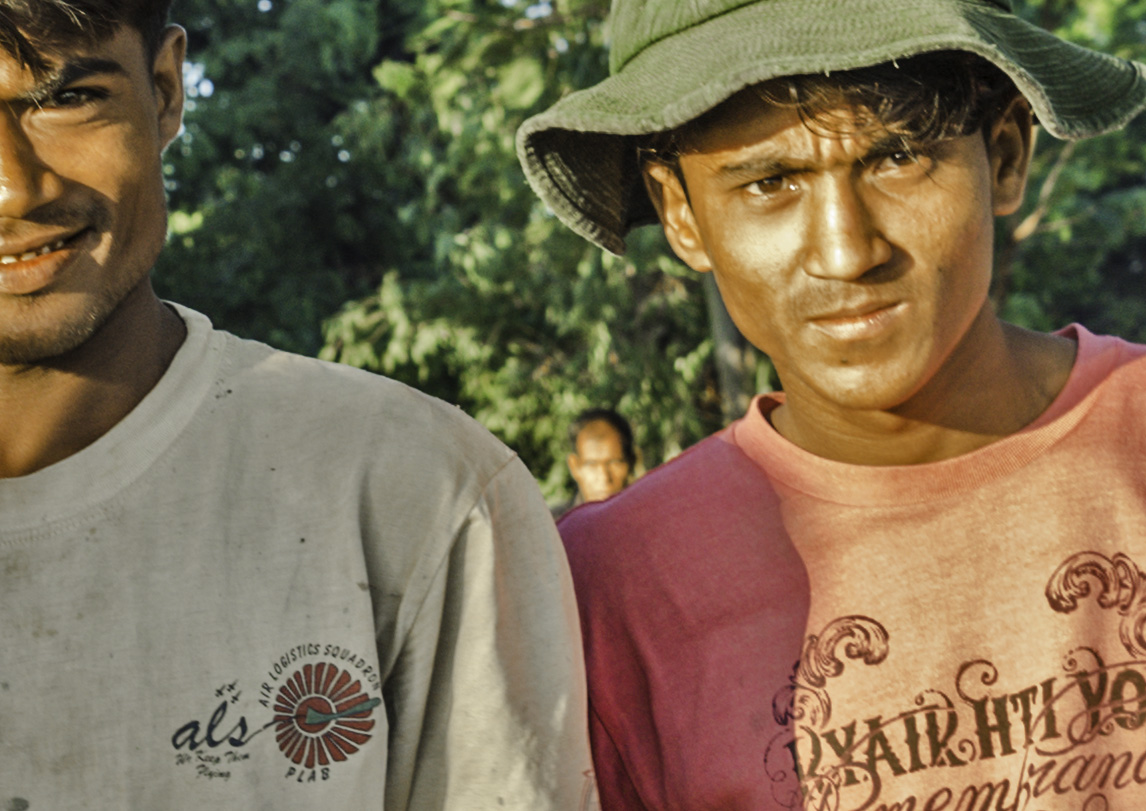 This second example is much better. I can also see that the face color on the right bleeds into the green background. There is also some desaturation as you mentioned.

Thanks Artisan-West - here’s another eg - this time from an original jpg (which I never usually shoot in) - this is a small section. Arguably the colour bleed is even worse and desaturation also. As a result Denoise as is is virtually useless.

I’ve looked at several images with Denoise AI on my computer and I have’t seen any desaturation or color bleed. I’m looking at the previews so do you see this in the preview as well as in the final save? Also, I’m starting with jpeg files and Windows 10 PC.

Hi - all my images are raw - I have a few which are just jpgs. I do not see any desaturation or colour bleed in the denoise preview window. It is apparent after saving. After thinking about this - I realised that when using denoise, I very often had the colour noise slider set at about 0.48. So I have revisited the odd image and reduced this to 0. Ha ha - there is no desaturation at all or colour bleed.

However I would have thought that if the cour noise slider is used it should not result in imperfections.

Well, good info and a possible work around for now.

The color bleed and desaturation seem to be a side effect of every color-noise reduction filter I’ve ever used — there’s a trade-off between reducing noise and retaining color accuracy. The green/purple fringe reduction in Camera Raw can do the same thing. Apparently Denoise AI hasn’t solved it either.

It’s as if the only way to remove the color noise pixels is to blur the color information across the whole image. Maybe the AI will learn the difference between individual noise pixels and wide areas of color someday.

I tested a noisy picture that has a number of colors in it. I don’t see any color desaturation in the processed pictures. As can be seen in the settings, the color noise reduction is set to 0.26 in bot AI Clear and Denoise AI modes. Windows 10, Denoise v 2.2.7 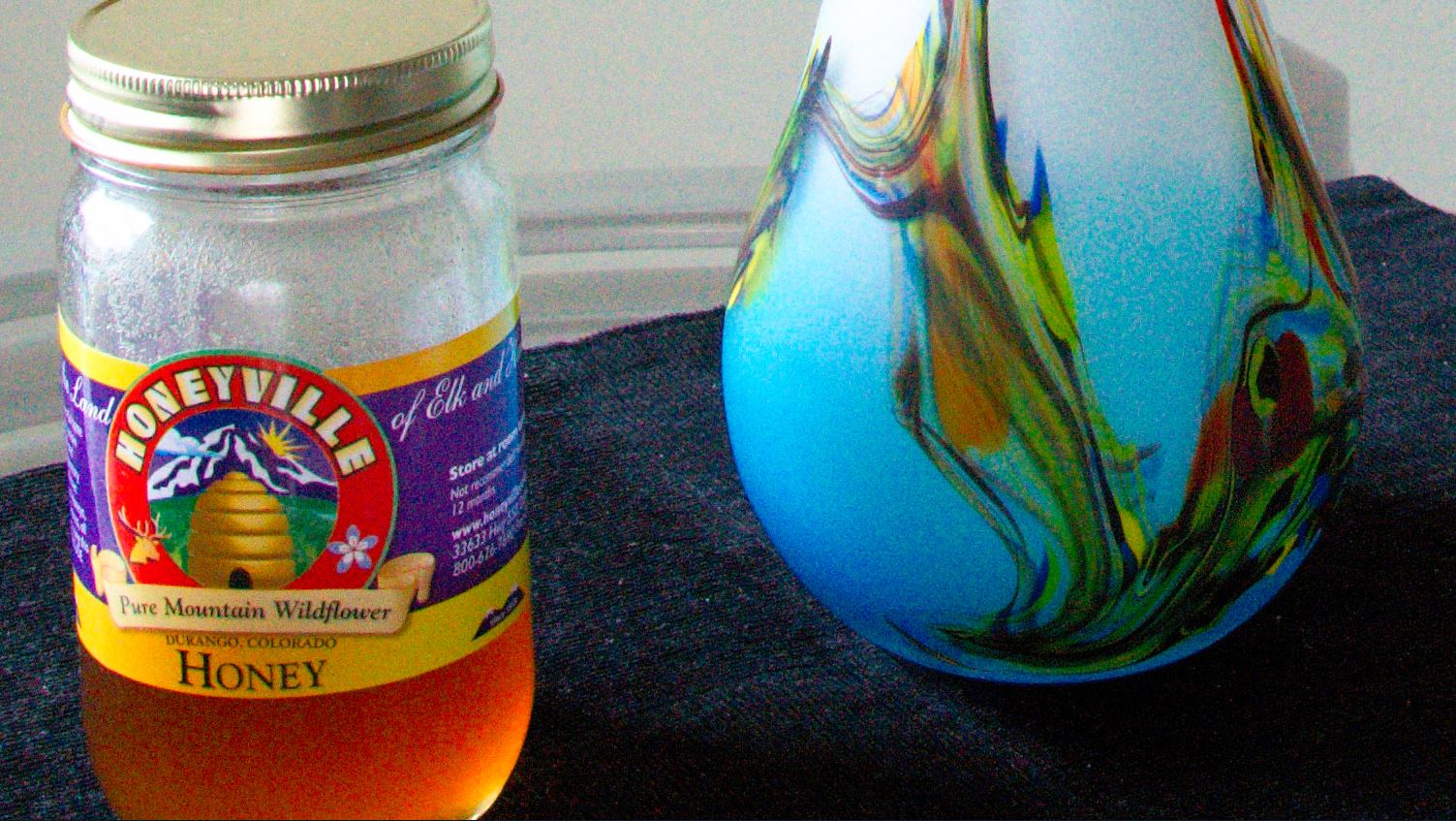 The writing on the glass looks much better with AI Clear.
Denoise AI still has very great difficulties with this, as you can see in comparison with the “Pure Mountain Wildflower”.

At those settings, both AI Clear and Denoise AI manage to kill almost all of the color noise on their own — so you’re not working the color noise reduction that hard. The wall and the glass jar in particular are pretty clean without it.

(Denoise at Auto is another matter. Color NR at 0.26 doesn’t do as thorough a job — but to be fair, it’s not doing a great job on the luminance noise either. You have to kill most of the chroma noise to get decent luminance NR.)

I hit reply too soon. Continued below…

@tirea-633139 and @randall.blank The post was about chroma noise using Denoise AI. I showed that it did a excellent job of removing that without fading the colors. Perhaps the colors will fade a bit when setting the slider high, I just set it to do a good job. Looking at the original, there is plenty of noise in the picture of both types.

I agree that AI Clear removed more of the jpeg artifacts but that is a different issue. This series of pictures show that Denoise AI does an excellent job at removing noise. If you don’t like it use something else but I think you are just trolling.

@Artisan-West Now hang on, I said I wasn’t finished yet. I humbly apologize for making the boneheaded mistake of hitting Return instead of Shift-Return, but I’m hoping this post will make up for it. And for that deleted post above, which was another mistake. And for replying to myself. The list goes on and on…

I do have to stop for a moment and say that I try very hard not to troll anyone, over anything at all, no matter how trivial, because I believe you should speak in good faith or just not speak at all. I wouldn’t do it to someone face to face, and doing it to someone on the internet doesn’t magically make it OK. You had no way of knowing any of that, so I can’t hold it against you for expecting the worst. But now you know.

So back on topic. My argument here is that the real difference can be seen in the honey jar label, comparing the effects of Color NR to having Color NR turned off. (I found that comparing it with the noisy original didn’t bring the issues out as clearly, because there are too many uncontrolled variables. And, well, too much noise.)

Here’s my comparison. I used AI Clear because I find it more effective overall for this particular image, but the effects of the Color NR slider look pretty much the same to me with either AI model. I can make the same comparison using Denoise AI if you think it adds to the discussion. 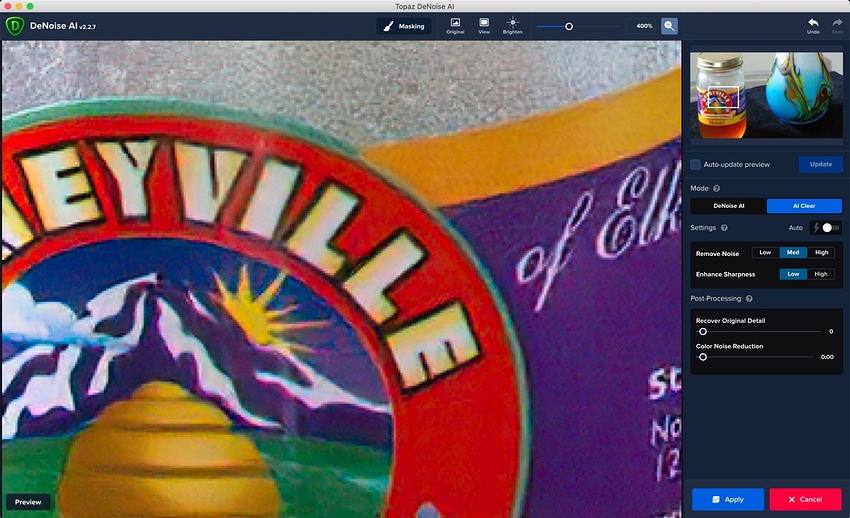 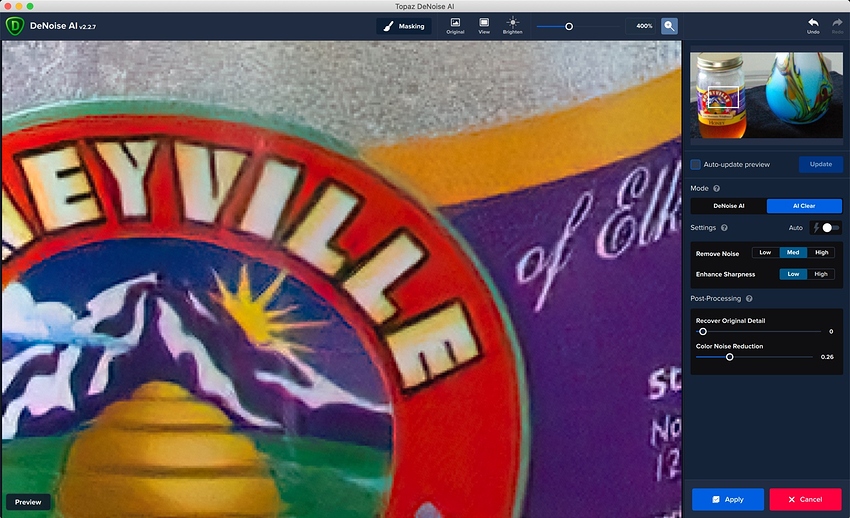 It’s most obvious around “Honeyville.” This really cries out for an animated GIF, but if you can open them in an image viewer that lets you flip back and forth, the difference will jump out at you immediately.

I’ve enlarged it (probably way too much) to make it easier to see, but you don’t have to be a pixel peeper — although I’ll confess that I am — to see that the red gets darker in general because the black outlines are bleeding into it. And I suspect the desaturation is just a consequence of the bleeding.

For the sake of fairness, I’ll point out that the color NR does remove a lot of noise in the purple parts of the label that AI Clear did not.

Which comes back to what I said originally: traditional color noise reduction has always been a trade-off between noise and overall color accuracy for me. I’ve had to make that choice in Photoshop, Lightroom, Noiseware (that’s going back a few years), Noiseless, and here as well. I generally leave it turned off. And with this image, I think AI Clear on its own does an amazing job of it without smearing the details. I didn’t expect it to work that well on massive amounts of chroma noise.

So my point is this: it’s the Color Noise Reduction slider that causes colors to bleed, not the AI algorithms. I think it’s the same kind of chroma noise filtering you get in other software, mainly for the benefit of people who are already used to it and like the look. And I’m not saying that’s a bad thing. I’ve used it myself for effect, but I’d argue that the AI models have a much more natural look to them.

I suspect you are right about the color noise algo being a fairly standard one and not AI. There is some reduction of saturation near edges where red meets white but I see this as a reasonable (not perfect) trade off. I have circled areas in the picture below where red noise or fringing was reduced but this picture is without the color noise reduction.
The reason I said you were trolling was the complaints seem very trivial compared to the total picture and excellent noise reduction of Denoise AI. I have not found any program that can outperform it though perfection is an elusive goal.

I appreciate your thoughtful reply. 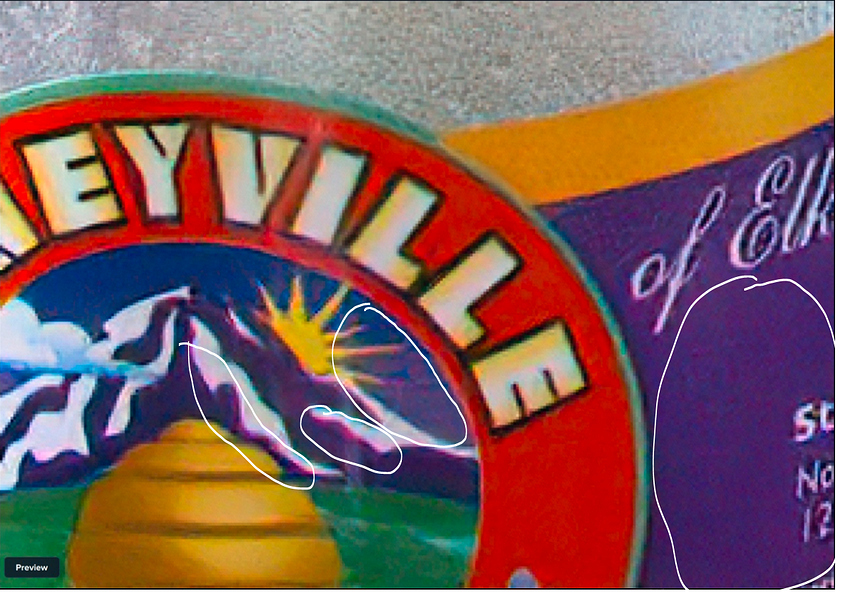 Yes, I’m extremely impressed with what it can do, along with Gigapixel and Sharpen AI. (I haven’t tried Mask AI yet but hope to get around to it sometime. Been a while since I’ve had a need for a complex mask.)

I agree with those above that blame Color Noise reduction for the bleed problem. I was having that too & found today that turning CNR down to zero unless absolutely required solved the problem most of the time. I wish I had found & read this full post a month or so ago, it would have saved me untold grief! I thought it was a Topaz update problem but am glad to know it’s not, Denoise is SO great!