I have been using Topaz Studio as a plugin for PhotoLine and the interface works perfectly. However I edited a photo today, first in PhotoLine to correct some basic issues, then in Topaz Studio to give the image some touch-ups and what I saw really surprised me.

Here is the image in Topaz Studio after some basic and color adjustments. 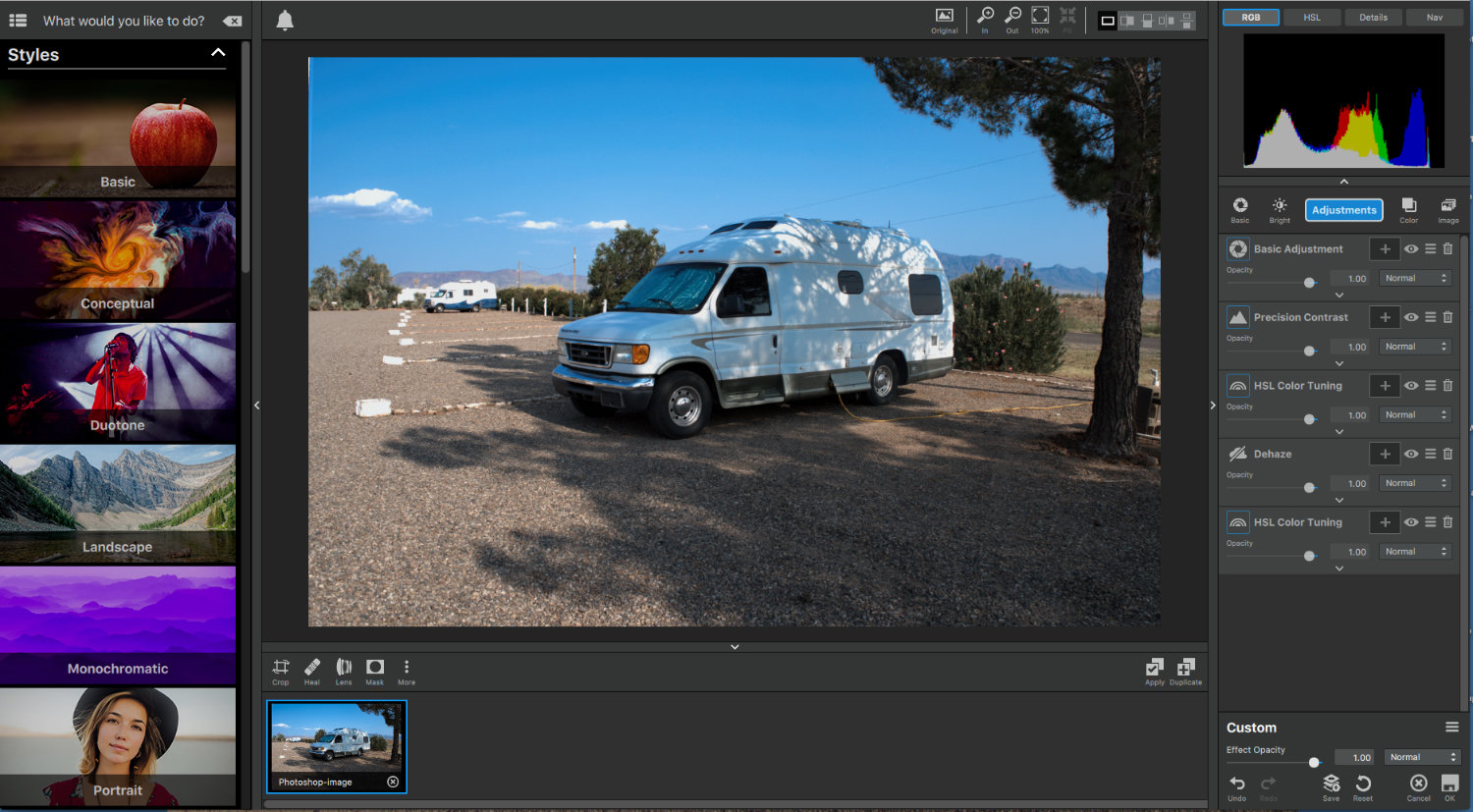 and here is the photo when returned to PhotoLine 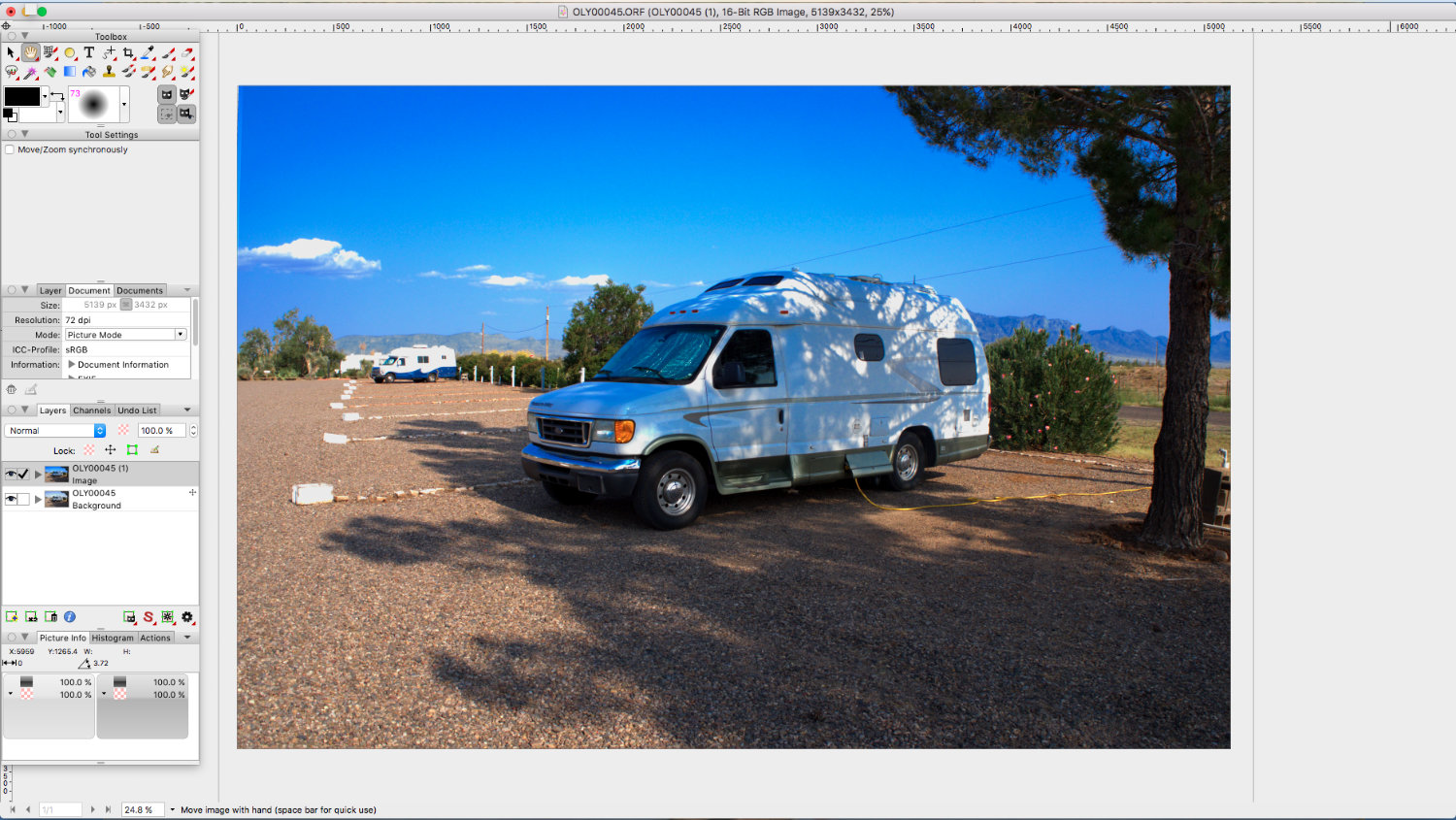 Clearly there is an issue with the color saturation after the return from PhtooStudio. What is this issue?

Try changing the color profile of the image to ProPhotoRGB in PhotoLine and see if that makes a difference.

Also I would run it as an external program and not a plugin because it is a unsupported host.

That did work. I went back, changed the color space and re-did the round trip to Topaz Studio and the changed image came back looking right. Thank you.

The charm (at least for me) of PhotoLine is that it seems to run all of the Photoshop compatible plugins properly. I have tried plugins whose developers say work only in Photoshop and they have all worked without issue when called from PhotoLine, as does Topaz Studio. In fact, when I was trying to use photoFXLab (largely unsuccessfully) from Affinity Photo, it worked properly when called from PhotoLine as did all of the Topaz plugins, including (if I recall properly) ReMask, which never worked properly when called from Affinity Photo.

The issue with Affinity is because of the different implementations of Alpha channels. Mostly because it is a modern application and isn’t restricted by a previous code base so applying adjustments and masking is extremly powerful.

You also have to remember that nothing will process plugins as well as Photoshop because PS actually ‘infers’ things from the parameters. It is always better to use an external editor rather than have issues with plugins.

ACDSee also seems to be able to replicate the plugin processing quite well.

I used to be a Photoshop customer but when they went entirely to CC I decided to look for a different editor. It was not the cost of $10/month that bothered me as I spent more than that on upgrades, but the idea that if I decided to stop paying I would have nothing left to use.

I have been an Affinity Photo beta tester for a very long time, well before they issued the first MAS release, and am perfectly comfortable with it. However they are not able to run most plugins due, they tell us, to the Apple Store restrictions, so I have looked for ways to run the Topaz plugins and now Topaz Studio. Unfortunately Affinity Photo does not run external programs or all of this would be moot, so I am stuck with the plugins. I used to think that photoFXLab would solve my problems but it, too, proved to be less than robust when run from Affinity Photo.

That leaves me (and my Mac) with PhotoLine. It does run external programs as well as plugins, but plugins just seem to be a more natural way to call Topaz functionality. As for ACDSee, the last time I looked (which was some time ago) they did not have a full editor for the Mac, only for Windows. I will look again.

I have downloaded and installed the new ACDSee solution for the Mac,but it is a simple workflow tool with no layers support and no way to call either plugins or external apps, so it is useless for me when it comes to Topaz Studio.

I have downloaded and installed the new ACDSee solution for the Mac,but it is a simple workflow tool with no layers support and no way to call either plugins or external apps, so it is useless for me when it comes to Topaz Studio.

Yes it seems to be that Mac users are now limited in the product availability, as i use RAW I mostly use Capture One Pro and then either Studio or Affinity as external programs from there. But then this is on a Windows platform.

My normal processing is similar. I have been using both CaptureOne and Dxo Optics Pro on the Mac, and Affinity Photo as an external editor for both of them. That worked well until the release of Studio.

I can call Studio from either of those workflow tools but if I wish to use Affinity Photo and then Studio as an extension of AP (rather than in sequence) I can not. Hence my look at PhotoLine.