Ok, I am a subscriber to Adobe, paying $14/month for LR and PS. I also have purchased Topaz Clarity and Black & White and enjoy using both. For some strange reason my GPU is supposed to be supported in LR but is not and I have to toggle GPU acceleration off, so the processing is less than optimal (FYI it’s a Nvidia Gforce GTX 960 4gb). It’s put me off from continuing using LR for photo editing, I could save some money by ditching Adobe and using other excellent free software such as RawTherapee.

One of the things that has me stuck with Adobe however is the Topaz Plugins, and this morning I was notified by email of the Topaz ‘Detail’ for sale, however I noticed for the first time this mentioning of ‘Studio’.
I find the whole Topaz forums and website a real mess tbh, it is not clear at all what or how to go about implementing any Topaz packages, indeed I recall finding contradictory information months ago when trying to get Clarity and B&W to work in LR…
So I’m having to write a post here hoping someone can help shed some light on what my current options are and whether I am barking up the right or wrong tree;

I find the whole Topaz forums and website a real mess tbh, it is not clear at all what or how to go about implementing any Topaz packages, indeed I recall finding contradictory information months ago when trying to get Clarity and B&W to work in LR…
So I’m having to write a post here hoping someone can help shed some light on what my current options are and whether I am barking up the right or wrong tree;

Am i gathering that Topaz now has a Studio of it’s own, something separate from LR?
Can I use Clarity and B&W in this ‘new’ Studio? (as well I take it ‘Detail’ should I choose to purchase it)?

Firstly you have always been able to use Topaz Plugins from LR with Fusion Express as the application to invoke them.

The best option is to download and try Studio … it has free and paid adjustments and the Studio product itself is free to use and also has RAW conversions.

NOTE: It isn’t a replacement for LR as it doesn’t have a cataloging system.

Thanks for the swift reply, much appreciated.

My current understanding is this;

My issue is that because LR is badly optimised for my machine, I think it is also less than optimal when using the Topaz plugins (for example brush strokes are still laggy like in LR). It is odd when considering the specifications of my machine easily play high end games at over 100fps but cannot handle LR, but this of course is Adobe issue not Topaz.

I’m simply looking at this time if there is a workaround to using the Topaz products I have bought and paid for (and may continue to purchase more) without using LR at all, just a simple editor. I’m trying to ascertain if the Topaz Studio is something that can launch separate from firing up LR (and therefore may actually result in a more fluid and responsive experience for me) or whether it is kinda like a posh and better version of FusionExpress (and therefore allowing a quick toggle between the Plugins such as Clarity, B&W and Simplify (because currently if I wish to use both or all products on an image I have to choose which plugin to use first, make adjustments, hit ok, be pushed back to LR with the tiff file and then repeat the process a second or third time ZZzz loading times…).

This is all about it:

Download it , install it and all your plugins will appear in the plugin menu and Studio can be called as an external editor from LR.

BTW: Most gaming machines are optimized for Games and, in many cases, specific games. Overclocked CPU’s & GPU’s are not optimal for graphics applications and some of the best graphics PC’s for image and video manipulation are not really good for gaming.

Thanks for that, will try it out.
I was under the impression that alone a handful of plugins are currently supported by the Studio, and such ones like the B&W are not? You seem to think Clarity, Simplify and Black&White are supported? It kinda appeared to me that perhaps only (for now) that Clarity, Detail and Impression were only supported in Studio.

Good to hear it can be used separately (ie external editor)

And yes, I made the mistake thinking that a machine capable of gaming with a semi ok GPU (at the time) would be up to the task of powering LR properly. Indeed it should be, I have had several Adobe employees remote control my machine to troubleshoot, they are at a loss as to why the performance is worse with GPU on than off, especially when my GPU card is on their list of cards deemed fit. Some worked on the issue for hours…

Studio, if you look at the description, is a fully featured stand-alone editor (including RAW conversions) that calls Topaz Labs plugins (ALL) as say PS would.

If you own Clarity, Detail or Impressions the latest updates are now Studio only as the plugins will no longer be updated as separate programs but Adjustments within Studio.

Cool, I only own Clarity, B&W and Simplify currently, but it sounds like what yer saying is that if I want to stay up to date with those plugins, using them with Studio is the way to go.

Downloaded and installed Studio now, it’s just finished, gonna give it a whirl

Ok, so I have downloaded Studio and logged into my Topaz Account and fired it up, two things;

The upgrade to clarity came as a specialty in Studio an as you are a previous owner part of the free upgrades for life upgrades to Studio.

As for the other plugins they may or may not be upgraded but if they are they will be part of Studio,

Ar you using your NVIDIA GPU because your PC will have a integrated one as well. You can assign it in the NVIDIA control panel or right-click on the Studio Icon and run with the high-performance NVIDIA processor?

I’ve tried before (and once again now) with Nvidia control panel, adding the specific programs of LR and Topaz Studio to the program list and specifying what to use (basically turning everything on), this of course in case the programs running somehow miss the Global Settings of Nvidia.

I then try launching LR toggling the GPU on, restart and try a brush, nope… far laggier and worse than ticking off.

I’m also running CAM (a CPU GPU monitor program) and I can see on my screen, that right now just typing this message to you I’m at 41 degrees celsius GPU and 0% load, using either LR or Topaz and I get a peak of 10-14% typically when enabling the above. If I don’t enable then the load is pretty much 0-3% (proof that the card is not being utilized at all.
It’s like the programs are still not using the GPU properly at all.
Compare this with a gaming session where the GPU runs at 80-90 degrees and 80-90% load, I know when its being used.
I understand that in a software like photoediting the load might not be very consistent, but using brush strokes across the screen (such as increasing exposure highly), the load doesn’t tend to go above 14% and the lag is unreal, a good 1-2 seconds before catching up to where I have been.
Toggling (in LR) the gpu off, and of course im using the mb gfx and I’m getting lag but its workable lag (half a second delay). My expectations is using a GPU should be vastly improved, basically realtime brush stroke adjustments.

I think I’ll have to contact Nvidia about this, the issue seems to lie with them, some applications using the GPU effectively and some not at all…

Do you also have the latest drivers installed as on the NVIDIA website?

Yes always, from gaming updates its always wise to have them updated. I’ve had this card over a year now, and its never played ball with photo editing software.
LR, when choosing to use GPU acceleration, if the card isn’t supported its supposed to spit an error or something saying so, i’ve never had that issue.

I’m actually live chatting with Nvidia now, will see what they say.

I’m pretty skeptical, seeing as a fresh install of Win10 and this GPU coincided together initially as well, and even then it didn’t work…

The NVIDIA drivers from the Windows update are old, the latest from NVIDIA is 385.69 and you MUST keep these updated from the NVIDIA website.

I assembled my own “gaming” PC some time ago, and I remember that I had the option of selecting the GPU which was built into my Intel CPU (not very powerful), or my NVIDIA GTX-580 external graphics card. This was about 7 years ago, so my memory is rather vague, but I think the selection was performed via BIOS. I’m just wondering whether this may be an issue in your computer’s setup. It should also mean that there would be two seperate video output plugs on the back of your computer… Not sure what the story is if you are using an AMD CPU.

Although the above is probably not the solution to your problem, it’s the only thing I could think of that might be causing such issues, and I assume you are using the latest drivers for your graphics card - try a clean install of the drivers (custom installation option) and see if that clears the blockage.

I think the selection was performed via BIOS

Not it isn’t, select via the NVIDIA control panel.

Not it isn’t, select via the NVIDIA control panel.

The only thing that I can see in my NVIDIA control panel that may be remotely relevant is an option for delegating PhysX processing to the CPU or the graphics card. I’m no expert on this, but to the best of my knowledge, PhysX is a function relating to video games, not image processing software. An exchange I found on the Adobe forums seems to bear this out, so unless there are different options in your Control Panel, I don’t think it applies to what I was referring to in my original post.

The only thing that I can see in my NVIDIA control panel that may be remotely relevant is an option for delegating PhysX processing to the CPU or the graphics card. 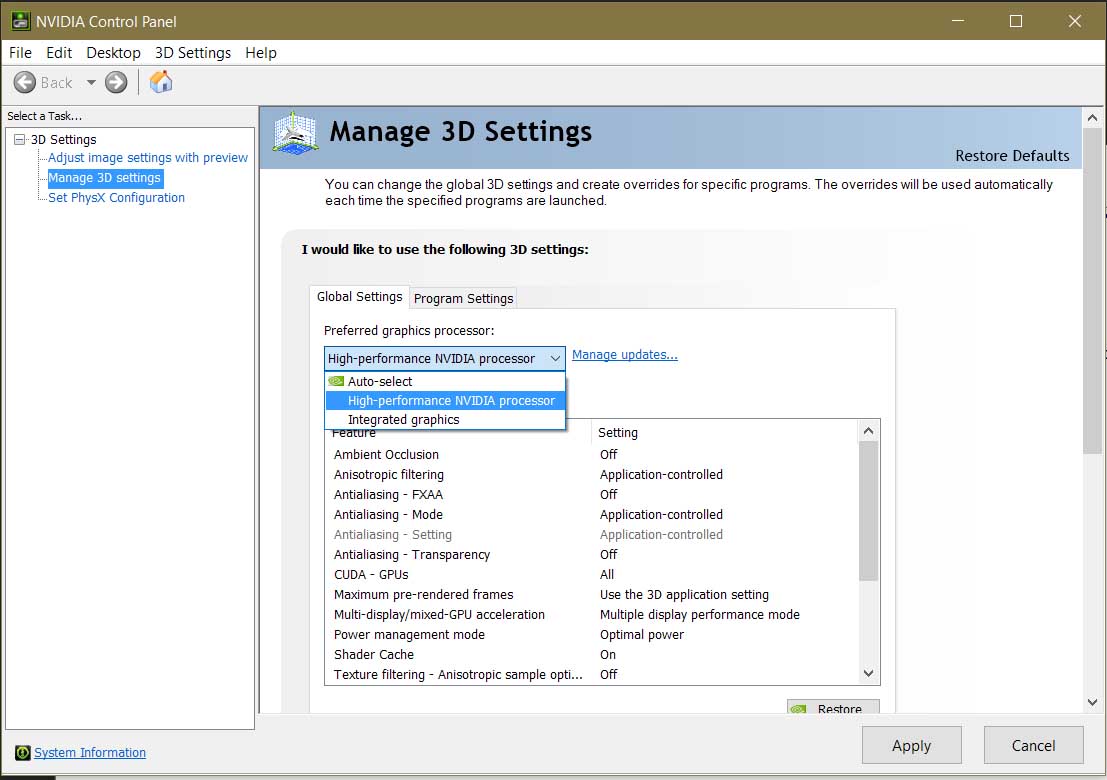 and … if you want to select at the time …

Hey peeps, sorry been busy the last few days. Just getting round to reading all of this updated info.

Ok, so first I can confirm, updating display adapters in Win 10 is not sufficient, you do need to visit Nvidia and update from there. I can confirm I am on the latest driver version 385.69. I did a custom install involving a clean of previous driver installations.

I really think this is the crux of my issue;
https://petapixel.com/2015/05/08/why-your-lightroom-cc-may-actually-be-slower-with-the-new-gpu-acceleration/
Whilst my RAM and GPU are fairly ‘new’ my Core i5 is certainly ancient now, and is most likely the culprit. Odd however that PS is fine and LR not.