When using Topaz Sharpen AI 3.3.5 with RAW files either Canon or Sony and saving in original format (DNG) it loses orientation, maxing out Magenta in White Balance and worst of all creates some unrecoverable color shift.
Interesting part that this converted DNG reads just fine in Lightroom with the same color and orientation as original.
Surprisingly Topaz Denoise does not have that issue, thought that they use the same RAW conversion library.
Although they both lose lens correction profile.
Before/After sharpening 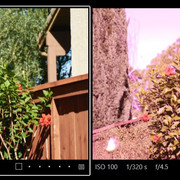 Updated to v4.0.0, the issue is still there, cannot use Sharpen AI with DNG files in Capture One 22 due to pink cast.

I am also experiencing this. CR3 files from a Canon R5. For me, it is not always a pink shift though. One image I just tried was a green shift. Interestingly, when I view the preview of the outputted DNG in Finder (I am using a Mac), the colors look normal. When it gets imported and viewed in Capture One 22, it has a color cast. Very confused. It’s like Topaz is baking in a color profile and then a profile is also getting applied again when viewing in Capture One. I can’t seem to fully correct it using a global white balance adjustment. Sharpen AI works so well but it’s basically unusable. Very frustrating.

Similarly with C1 22 and Gigapixel AI. Topaz ignores the Preferences setting for appending a file suffix and simply overwrites the DNG file, maxes magenta, and wipes out edits—across all variants. I love the Gigapixel results, but this is intolerable. You cannot let your software destroy creative work. To be clear, ‘Edit’ works fine for me so long as I work in a TIFF file [though GAI still fails to append a file suffix]. And in that case, there are no massive color balance shifts. But ‘Open’ and DNG is a disastrous combination.

I experience the same issue using Olympus images, but when i import (base import function) in C1 the DNG file that was generated by the topaz application during the edit, the color is properly handled. I suspect an issue with the way C1 re-import the photo within the edit with an external application workflow when using DNG files and using a topaz lab app. I have notified Capture One some months ago.