I just attempted to install Topaz Studio on my Mac for the very first time. Unfortunately, it will not launch. My system details are below.

If I attempt to manually launch ‘Topaz Studio.app’ from the Applications/Topaz Studio folder nothing at all happens.

The Topaz Studio sub-menu and its associated entries were successfully populated into my Photoshop CC 2019 Filters menu. If I open a .jpg image in PS and chose Filter > Topaz Studio > Topaz Studio. I get the usual small “You are using Topaz…” window then nothing further happens. I will also get the warning about working on the background layer if appropriate but nothing further will happen beyond that.

After experiencing these problems, I deleted the following three items, emptied the trash, and rebooted the system.

I re-ran the Topaz Studio installer but nothing at all changed. Studio simply does not run with no visual indication as to why. I even watched Activity Monitor while attempting to use Studio and no items named “Topaz…” or “Studio…” ever appeared in the process list. Additionally, I looked at /Applications/Topaz Studio/InstallationLog.txt and found no instances of ‘error’ or ‘Error’.

Does anybody have suggestions on things I could try or look into before opening a support request?

NOTE: I’m posting this additional information just for anyone that’s geeky enough to follow along.

I made some additional attempts to launch studio just so I could note the time and look for any corresponding messages in the system log. Indeed there were some to be found by searching the log for “Topaz”. A search for “studio” resulted in the same messages.

When I attempt to launch Studio as a plugin, there are three messages logged. All three messages state that an object class is implemented in two different libraries both of which are included within Studio’s app bundle.

There are four messages logged when I attempt to launch Studio outside of Photoshop.
Qty=3 of the same messages about object classes in two different libraries
QTY=1 message from launchd stating “Service exited with abnormal code: 255”

That last message is particularly interesting as it is:
com.apple.xpc.launchd[1] (com.topazlabs.topazgigapixel.25584[1901]): Service exited with abnormal code: 255

I do not have A.I.GigaPixel installed nor have I ever even downloaded anything to do with the product. Investigating further, I looked at the contents of [StudioAppBundlePath]/Contents/Info.plist and found these lines:

I definitely do not have the knowledge to tell if this might be the cause of my issue. I actually kind of doubt it. It is, however, certainly something that Topaz should fix if only for the sake of having log entries use the proper product name.

Please download and install Studio 1.13, which corrects the CFBundleIdentifier issue you’ve pointed out here. We also added a number of fixes. Give the new version a try from the downloads page:

Thank you for the suggestion Joe. I deleted the same three items I previously mentioned, power cycled my Mac, and installed v1.13. Unfortunately, the only thing that has changed for me is that the correct product name now appears in my system.log messages. Aside from that, Studio still fails to launch both stand-alone and as a plugin. I continue to get identical system.log messages to those I previously mentioned with the corrected product name being the only difference.

For reference, I do have a support incident open for this. Regrettably, your suggestion was much more on-target to my actual issue than the initial response I received via the technical support channel.

I’m having the same issue on Windows. And, yeah, the response I received from tech support was, “Here’s how you access Topaz from Photoshop.”

That wasn’t the issue at all, as I explained in my initial query.

I hate to be one of those people that airs dirty laundry on a public forum but in this case I feel it’s warranted as this matter has yet to be tended to by Topaz Labs. Here is a summary of what has transpired:

To confirm email specifics, I have checked my email spam folder every time I looked for correspondence on my support request. Additionally, I have verified that both of the email messages I have sent to technical support were sent to the address of support+id[MyRequestNumber]@topazlabs2.zendesk.com . This is the reply address from the original message I received from Topaz Labs on my support request. The wording within that message states to reply to that email for further correspondence.

I have had a similar problem for the last few releases on a Mac.

@Billdude29 & @temp, I have updated both of your requests with a request to setup a remote session, as your problem is definitely related to a macOS issue that prevents the Studio software from launching in any case.

@jessekhill-785305, I have also updated your request and invited you to a remote session, but you do not have the same issue as the OP or others in this thread. Instead, you have a Photoshop configuration problem, which is indicated by the error message that you provided (Error - launch plugin failure), and your own comment stating:

I’ve followed the steps of marking the .exe as “run as administrator,” but this hasn’t helped the issue. I still can’t open any of my Topaz plug-ins through PS. They work otherwise.

I would like to note that configuring the plugins to run the .exe “as administrator” breaks plugin mode! We explicitly caution that you turn this option off in the file Preferences. Please undo that change you’ve made before we connect for our session.

As an aside, we are a super small team, and pretty much all of November I was tasked with helping our Marketing team prepare for Black Friday, a critical sales period for the company. During that time, I was unable to maintain an adequate support response rate, leaving many of you behind. I realize you probably don’t care about my explanation, but there it is. You have to make sacrifices in a small company, to make things work, especially with limited resources, and we’re doing the best we can. Now that the sale is over, and we have a new member of the team that joined right after the sale ended, I’ve moved back into support and will be focusing on answering as many requests and solving as many problems as possible in as short a period of time as possible. We apologize for the delays, and we’re working as quickly as possible to talk to everyone that’s been waiting.

Thanks for your reply. I don’t understand, however. The Topaz “help” article on the “plugin launch failure” error code says the solution is to run as administrator:

If you are receiving "Error: plug-in launch failure" on your computer, please try the following steps: Windows 7: Make sure Windows 7 is updated to the latest Service Pack from Micros... 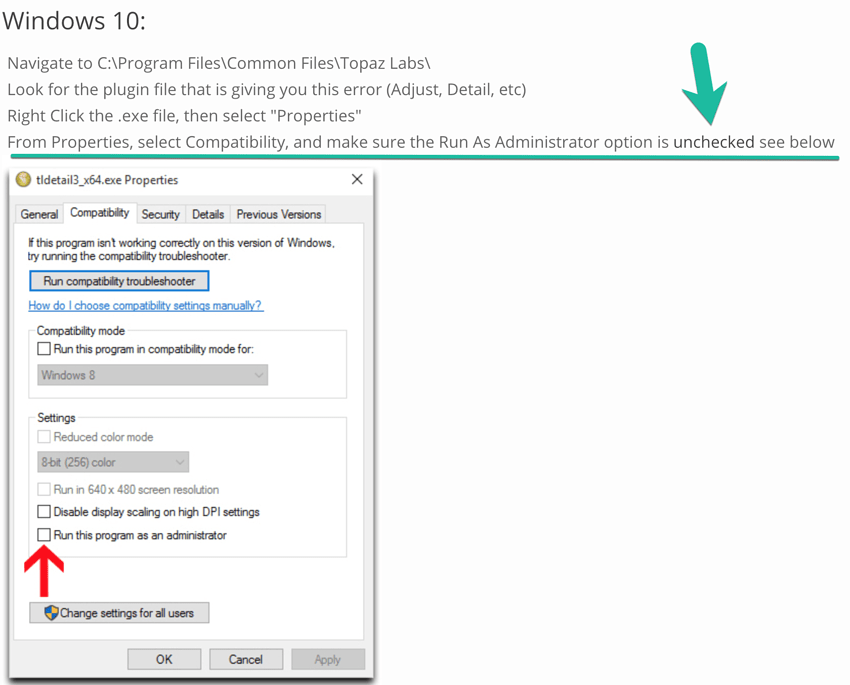