Hello everybody. Based on your previous experience with Video Enhance AI 2.4, what would be the best setting to use for upconverting old interlaced 480i29.97 video to full HD 1080. I have these talking head interviews I filmed 20 years ago with my old Sony VX2000. Here are some screen grabs of the subjects: 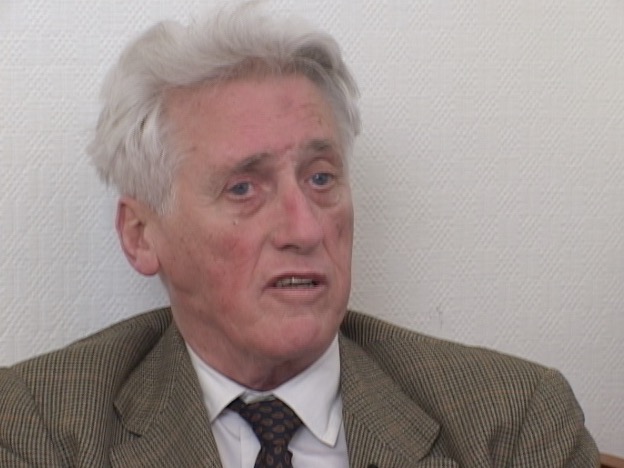 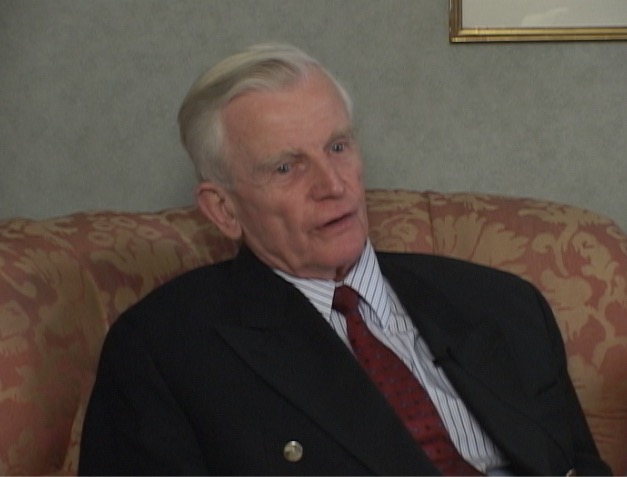 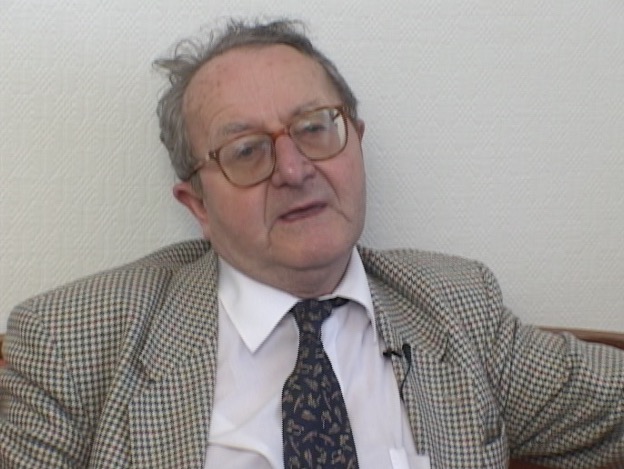 Thank you in advance for your help / feedback.

Hi Viktorz3008 and thanks for your help. Unfortunately Dione TV results in playback at 50% speed and frame rate being doubled from 29.97 to 59.94. Same issue encountered with Dione DV. But not Dion DT.

What input format are you using? MP4 MKV MOV something like that?

The source file is a Quicktime Apple ProRes 422 with “.mov” extension.

I usually convert any other formats to mp4 before upscaling to avoid framerate issues. Maybe you will want to try that out.

Thanks again for your help viktorz3008. I’ll definitely try that. I’m getting excellent results with Proteus 6. I haven’t heard anyone mention Proteus. I’m hearing a lot about Dion and Artemis, but not so much about Proteus. Strange because I’m getting the best results so far with it. But I’m a total newbie with this software, so i very much appreciate your help.

No worries. I personally hate Dione models the most due to artifacts. But at least it’s sharper than any deinterlacer I know so far. Proteus is what I really like and want it to be better. Proteus is the future of VEAI I’m sure about it.

I’m not sure this should be happening, the frame rate should double, but playback should still be 100%

Technically, doubling of the frame rate is correct as the second field should be shown half a frame after the first field.

Personally, I’ve had the best success by doing it in two passes;

Hi Mark, thanks for your help as well. I don’t understand why Dione DV and Dione TV are doing that. But i read that Video Enhance AI recommends de-interlacing footage prior to bringing it into its program.

I don’t see an option for that in the Video Enhance AI user interface. Or am I missing something?

No, I should have been clearer, It’s two separate runs with VEAI.

Regarding de-interlacing; that’s what Dione DV or Dione TV are doing in step 1; changing the 29.97fps Interlaced video to a 59.94fps progressive video.

Then in step 2 you load the new file produced and upscale it with whatever model works best.

I notice in another post, you had a question about inverse telecine.

For this I use Handbrake.

While it has detelecine options, these don’t always work so instead, I turn all filters off and set the output FPS to 23.976, somehow it figures out which frames to remove and works 99% of the time. This function would be done before step 1 above.

I didn’t mention this before as it doesn’t apply to footage you shot yourself.

Thanks very much Mark. In Handbrake, to remove “telecine”, should the settings be this? 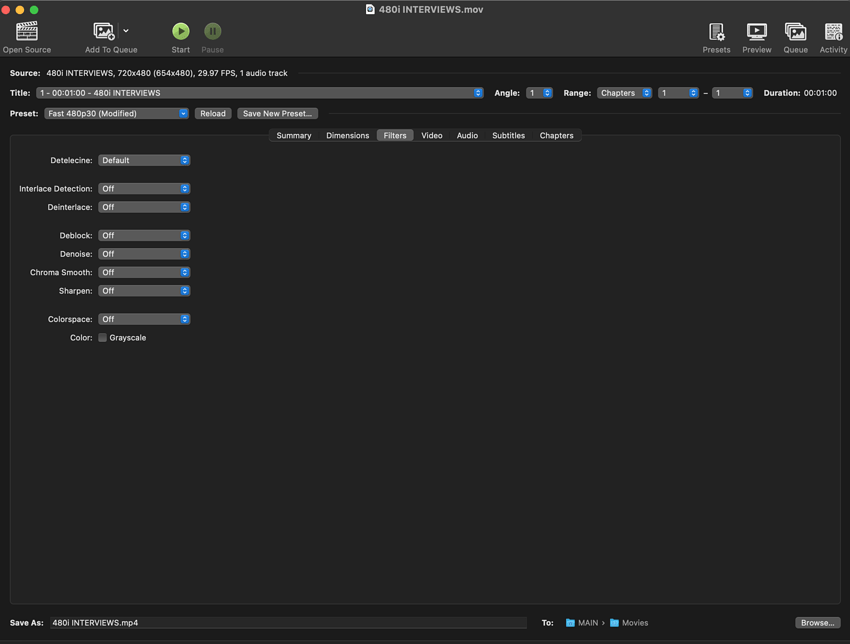 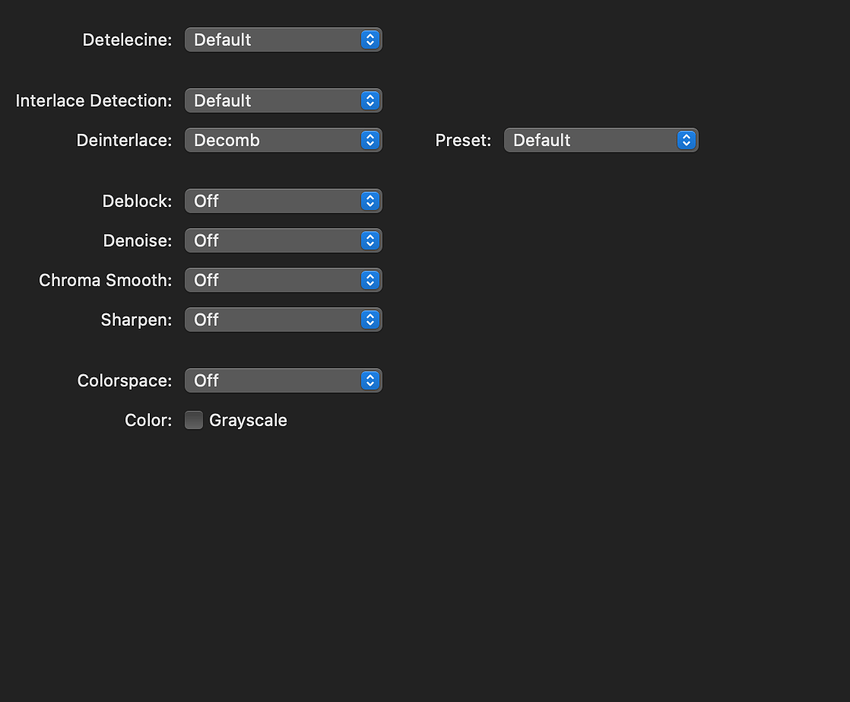 Not the second one as it is using deinterlace, you want to use VEAI for that job.

You can try with the first one to see if it works, I have not had much success with this. I normally set everything to off and then set the output frame rate to 23.976

I would suggest trying both on a small clip and comparing the results, what works for me might not be what’s best for you.

Hi Mark, thanks very much for your continued help with this.

I’d be happy to share the file I’m testing: 3 quick cuts of interviews (in French and German) totaling 60 seconds. But it doesn’t look like I can upload it here on this forum.

I only have the watermark trial version of VEAI. I wanted to see how good VEAI is at upconverting and also how long it would take on my 2014 iMac to upconvert 1 minute of SD video to full HD. I first tried on my old 2012 iMac (with a 2GB GPU) and was getting a very sluggish 2 seconds per frame which seemed to be taking forever (60 minutes to encode only 1 minute). But then I tried on my newer 2014 iMac (with a 4GB GPU) and it seemed to be at least 4x faster (0.4 seconds per frame). It actually upconverted the same 60 second clip in just 8 minutes!

I’m really tempted to buy right now, but I discovered that last Black Friday 2020, Topaz Labs was offering its entire set of programs for the same price as VEAI alone ($299). I’m dying to to get to work with it right now, but that Black Friday offer makes it very tempting to wait.