Anything for the shot right?

A few years ago we had a strong, rare winter swell roll in out of the west. So I took my camera down to Magic’s. The beach, which was closed, is to the left of this image. After surveying the situation I decided to get a shot looking into the curl of the swell as it was beginning to break. There is a hotel between where this shot was taken and the waves rolling into the beach. I stood in the hotel’s parking lot for about 10 minutes watching the waves break on a rock outcropping directly in front of me. I figured to get the shot I wanted, I had to crawl over a rock wall, out on to the outcropping. After great debate with myself, it seemed relatively safe so I crawled over the wall out onto the wet lava ledge, set up my tripod and clicked off a few frames. While doing so, I was well aware of the sound of the waves crashing all around me. It just did not feel right. So I gathered up my tripod and crawled back over the wall into the parking lot. As I did so, a HUGE wave crashed onto the rocks were I had just been standing and flowed up and over the rock wall into the parking lot. And I’m thinking “Holy #$%#!” I will never ever do something like that again! But I got the shot and lived to tell about it. 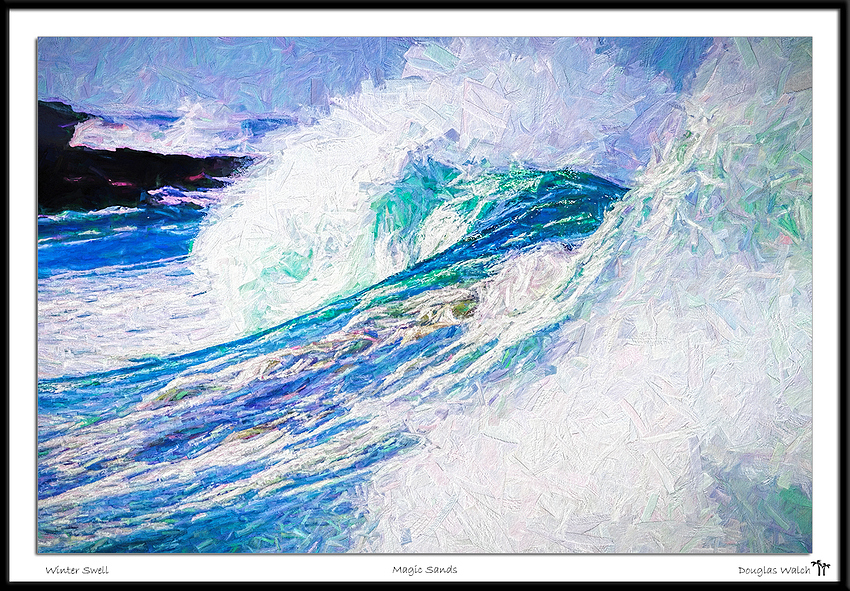