Hi
I have had problems with AI Gigapixels. I have the minimum requirements.
I just looked at the requirements for this program and now it has a warning about using with NVIDIA GEFORCE.
( Unsupported Graphics Cards - Intel NVIDIA AMD )

Looking at new computer, what graphics cards are supported,

4Gb VRAM is the basic minimum - but 8Gb VRAM is much better!

Unless you are making very large pictures, 4GB will do. I have 4GB on my GPU and have never had an issue and it should not affect speed. I use and recommend a Radeon RX580 as the best bang for the dollar but if you have the money get the Nvidia GTX 1660 Ti.

Now as all of “our” computers will vary but the AIG specs do talk of Min, Recommeded and Optimal

Now the RAM falls at “recommended” and the GTX 1050Ti 4GB is based on the chipset (1050Ti) falls between Recommended & Optimal.

Therefore I can but surmise that my PC should work more than well with AIG and it does using v3.1.1

Note ~ when I upgraded the Graphics Card I saw a major increase in processing speed compared to the initial graphics card meant I was using CPU not GPU (I reported this improvement on another thread about the nVidia drivers versioning).

I have yet to update to AIG v4 mainly because I have been concerned about the almost beta level issues being raised. Possibly groundless but the one reported about much slower processing in v4 compared v3 puts me off the update for now???

Hi
Thanks for the response.
Since it states now that Nvidia Geforce is unsupported, and use CPU only with that graphic card, should I buy NVidia for the new computer (and use CPU) or look at alternates.
Such a dilemma, since NVIDIA is highly recommended for photo post treatment processing.
Thx again

Can you please clarify exactly which nVidia graphics card you have? Why, because I fear you are mis-interpreting the “requirements” page information.

Yes, many of the Intel, nVidia & AMD cards are not supported as was my original nVidia GT610 but there are GeForce cards that are absolutely fine such as my GTX1050Ti 4GB

I surmise you are viewing this page https://help.topazlabs.com/hc/en-us/articles/360012811791-Getting-Started-System-Requirements-for-Gigapixel-AI but if you scroll down to the “Graphics Cards Requirements” section and more specifically the “Desktop GPU” part you will see GeForce listed as meeting requirements.

The details are very important and I hope that has helped with your question.

Ah! if only money was no object

Thank you
I took it as not supported and that even with minimum or maximum requirements I would need to use CPU, not GPU. That notice was not there when I bought AIG. I ran it once, then it would not run. Not sure why.
But I want to have a good graphics card with a new computer, so I was seeking advice.
Thanks again
Susan

But I want to have a good graphics card with a new computer, so I was seeking advice.

Susan, I gave you good advice and you want to use a good graphics card not the CPU for the Topaz AI products. The two cards I recommended will out perform the GTX 1050 Ti. If you get a totally new computer get a Ryzen 5 2600X CPU and choose one of the two GPUs i recommended. You also should have a SSD ( a NVMe M.2 is best) for your drive. You can get the RX580 with 8GB of VRAM and since prices have dropped in the US, I would recommend the extra memory.

So in my case the best performing card I could install (without a lot of other hardware upgrades) was an Nvidia based GeForce GTX1060.

The card upgrade cut my file save processing time on AI Gpxl v3 from 3m35s to 53s so performance increased 4X.

So in my case the best performing card I could install (without a lot of other hardware upgrades) was an Nvidia based GeForce GTX1060.

You bring up a good point, if an upgrade is made a new power supply may be needed. Should be 600W or more and have the 8 pin GPU connector (usually a 6 + 2 pin). I build my own computers so its easier to select components.

Hi Sue
I just updated my PC graphics card to GTX1050Ti 4GB, much cheaper than buying a new PC. So far I am very happy with the upgrade, no issue with Topaz products

I’ve got an x570 mobo 3900x AMD cpu, RX vega 56 (both cpu and gpu are on clc/aio cooling). My cpu is hitting 70% usage but my gpu barely ramps up clocks, when using media coder and x264 I can see clocks on my gpu higher than I get in games. Is my gpu being fully utilized?

In gigapixel, go to File > Preferences > Advance Preferences. See if you are using the GPU. Mine looks like this for my RX 580 GPU. Open Vino can be set to yes or no but only affects the CPU. 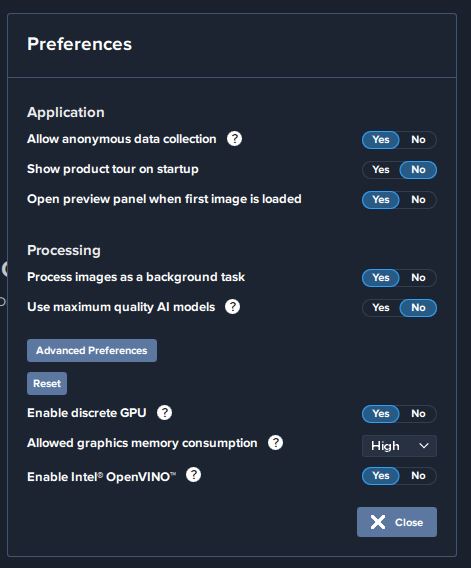 Wow my file processing speed went from 19 seconds a frame to 1 second if that. Thx man!