no it was using my radeon card too.

You might have misinterpret my comment. I am not comparing Topaz GigaPixel and HitPaw as two equal programs that compete in the same way. I was commenting on the fact that until the latest release 5.8.0, was looking like they were not making many big improvements, but were more hawkish with their pricing. Lots of bugs too. Some programs pretty much abandoned, like Mask AI, Adjust AI. JPEG2RAW AI etc. Not good signs. Meanwhile there are many more companies entering the AI race and HitPaw AI was one of them. Even now it still does a better reconstruction of blurry and small faces than Topaz, and for some users its enough what it does. Point I’m making is that when companies get complacent and stop innovating , competition catches up and surpasses them.

Not sure how much you follow camera market, but remember when Nikon and Canon were kings and than Sony showed up on the market, seemingly out of nowhere and surpass them, and than by the time Canon and Nikon joined the mirrorless game, they already lost market share. Canon managed to regain a lot of it, but Nikon not so much. There are many many examples like that. I hope Topaz does not become case study because of their complacency.

Topaz has had many updates of their AI apps over the last year; some of which changed major underlying sub-systems. I would let them worry about their business model.

It looks like HitPaw is certainly not a significant competition in the denoising arena.

On my system, the performance is terrible. On a small 400K file here are the times for the General model: 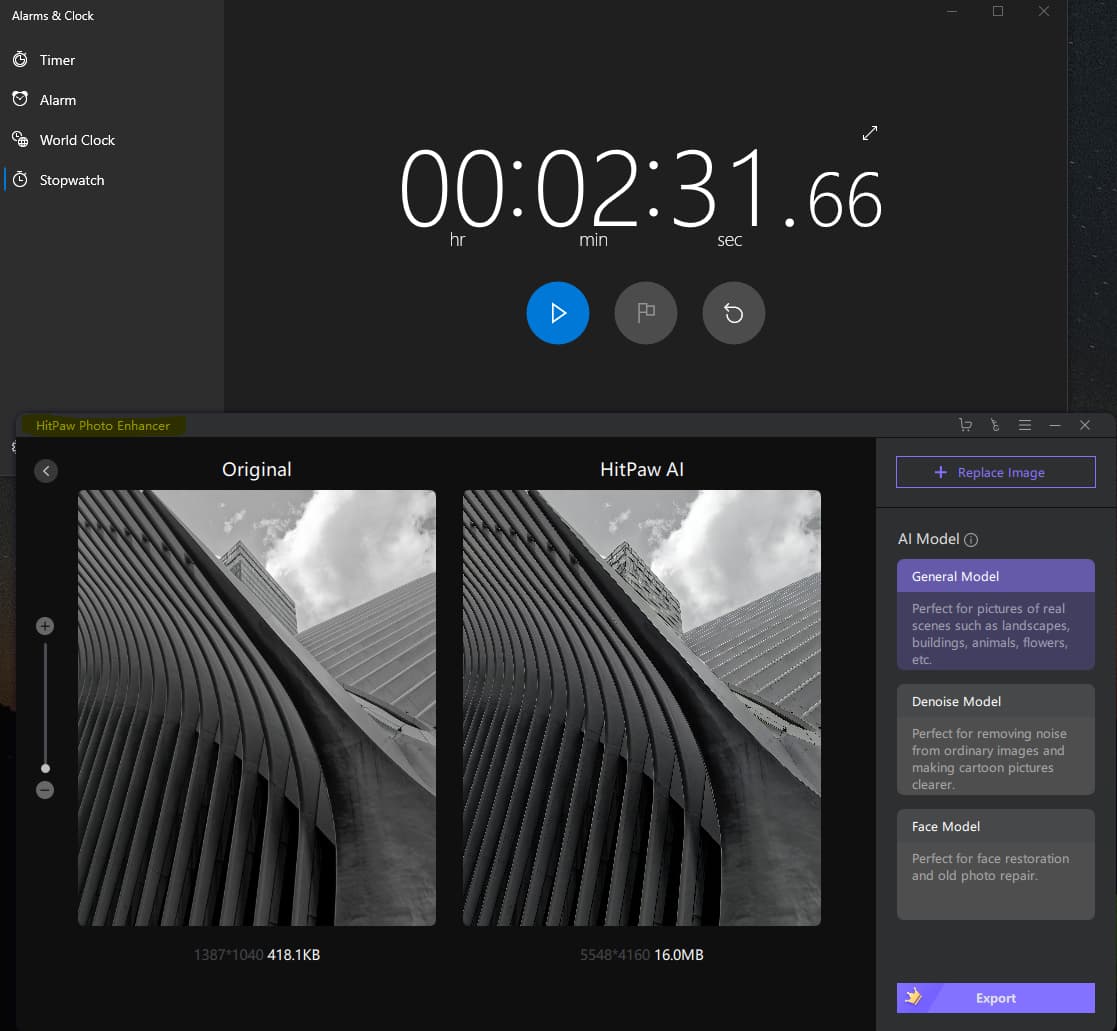 If you compare it head on, I agree Topaz is much faster and for images of certian type better. You try to reconstruct small images that are heavily compressed and reconstruct faces and the story changes in favor of HitPaw. Question is what is the job you are doing and what it is the best tool for the job.

You don’t carry 400 mm f2.8 full frame lens to shoot birthday party of your neighbors sun, do you? There are better and cheaper tools for the job, and still more appropriate.

There are simply some images and needs that HitPaw does better than Topaz. Will see how it will work in the future, but for the time being some things you just can’t get with Topaz. Here is one example. By the way in case you are wondering, I’m not going for the original only larger resolution, I in face want a reconstructed face because its used as reference for other post processing tools.

There are many examples I could show, and they simply are two different programs that work differently. I use the one that I need for the specific job. Simple as that. I do not compare them for the same job, because they have different abilities. Similar to 400mm lens vs smarphone analogy.

There seems to be some kind of tribalism in this forum where anything not named Topaz is seen as some kind of threat to the holy Topaz. I do not see it as threat. I see it as another tool on the market, that if anything Topaz should emulate and add similar ability to its set of features. 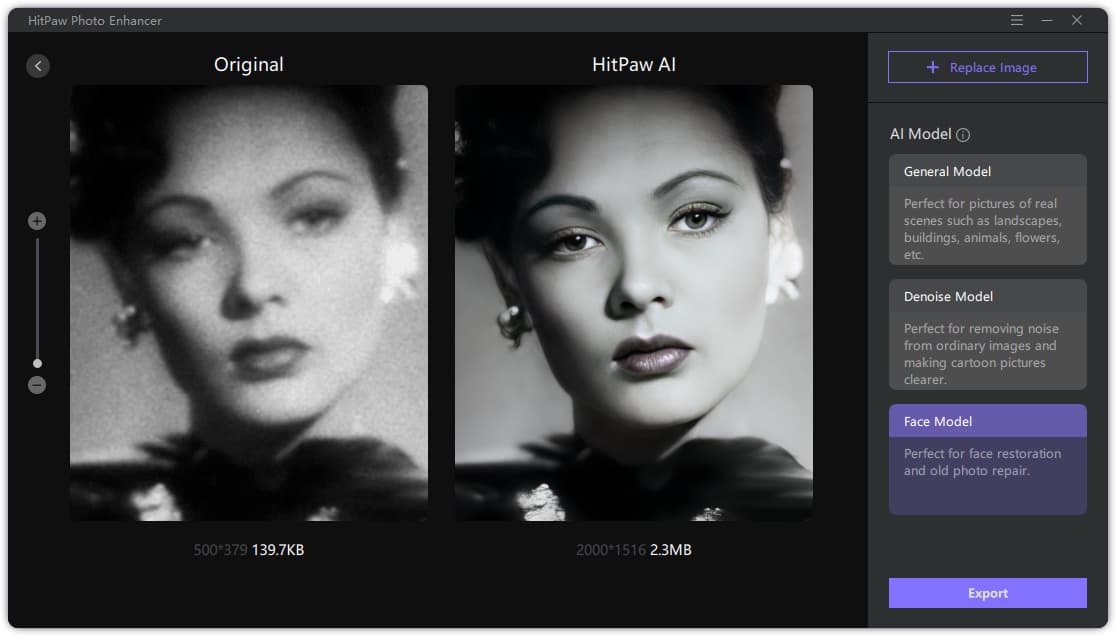 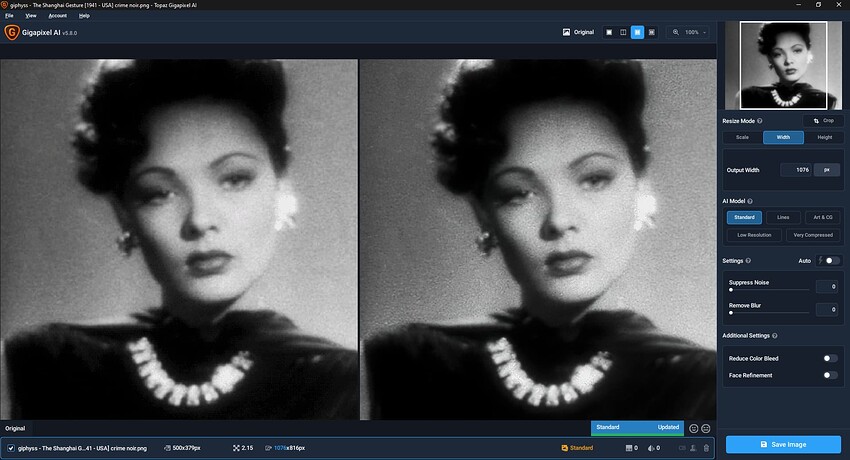 You have pointed out one use case where HitPaw works well.

I pointed out one use case where it fails miserably, imo.

The over-the-top chear leading started to sound a bit like an agenda. You never know these days.

But, yes, use whatever works best for you for the specific job you are doing.

Update: I did try a face reconstruction with a small (25K) jpeg and it worked quite well. However, anything larger than ~25K and it seems to slow down dramatically. I’m not clear why that would be the case, but it severely limits the use case for me.

I’m still trying to determine why the HitPaw app insists on running with Admin Privs, which is disconcerting from a security standpoint.

This test didn’t turn out so well. It looks over-processed. I’m not aware of an intensity adjustment.

In any event, I tried a few things to get the permissions back to User, but was unsuccessful.

So, unfortunately, I was left without much recourse but to uninstall. 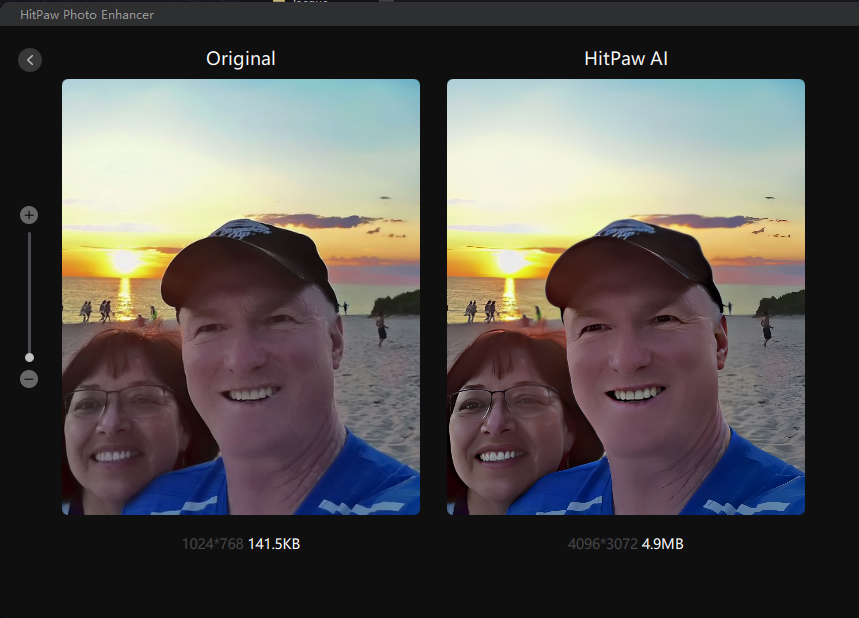 Seems to me you chose the wrong tool for the job. The image is already processed and not the best for the thing you wanted to do. You should not blame the tool. You should be more deliberate in choosing the right tool for the job. I can only upload five mages here, but I assure you these images were not possible to save with anything Gigapixels offers at this time. But HitPaw was able to salvage the images.

Furthermore, I often use more than one AI model or even tool and combine the images for best result, on the challenging examples. If Gigapixel can reconstruct jewelry or clothing better than faces than I’ll use that for everything but face and simply compositing it later in Photoshop.

Don’t blame the tools. Become better at understanding their strengths and weakness and when and where to use which tool for best results.

Speaking of tools, adding film grain to over processed smartphone faces helps bring back the illusion of texture. Its yet another tool one can use. 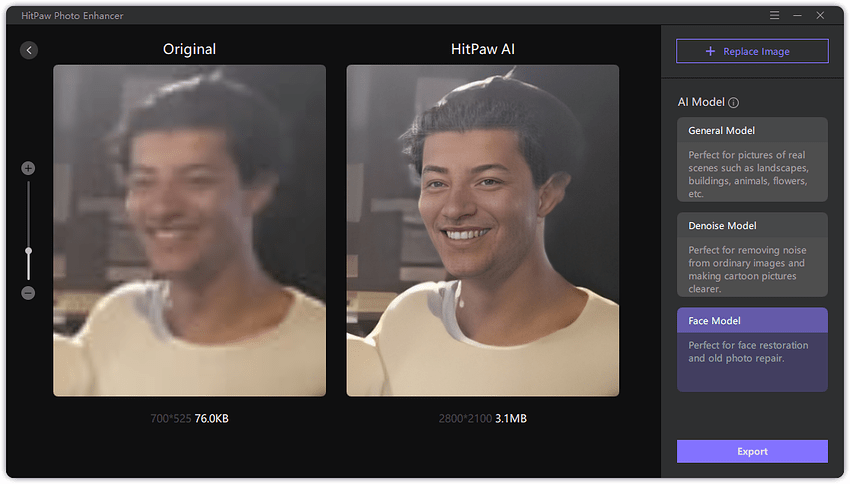 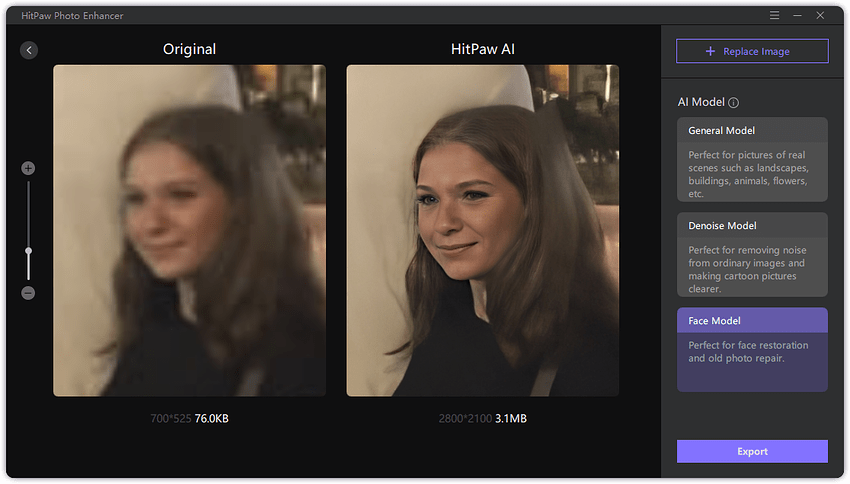 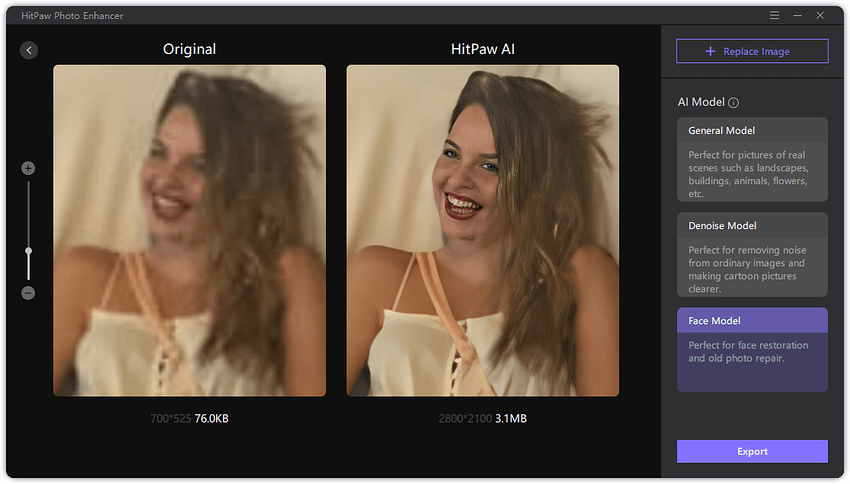 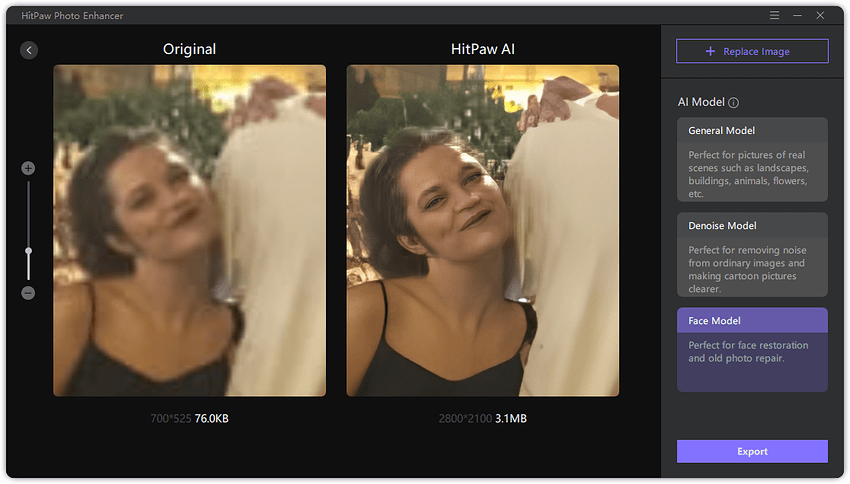 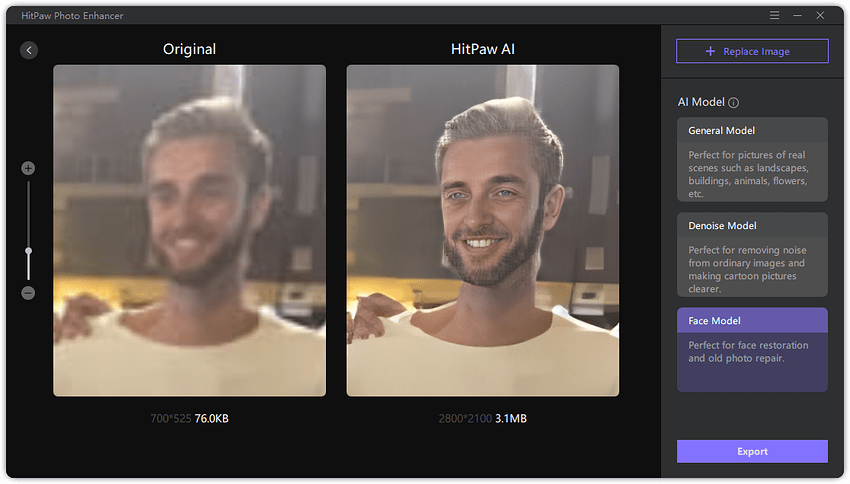 Seems to me you chose the wrong tool for the job. The image is already processed and not the best for the thing you wanted to do.

The original image in my post was 1024x768. So, what if I wanted to enlarge it? I can’t do that with adequate results?

I rarely have images as “bad” as the ones in your examples!

But, I agree. If you have images that “bad” then HitPaw does a good job at reconstructing them. I am not blaming the tool - It just doesn’t offer what is useful for me. If you have very bad images, as in your examples, it can work wonders to improve them.

Fair enough. Personally I find the tool very useful in the niche that suits it and that is how I use it. To be fair to Topaz, the last update to 5.8 was one of the biggest improvements they made from update to update. And I’ve been testing Gigapixel since initial release of 1.0. I do wish Topaz offered few features that some of the competition has, although if one company does it all, than one company has too much power and can start to abuse it, like for example Adobe did when the pushed for exclusive cloud only services etc.

Another place where HitPaw is very useful for me is line graphics, like illustrations. The latest Topaz update made big improvements in that area, but there are still examples where some of the competition better reconstructs the sharp edges. That being said, none of them is very good with enlarging small graphics like numbers and letters in images. They are still all struggling with that. I find that strange, since much like human faces, I would expect they have more than enough reference images of numbers and letters to train the models, but I’m sure that will be improved in the future.