Oh this is great to hear.

I’ve done several projects already with 2.4.1 and my clients have been extremely happy. I just need to get my render times down with I guess a little farm of Mac mini M1s.

the render are a bit more quick on the artemis (new version) and on depending of the gear used, chronos is much faster too.
i’m not on a typical gear (i use iGpu the gpu from my processor and an old one (i7-7700), so i’m in a different league than everybody else, but it’s what has been reported so far.

Don’t trust the GPU usage in Task Manager because it is very unreliable.
You may want to use other software to check GPU usage, such as TechPowerUp GPU-Z.

Also, I see your H-Drive is at 99%, are you writing or reading data from H-Drive ?
If yes, the drive may be the bottleneck of your system.

Yeah I hope tonemapped is writing to one of the SSD’s and not to the external USB. While I trust USB for general backups and reading data, I don’t trust it for work I can’t recover.

You can display the GPU-ssage in the Taskmanager: you have to select “Graphics_1” for the displayed values (e.g. instead of “Copy”). This is used by VEAI.

Task Manager is wrong if your not using Graphics_1 for the display selection. MSI also doesn’t do any smoothing of the data collection so you get more spikes where task manager is smoothing. There are a number of software packages now that will give you the readings. I like using HWiNFO64 because I can embed the numbers I want to see in the taskbar with Windows 11. What I have is first CPU and than GPU usage in percentage. Than Download and Upload speeds. Finally CPU and GPU power usage in watts. 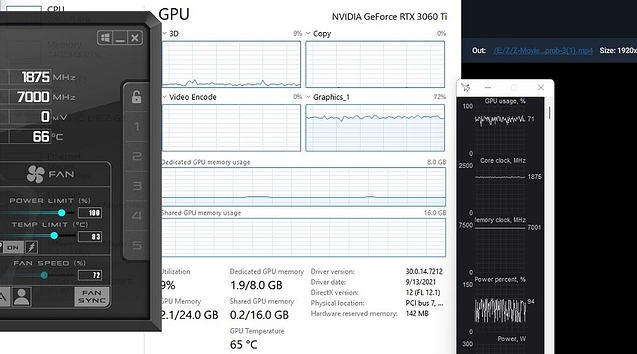 Thanks a lot mike for the suggestion of Hwinfo64, i didn’t know it had as well a taskbar notification ! I was using Cpu temp core until then, but this one is much better, as i can see when i have issue with my internet provider as well !

Hi everyone. Hope you are doing well. I am trying to convert old VOB videos (720x576) to Full HD ones. Should i convert them to mp4 first? Is it going to change anything quality wise after processing? And should the video output be MP4 or images first then process them to MP4 (i think i read somewhere it will be better if the video output will be in images).

Vob Videos are not “Videos” File. they come from an Extracted Dvd usually.

I’ll suggest first to convert them to regular mpeg2 video, with a software called dvdVobtompeg , and then , eventually convert to mp4.

Big chance are that your Vob files are maybe enterlaced, so you’ll have to de-interlace them, with VEAI or an another software.

if you convert your VOB to Mp4 be careful to not have the conversion done to progressive video, because you’ll not be able to remove the interlacing frames issue after.

most de-interlaced treatment in conversion software doesn’t handle very well this. That’s why the models for this with VEAI are interesting. so you need to do different treatment steps.

My thinking is you would be better off converting them into a format like ProRes or similar for a PC. I don’t know how well VEAI de-interlaces video compared to other software, but definitely avoid MP4 files – it will add more artifacts.

Thank you for replying that fast. I will definitely do that. I tried to convert them to mp4 but looks like mpeg2 is a way better option. I will try the software you suggested as well. Thank you.

Thank you for the fast reply. Looks like mp4 is a big no no. I will try VEAI as well. Thank you!

I must confess i just love proteus and it’s parameters.
I use it more and more, especially when gaia produces strange skins … with disturbances on the first step. So you need to do a lot of previews and compare views … to find the right model for the first step. But on dvds its always gaia or proteus … never the softer ones. Try not to oversoften with proteus.

and i never convert the vobs to mp4 before i upscale, since veai has never rejected ANY video i imported

Also this idea of exporting images rather than videos is IMHO pretty nonsense.
I tried and i saw NO, zero, none enhancement over video exports.
And i am working on an 82" 4K video screen … from a 1.5m (5feet) distance
and do lots of single frame cutting… i should see a difference

Last but not least …
10.000 or 150.000 single frame images are much more complicated to handle than a single mp4 file.
On Top its a complete waste of hd space, since 150.000 files can need double as much space as 1 file needs. depends on the blocksize …

So try my 2 steps and you will be satisfied

sorry replying to webstore…
but the forum software prohibits to post another reply to tonemappeds question.

the second instance does slow down the first less than you would expect.

There can be a small but noticeable glitch if you do not cut your original video on keyframes. To make things perfect use ffmpeg.

this will make clean cuts at 3 min or whatever interval you change with. then you can process pieces in video enhance on multiple machines and afterwards put back together with ffmpeg without having to re-encode.

Yeah proteus is like Jack of all trades but it takes a lot of time to do previews and compare them (using gtx 1060 6gb for the moment). I don’t like to use VOB files because my GPU crashes sometimes giving me Kernel Mode Trap( nvidia driver issue but it happens only when I process VOB files).

I never used 2 steps before for a single video. Always tried to get the best results using only one. I will try it and do some compares. Do you have any suggestions for CFR? Do you change it with every video? Thank you for all the information! You saved me so much time