We have another update for Topaz Video AI 3.0 with lots of fixes and improvements. Please provide your feedback.

Proteus Auto Caveats
The adjustments will not be visible and the sliders will show values of “0” when in auto mode. However, each frame is being analyzed for optimal settings while processing. If you keep Auto enabled and modify the sliders, the settings you choose will be value-adjustment percentages. For example, if Auto estimates the Sharpen slider with a value of 50, and you manually select -50, then the actual value applied will be 25.

Please upload videos that are not working or having any type of conflicts to this DropBox Folder.

The side by side preview playback has improved. It’s still not great but it’s noticeably better in this one.

I’m working on compiling a custom ffmpeg with veai and other GPL sources, but it would be really cool if you guys could just make an avisynth plugin so that we don’t have to muck around with this; compiling ffmpeg on Windows is a mess at best; adding a custom patch is pretty tough.

I do hope we can get more info / content added to the pane and the easy 'click-to-change-view for quad comparison- dropdown box like on 2.6.4, and a larger indicator for the speed / seconds per frame indicator instead of in the mini-box when doing previews.

But I did encounter that issue / bug when trying to re-render / do another preview. I think it may be because the speed limit options revert to the older runtimes/encoding methods which are much more inefficient, especially on a clockspeed limited laptop?

To reproduce, while still in the session / application open from an ‘All GPU’ run, revert to your good/proper GPU (ie my) Nvidia A1000. Despite telling it to use your primary GPU only, a speed penalty still in effect.

What I found is to revert to 100% (and only 100%) memory usage / close and open and speed is restored. Atm using any speed limit, even if you’re nowhere near to VRAM usage (600mb VRAM usage reported by GPU-Z out of 4GB) incurs a large penalty on speed and slows it down to 2.6.4 levels on my laptop.

Another bug is that the default container (mov) is selected for the ‘defaults’ in the config menu even though on previous runs I selected MP4 in that area. Strangely the video itself pre-selects MP4 as desired (I believe) which is an inconsistency. 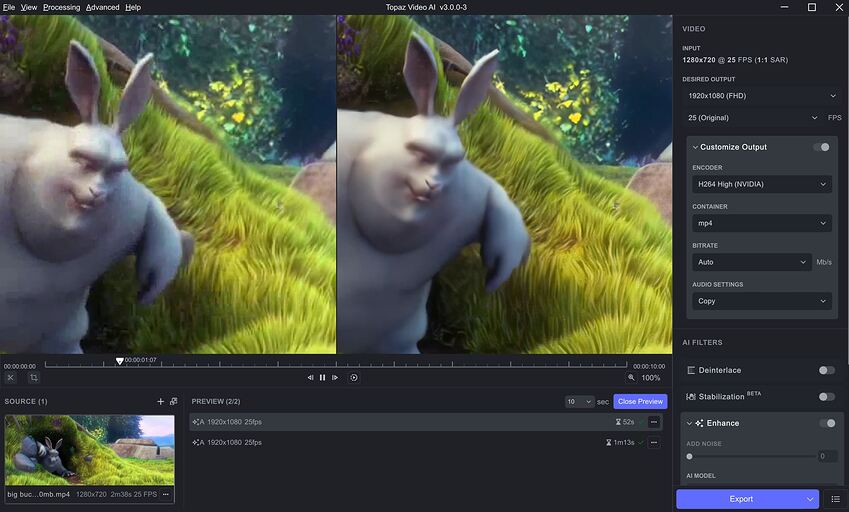 I’m experiencing low FPS in the application itself on my desktop while playing/previewing the video, I never had this problem with any previous versions of Topaz Video Enhance AI. There’s no reason why it shouldn’t be locked to my monitor’s refresh rate (144hz) given how simple the UI is, and we’re accelerating video decoding with GPUs and CPUs now?

This behavior is causing noticeable flickering and weirdness on my Freesync/GSync display, hence me discovering this regression.

For performance, I do not see any speedups for 720p → 1080P or even 1440p (Both taking 0.15-0.16s a frame) video, BUT I have noticed that my 3070Ti’s power consumption while rendering the video is significantly lower for the same results/models/speed etc. From 190-215W consistently to 65 / 85/ 125W (peak) jumping around. This efficiency increase for the models definitely explains why my A1000 laptop was seeing a huge performance benefit, but awkwardly it seems past that my GPU remains underutilized.

Despite me selecting NVENC H264 High for my encoder, while running the Preview the encoding speed on 3b is the same as 2.6.4, and the CPU load is around the same for both versions. I don’t suppose there are ways to further reduce CPU usage on future updates, as for single-video upscales to 1080p/1440P max, I’m definitely still limited by something unrelated to my GPU.

Many videos have duplicate frames for whatever reason. Is there or will there be the possibility to remove those duplicated frames?
it is not visible that every sixth picture is a duplicate if you play the video at 30fps but if you change the fps to 60 or do a slow motion the video starts to stutter.

Duplicate frame removal could be incorporated with Chronos, based on the initial frame rate?
A setting for the number of consecutive duplicates to be replaced with newly generated frames!
Options for how app should deal with variable frame rate and areas of continuous duplicates!

Is it possible to implement version 2.6.4’s UI?
Because this new one is so clunky.

some source videos may have doubled frames already. this might have happened for example if someone took a 23,976 fps movie and encoded it by mistake with 30 fps. in this case it often helps to just convert the original file back to 23.976 fps first to remove the doubled frames.

Will support for AVS files be added to version 3? I don’t seem to be able to use an avisynth file from the command line or by dragging the avs file onto the app like I could in previous versions.

I have excessive flickering too, unless I turn off g-sync. I got an older g-sync display with the physical module (Asus PG348Q) and a 3080ti

Thank you for your feature requests

Grain adds texture which can give the output a more lifelike appearance.

Adding a small amount of noise before converting media to any codec is a good way to reduce compression artifacts.

What about v3.0’s interface do you find to be clunky? The more specific you can be the better.

If I’m being honest. All of it. It’s harder on the eyes, the options now all make less sense. I loathe the fact you can no longer just tick a box to select all the files for bulk jobs.

The old UI is just so seamless. Go back to it and keep the new AI models. Don’t fix what isn’t broken. Pleeeeeeeeeease.

Hi, unfortunately, we are not able to support AVS due to a licensing issue.

Thank you for your feedback

The ability to select all and batch process will be added back in prior to release.

avs is the file extension for avisynth. I’m not sure what licensing you’re referring to?