As has been the trend, we have another weekly update full of changes! This week’s update contains a couple experimental features we’d really appreciate your feedback on.

I checked PaintShop Pro 2023 and the plug-in was recognized/loaded into the program. 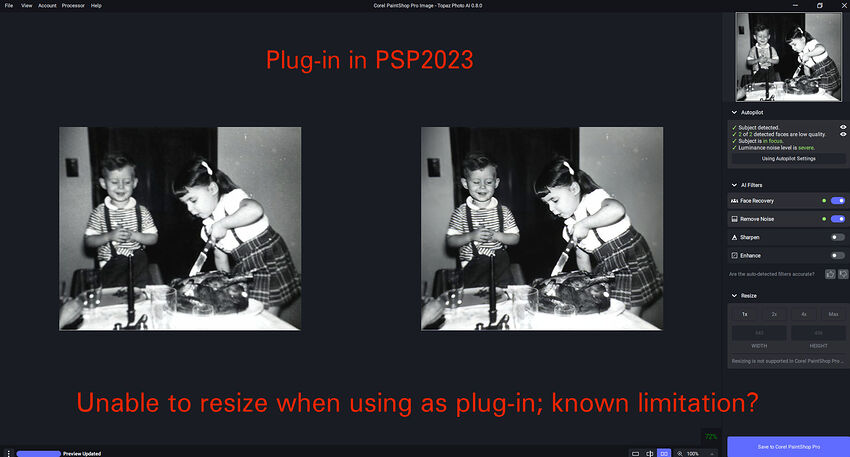 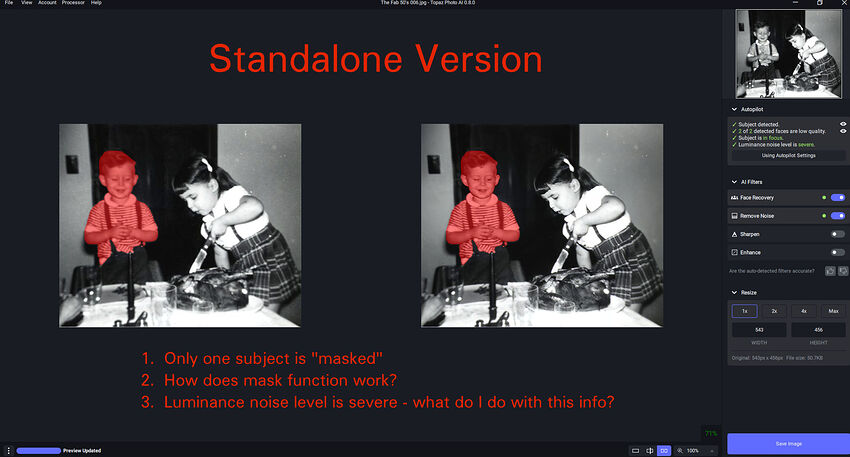 For any moderators who jumped the gun a little bit, I’d suggest re-installing the update. There are a couple changes made prior to the release being officially out

And @Kathy_9 resizing is not supported by Photoshop’s plugin spec, which is what PSP uses. Unfortunately that means resizing won’t be an option for them or any other editors that invoke TPAI as a photoshop plugin.

I asked this in a thread for an earlier version of the beta, but none of the developers answered. Will Photo AI do lens corrections for m4/3 raw files? Unfortunately, Denoise AI still does not. It makes using the raw mode pretty useless. Thank you.

Missed finding the subject on 1 photo. But, was on the money on the others. Bird sitting on a limb but it only selected the limb. The bird was a small part of the photo and although can be seen clearly it was surrounded by leaves. Probably the reason this happened. These things are going to happen once in a while and this is the first time in a long time it has failed to find the subject. And, that rarity can be covered when there is a brush link in Sharpen AI.

The RAW Adjustments did a good job on a Nikon NEF. Basically applied the lighting, contrast, saturation, temperature, and tint. Just a bit of each and liked the results. However, I would have to think about it before I decided to change my workflow to make all the adjustments here. But, I know there would be times I would be comfortable taking the RAW straight to JPEG using Photo AI using the RAW Adjustments. If the RAW Adjustments are kept in then it would be good if the data entry areas could be double clicked to reset the adjustment to 0 instead of having to type in the 0 and hit return. Having an increase/decrease by 1 beside the adjustment value would be nice so you could tune the setting a bit. Sometimes, kind of hard to get the slider exactly right and stoping to type in a new value is awkward.

The improvement percent being shown is a good touch. I noticed that when I adjusted sharpening it reached a point where it displayed a lower percentage that I started with. To my eye when the percentage was highest it looked the best.

Very satisfied with the results I got back when accepting the Autopilot settings.

When the DNG files created by Photo AI were loading into both SilkyPix and Affinity Photo they appeared with no discoloration or any problems that I could see.

The RAW files used were NEF files from Nikon D7100.

I am a 75 year old hobbyist who sells his photos. That’s where I’m coming from. Figure you might to put that in the equation.

No sure about the RAW adjustments, takes a long time for preview to be updated so very difficult and/or time consuming to make exposure adjustments in PhotoAI, even turning off other options such as remove RAW didn’t speed this up.

Can now open a RAW file or send one from On1 and have result sent back as DNG without the colour cast I was getting with 0.7. However, the .xmp file associated with the RAW files are ignored, so keywords etc are not transferred to DNG file.

Back working as plugin from On1.

I am sending Raw files from Lightroom, yes, Raw files not a Tiff.
Takes too long to make Raw color adjustments, I just save as DNG file and process in Lightroom, results look very promising.
The mask is hit and miss, sometimes average at best, when comparing with the standard in Lightroom masking.
The analysis of Noise and Focus is not always correct.
I have sent the same file as an unprocessed Tiff and Raw and it completely analyzed them differently.
The analysis is meaning nothing to me, <1> to <36>.
When retuning the processed DNG back to Lightroom, it produces also a copy NEF.
To bring the files back to Lightroom I pick them up from my Synchronized folder.

When using on a Sony ARW file, the results have lost all detail and look awful. This wasn’t the case in prev revs.

Not seeing the problem if PhotoAI is called from within Lightroom.

For RAW files can you add an entry in Lightroom Plugin Extras like DxO Photolab 5 so that the RAW file can be used and the result is sent back to Lightroom. Currently, one has to launch PhotoAI from outside Lightroom and process a RAW file and then when done, synchronize back to Lightroom. Too many steps.

Disappointed to see that resize took out the means to resize a fractional amount. I like having that in there and use it a lot. There is now the means to input the desired X or Y number of pixels, but usually, I don’t want to bother figuring that out. Just want to resize n.nn X and I do use this.

Is there going to be a batch mode?

the “apply settings to all” function is still missing since 0.6

In ALL versions so far, I have same problem:

1)I have scanned a film neg with Epson V550 as a .dng
-Topaz and LR recognize no problem, but…

If I try and open the .dng file saved by Topaz Photo AI in PS , PS gives me this error message" Could not open because the file format module cannot parse the file"

Ive been told this due to a bad PS IRB resource in the ITP protocol?

Downloaded & installed Photo AI v0.8.0 and still have the same problem as with all v0.7 versions, when I try to open Photo AI form the Filter dropdown menu in Photoshop, Photo AI tries to open, but just crashes with an error message & a crash report. I thought version 6 was great, but since then, as far as I’m concerned, Photo AI is a load of rubbish.

Implementing RAW Adjustments is a great idea and a great improvement of the Tool.

I´m sorry, but for me non of my issues are fixed (StandAlone Modus):

2. Still no Thumbnails for Canon cr2 and cr3 files
There are still no thumbnails shown using cr2 or cr3 files. using old NEF file it shows up thumbnails. See screenshot above.

Tried to update from within PhotoAI and it didn’t go well. Froze my PC. See how the download goes.

I have several images where Topaz Photo AI messes up the image. This happens either with denoise or with sharpen the image.

The download went OK. The RAW adjustments might be a bit much and of limited use without a histogram. I’d actually prefer just a histogram and curves. All I want to do at this stage is set the black and white points and maybe lift the shadows as I think noise removal works better then. Processed a Sony ARW file with no problems.

Hi,
I use(d) Topaz Photo AI (v0.5) to batch upscale about 5000 images.
It was a bit fiddley*, but I successfully made it work.
Fiddle: Unfortunately, I had to process everything twice since the “apply all” feature didn’t work correctly.
I understand the “apply all” feature was removed in v0.7.
I cannot use the GigaPixel AI since it keeps breaking with auto settings over roughly 100 images (depending on settings, but I cannot process 500s in a batch).

What is the expected workflow for upscaling a large number of images with given settings?
I cannot find a way in v0.8.0 to batch process.

When using standalone PhotoAI, Sharpening crashes program right away, I have 12-core Amd cpu and 3090 nvidia.

A bit off topic but “If the Installer can do this in Photo AI for RAW files could it not be incorporated into the stand alone products also”?
Thankyou.