As many of you are likely aware, the Topaz Labs team consists of just 11 people. Because of this, the updates you’re receiving are the result of the combined effort of the entire company, each and every time. I’d be lying to you folks if I said it doesn’t take its toll on us. We’re a hard working group, we’re passionate about our work, and we love making our customers happy and excited about our products. All that said, our CEO, Albert, decided it was high time we took a bit of a break, and spent some time with each other and with the product itself. Thus, the Topaz October Photowalk Contest was born. Here’s the scoop on what this post is all about.

(Two of us couldn’t make the photowalk today, unfortunately!) 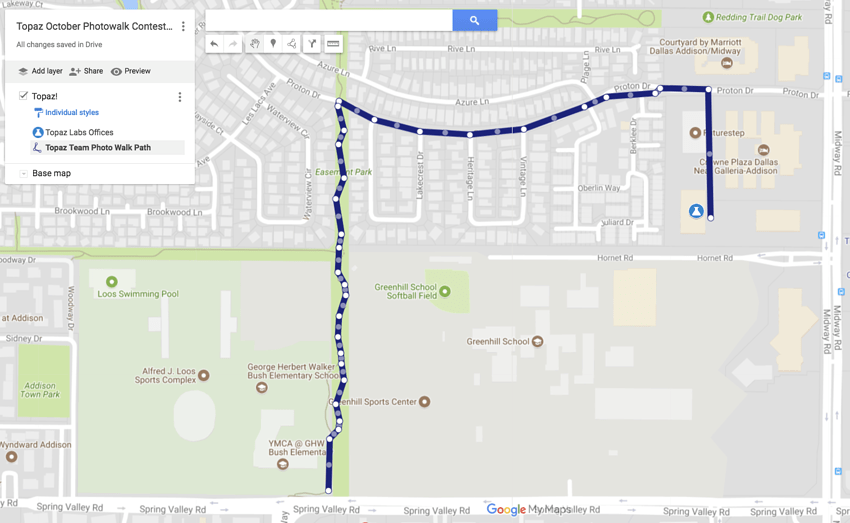 What we used to edit

We used ONLY Topaz Studio to create these images. Furthermore, some of the images were created using only free Adjustment types, or Adjustment-level presets we provide you for paid Pro Adjustments. I bet you can’t guess which ones used the free Adjustments, only!

#Time to Vote!
####Pick your favorite image from the 11 available below

We aren’t sure what the prize will be just yet, but for now, it’s a lighthearted contest among colleagues. Unfortunately, originals were not supplied, but there were some pretty nice before/after comparisons. We might post those later, after voting has ended.

Tell us which image you like, from the Topaz Staff to you!

#Poll has been closed

Don’t be afraid to comment, too! I’d like to hear guesses on who submitted which picture - I purposely hid the creators

I voted for this photo (image # 2) because: feeling of strangeness; movement in the photo; color mix and Black and White. This picture immediately hooked me;) Pierre.

I picked image 7, maybe because of the colors or the reflection in the window. This was the image that I found myself looking at the longest. There was several other that I liked but I could only choose one.

I was torn between 1 and 6… ultimately going with 1 because there appeared to be more ingenuity and thought to it.

I forgot to mention - we shot all of these with our cellphones!

Thank you for saying with camera you use ! Here an article that i agree not too all but about the sort of camera vs the photographer ! Here the link:
http://kenrockwell.com/tech/notcamera.htm