I just upgraded from my Details stand-alone plugin to the (Precision) Detail in Studio version. I was thrilled to read the announcement since Clarity and Detail are/were my must-have plugins, and are now both available in Studio.

However, in comparison to the stand-alone plugin, the Studio version creates very visible halos e.g. around dark lines and edges and other detail when using the Small/Medium/Large Details controls.

Thank goodness I can invoke the stand-alone plugins via the Plugins menu, but I’d prefer to have a similar halo-free performance in Studio’s Precision Detail.

Quite disappointing to see the halos in Studio Detail. Perhaps someone from the Topaz team will take notice, or perhaps you could post in the product bugs section,

Quite disappointing to see the halos in Studio Detail. Perhaps someone from the Topaz team will take notice, or perhaps you could post in the product bugs section,

Best thing to do is to get all the info together such as the image type, compression, color space and then slider settings, and examples of the haloing and raise a technical support request.

For example this is what I see with Precision Contrast vs Detail max low/medium/high settings… and there are noticeable halos around the Studio version. 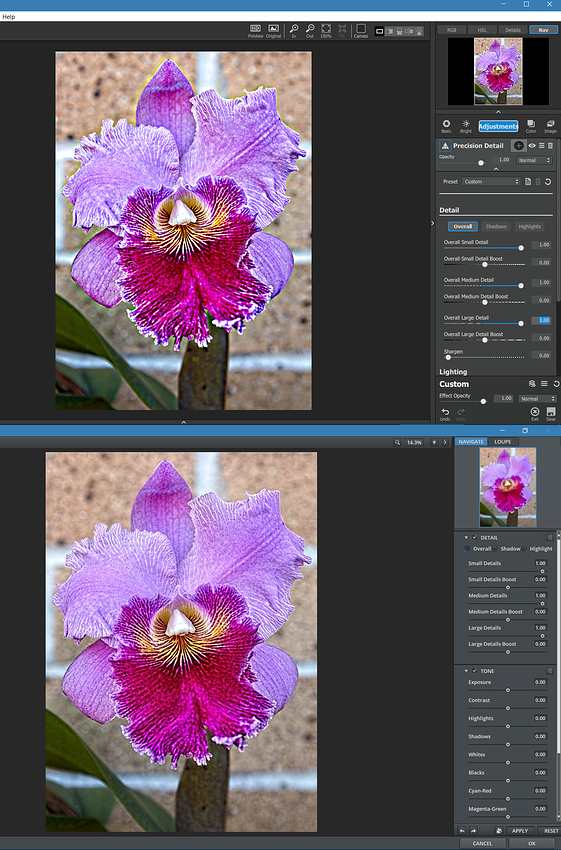 As an illustration of the difference between Detail V 3.3.0 and Precision Detail V1.3.3, I’ve attached a GIF animation of a cropped image area that demonstrates the issue below. The original source image that was used is a 16-bit/channel TIFF with Adobe RGB profile, and was opened in Studio, after which I did 2 separate operations, once with the Detail plugin, and once starting with the original again, with Precision Detail. I’ve only used the Small Detail control, in this case at an extreme setting of 0.50 to make the issue clear, but it happens at all amount settings, but obviously, also the halos vary in visibility at different amount settings.

The Medium Detail control does a similar thing, although with dark halos around dark features, as does the Large Details control, and obviously for different feature sizes. But the Small Detail control should make the differences already clear enough.

The main issue is, besides the different results between the Plugins, that one of the major strengths of the Detail Plugin (halo-free detail enhancement) are totally absent in the new Studio version, which renders the new plugin pretty much useless, and also much more difficult to use creatively, IMHO.

I’ll also raise a technical support request since I assume that this is (I hope) an unintended effect, but not limited to my Win10 PC setup. The reason I first posted it here, was to see if I’m the only one affected. 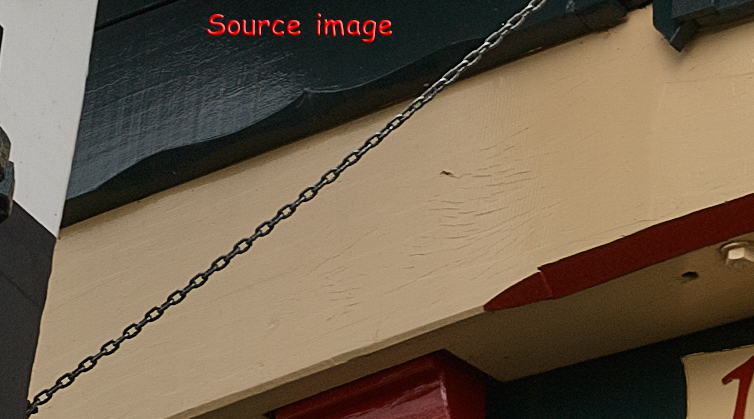 P.S. It apparently does not happen with the Small/Medium Detail controls, but only with the Large detail control), when I open the attached cropped JPEG version of the source image, but with the full size TIFF source and with a full size JPEG version all 3 controls cause issues, so that starts looking like a Tech support issue indeed.

It apparently does not happen with the Small/Medium Detail controls, but only with the Large detail control), when I open the attached cropped JPEG version of the source image, but with the full size TIFF source and with a full size JPEG version all 3 controls cause issues, so that starts looking like a Tech support issue indeed.

Haven’t tried with a JPEG because of compression, but I see it cutting at the following on a TIFF (not extremly large at 32Mpix) when using a single slider … they may just need to tune it:

Strangely enough, I just tried it on a JPEG straight out of a Fujifilm X100T and the haloing isn’t noticeable. But it is on a low quality JPEG.

Apparently, things are happening behind the scenes. I just got the Studio V1.3.4 update which wasn’t shown as available until a couple of hours ago, and the halos have already been reduced considerably, but not quite down to the separate Detail plugin’s level. Also, the halos of the Medium and Large Details look quite different, much better.

Not that I’m complaining as much about improvements being implemented, but I do wish the info about “what has changed” in new releases would have mentioned this. The notes for this V1.3.4 release do mention that they have changed several issues with the Precision Detail plugin. It’s now a bit of trying to hit a moving target. Just when I was going to report the issue to Tech Support, my observations need to be updated as well. Are they still working on the issue, or is this (V1.3.4) it? IMHO, there’s still room for improvement.

We have been working on this. The notice about the improvement to halos is in the V1.3.4 section of the Changelog:

Check here for the latest changes to the Topaz Studio application! We know things can change quickly, so this is the best place to check for the most recent fixes, improvements, and features. ~~~ ...

We’re going to keep working on the halo. The new algorithm is much faster, but we’re still refining the prominence of edge halos due to some types of smoothing, when you increase the strength of the detail sliders.

Thanks for letting us know that the work is still in progress. I won’t have to add to the official list of Support Requests now that I know that you’re already looking into matters.

And yes, the speed improvements with Studio as a host application are much appreciated.

Since the plugin version uses an algorithm which takes 15-20seconds of preprocessing, it cannot be used as an adjustment. We actually invented a new GPU algorithm that is fast and good enough to put Detail into TS. Now we know that it is not the case. This now becomes one of the top priority to make it halo-free. It could take weeks…

Thank you guys to hold us accountable.

You can count on us

Thanks for your explanation and good work. Appreciated.

After considerable effort, Beta 1.8 updated “Precision Detail” with a new method. It should achieve a similar or slightly better result as in Topaz Detail plugins’ method. Unfortunately, it is slower than the initial release of “Precision Detail” adjustment which is fast but has noticeable halo.

There is no change in the sliders arrangement.

Please give it a spin and let me know what you do think.

Thanks again for your pointing out those problems.