Hi there,
Just a thought. I’m really liking the results I am getting with DeNoiseAI in its variuos guises. I do a fair amount of conversion to black and white but I do not have a dedicated B/W converter programme or plug-in. I just use Photoshop Elements which is rather limited.

My question is; before I go spend £ on another product, are there any plans for Topaz to bring out a black and white converter?

We are only users like you so we have no idea if there is to be a dedicated B&W converter. Studio 2 has the capability to convert your image to B&W and you can download a trial from the main website. 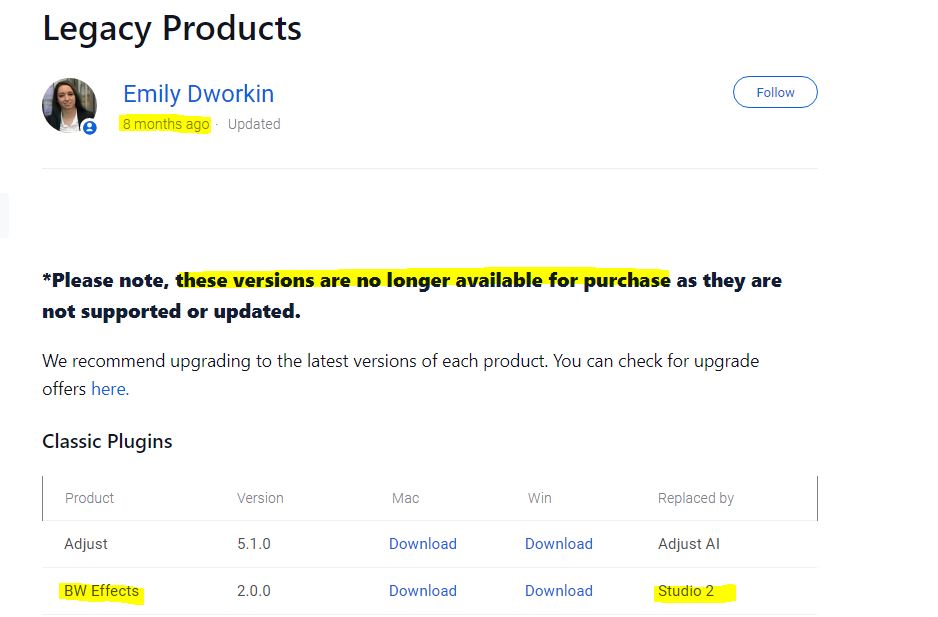 Turns out you can still buy Topaz BW Effects. It just takes some finding.
the page at “https://topazlabs.com/bw-effects/ref/81/” is still active and the download link still works on the legacy products page. “https://help.topazlabs.com/hc/en-us/articles/115001521092-Legacy-Products”.
If the functionality is now in Studio 2 and BWE is no longer supported then one could ask why buy it? but it is advertised at $59.99 vs $99.99 for Studio 2. https://topazlabs.com/studio/
The funny thing is that Studio 2 is not advertised like Gigapixel, SharpenAI or DeNoiseAI so I had hardly registered its existence. It only appears near the bottom of the all products list so I wondered if it was actually actively being developed at all?

Sad to say, but TS2 is being treated like the ‘mad uncle in the attic’ - spoken of in whispered tones - and rarely seen in public!

For the record, the functionality is way different between B&W Effects 2 and the B&W filter in Studio 2.

In Studio 2 the B&W filter is basic (Not saying you can’t produce similar end results using it in combination with other filters) but BWE2 has a range of canned effects and Presets, Adaptive Exposure, Dodge brushes, curves to name just a few.

B&W Effects 2 is just a plugin though that does require a host editor. It still works on Windows 10 as a plugin from Affinity Photo, and also from the original Studio (Classic, or Studio 1 or whatever that is now officially referred to), but it can’t be used from Studio 2.

It also needs to be registered, and that raises the question “Can you actually now get a registration key for it”.

I purchased and registered the original B&W Effects in 2013, then updated to B&W Effects2 when it was released, and I still use it occasionally. I certainly would not pay USD$ 55.99 for a plug-in that is no longer supported, even if it can still be registered, but equally in my view there are other products that offer as much and arguably more than Studio 2 for its USD$99.99 (AUD$134.61) price, particularly given the lack of development of that product over the last year.

I will close this thread as the only option is Studio 2, the BW Effects download, as is all other legacy products, are there for the convenience of existing owners. Legacy products are no longer for sale and haven’t been for years.