My issue is as follows:

Peter, welcome to the forum.

I’ve exported both 8 and 16 bit LZW compressed images, and 8 and 16 bit with no compression images from Mask AI, and they open quite OK in Affinity Photo (current build), also in ACDSee Ultimate 2022, and in Luminar 4 (I don’t have Luminar 3). That was choosing the “Transparent” option.

The Trimap, Alpha only, and Composite images can all be opened in Edit mode in ACDSee Ultimate 2022 (it does see the Alpha only TIFF as just a white on black image, but it can be converted into a mask.

However 8 bit, 16 bit both compressed and not compressed TIFF’s of the Trimap, Composite, and Alpha only fail to open in Affinity Photo, and cause it to immediately crash.

And they don’t open in Gimp either. It just hangs and requires task manager to shut it down.

I’m can’t say I’m surprised about the Trimap. Its only real use is in Mask AI, and it does load back into that OK. That said Affinity shouldn’t crash and Gimp shouldn’t hang.

I’m also not surprised that Affinity has issues with the alpha only image, as Affinity handles alpha channels differently to Photoshop. Again though Affinity shouldn’t crash, and Gimp shouldn’t hang.

I am a little surprised that the “Composite” causes issues. Perhaps it is being saved as a TIFF with layers in a format that neither Affinity or Gimp understand, or perhaps there is actually something wrong with those particular exports Would be interesting to hear whether they can be opened in Photoshop.

Thanks so much for your reply - glad to know that it is not just me! I don’t have acdSee, just the ones I mentioned and I also do all in my power to avoid Adobe products so no Photoshop either, lol. I have tried again as per your suggestion and yes, the Transparent mode did open successfully in Affinity BUT the whole point of buying Mask AI was to use it to merge photos and my composite image is the one I want! It seems as though it is a complete waste of time and money? Any thoughts?
Best wishes and thanks again.

So in other words, do the “merge” in your host editor (Affinity Photo), not in Mask AI. That way you have all of the functionality of Affinity Photo to tweak the background and foreground.

To enable Mask AI as a plugin in Affinity Photo, go to Edit/Preferences/Photoshop plugins and add the link to Topaz Kabs LLC as per the screen shot below. Make sure you tick then Allow “unknown” plugins to be used box, close and restart Affinity Photo. 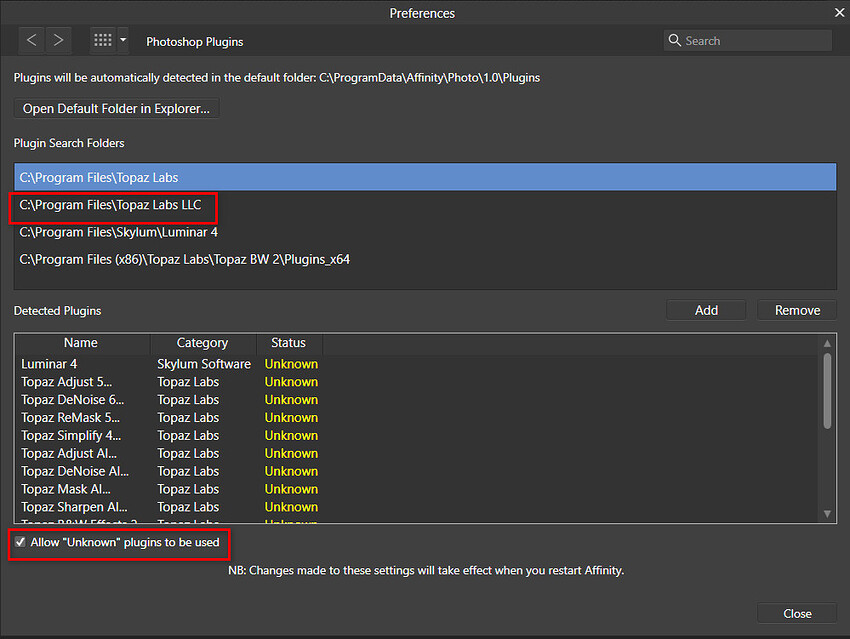 Thanks so much Greyfox. I still have a long way to go with this but I will explore and test over the coming days to see how this all works. I’m sure that I’ll have a lot more questions about how all comes together but that’s how all the fun happens. I have the Topaz software all linked as plugins as well as Luminar 3 - now to see what to do with them!