If nothing else, I am a prolific dreamer. The dreams are bright, colorful, and most often whimsical. But seldom do I have any idea where they come from. A couple nights ago, I had my first dream about my cell phone and an image taken several years ago in Portland. I had completely forgotten about the image and it took like forever to find it tucked away in of all places, my Google Drive.

Originally opened as The Portland Publix Theater, it became the Paramount Theater and is now known as the Arlene Schnitzer Concert Hall, or the “Schnitz”. The Schnitz has a rich and glorious history. In 1975 there was an auction to sell off the theater organ and statuary. During the auction, there was a general outcry from the audience to keep a particular marble statue, called “Surprise” (a nude girl with her hands thrown across her face) in the theater. A hat was passed among the 1200 member audience to take up a collection, and $5,233.97 was raised to purchase the statue and keep it in the theater lobby. The statue has a finger missing from a bullet from a box-office robbery in the 1950s.

As I worked on my rendering and reflected on my dream I had to wonder if somehow, back in the day, I had been there. Where do dreams come from anyway? 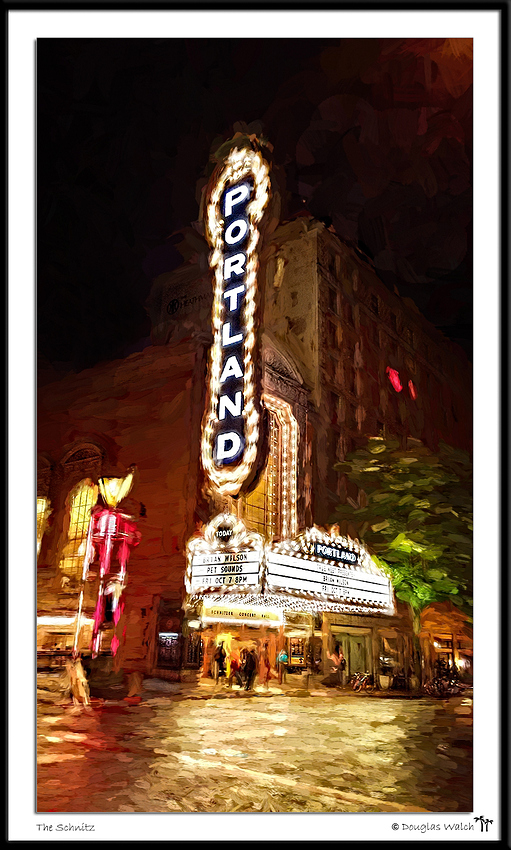 Interesting story and nice painterly look to the image.

Superb processing. I love images of classic cinemas such as this one.