Still trying to find a workflow that creates the Rockwell look. It helps if your original image has exaggerated facial expression or posture. This was a black and white photo I tried to give the Rockwell look. I’m always a little confused as they say I should desaturate the image …but many of the Rockwell images I have seen are very saturated in color. So I did the best I could with this …your thoughts are appreciated. 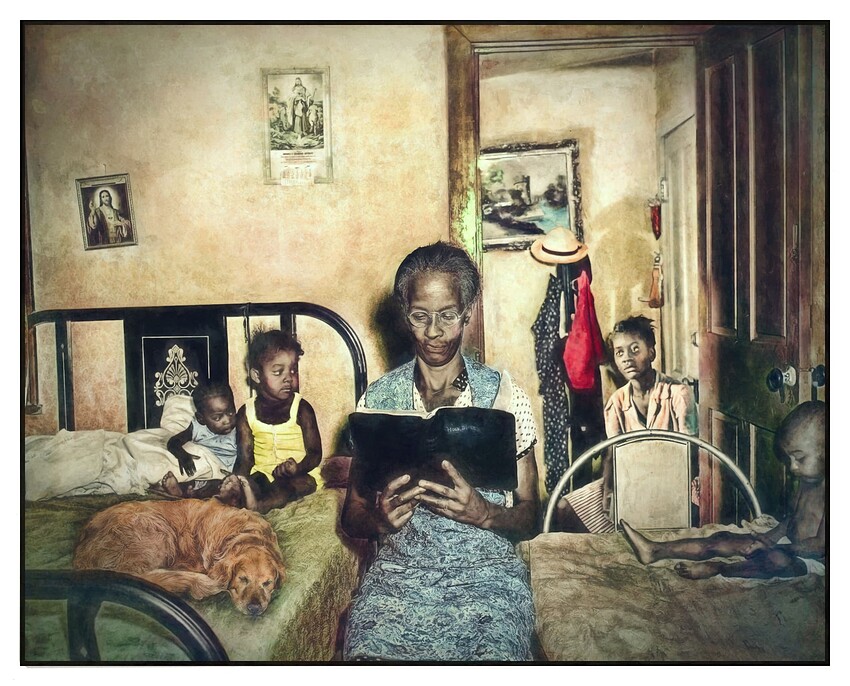 Great job on colorizing Bob. I know what you mean about saturated vs. de-saturated. I’m thinking saturation is okay on the subjects but de-saturated background that fades around the edges.

Thank you Kathy, I appreciate your insight and comments …

I really like the effect and I agree with your comments about Rockwell’s style, the only thing I see that kind of stands out is the face color seems to be blown out, but it doesn’t really affect the result just draws your eyes to them.

Thank you Don, love your insight. Yes, the faces seem a little washed out. I did try to put some red on their cheeks as Rockwell seems to do that alot. Again, makes me wonder about the no saturated vs. saturated look of Rockwell.

This is intriguing to me.

It’s like a mix of Rockwell & Gordon Parks’ style of photography. Both of whom produced work I really admire!

It’s like a mix of Rockwell & Gordon Parks’ style of photography. Both of whom produced work I really admire!

Rockwell was what I was going for …was not familiar with Parks work, but yes, you’re right, it looks like a cross of the two artists. Thanks for the info and education…

When I look at a Rockwell it strikes me there are a number of things that embody his style:

His color palettes are from another era too.

You’ve captured a lot of that!

Agree with everything you said …I have tried to darken outlines of people. I think there is a lot of Black in Rockwell’s work. Burning and dodging helps get that look.

I appreciate it Ken, thank you …