Studio 2.2.0 is very slow to load the ‘Looks’ previews.
It takes minutes. Lots and lots of minutes. 6 minutes so far and still not all of them loaded. Very frustrating.

This is a new install, freshly downloaded from Topaz. So how do I speed this up?
I can certainly see me not getting anymore Topaz products (and I have quite a few now).
There seems to be a new direction taken within the company and they don’t seem to be listening to what their customers are saying.
Please Topaz people, fix all the faults first before pumping out more products.
Can anyone offer any help re the slow load times?
Thanks.
ps. I have put in a Ticket about this but won’t hold my breath for a quick response at this time of year.

Your driver is out of date so try updating that from the NVIDIA website and, if you have more than one GPU on your PC make sure that Studio is allocated the high performance GPU under the System Settings, Graphics Settings.

I have a 1050 and have no performance issues.

Nope…updated driver…no change.
Took 6 minutes for the Looks previews to fully populate.
I had previously tried a couple of other (older) nVidia drivers to see if that helped or not.
This latest driver is slightly faster, but not by much.
Here’s the photo, not too involved, shouldn’t take 6 minutes for the Looks to work it out surely? 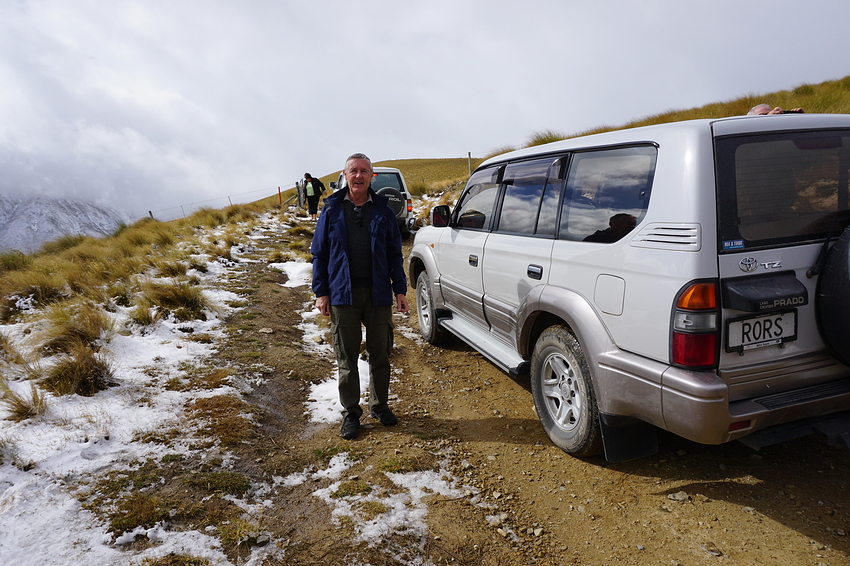 Can I remove ‘Looks’ I don’t want?
I only use a few of them anyway, so if I can remove some of them (probably 70% of them are fairly junky looking effects), then I have less ‘Looks’ previews to populate.
That would speed things up?
Tried the graphics set on High Performance and it took the same time…6+ minutes.
Then checked all the apps and found two Studio 2 apps. One was the Beta (obviously when it updated it never removed the Beta first). I uninstalled the Beta, and the new Studio 2, went into registry and removed Topaz LLC keys.
Then reinstalled Studio 2.
Result is now 1 minute faster…only takes 5 minutes.
Got to be quicker than that surely?
Thanks for input so far Don.

Hi, it should be much quicker than that and you are sure you only have one GPU on your PC?

Also Topaz Studio should have been uninstalled before updating to 2.2 because of the change in install location … I don’t see why you would have beta installed as i can’t see you on the testers list.

Yes, just one GPU.
I installed the Studio 2 when it was first announced (yes, bad idea. You would think I would know by now to wait about 12 months first).
That was a snafu and (like many others) I wanted the ‘old’ Studio back.
That was installed direct from the Topaz link (that Topaz gave out to all the upset people who didn’t like the Studio 2).
Then Studio 2 was updated and updated, but I kept the old Studio as it is so much better.
I only found that Beta Studio 2 today. Maybe it was the first version that Topaz let out to the public, and that nobody really wanted? Topaz just never got around to renaming the Beta first before releasing it?
Have you tried my photo to see how fast your ‘Looks’ populates all the previews?

The old studio has always been available on the legacy download page at this link:

Please note, these versions are no longer supported or updated. We recommend upgrading to the latest versions of each product. You can check for upgrade offers here. Classic Plugins Product Ver...

Can you run the dxdiag utility, just type in the search bar and save the information then upload the text file here.

As for the beta version i haven’t seen it available on the Topaz Labs website.

Or is the AMD card any good?

I do like the NVIDIA gear though. Seem to have less trouble with it.
You are welcome to suggest a card to speed up my computer. I will be updating it soon. Might add another 16GB RAM as well.

OK, I see what you mean as if I scroll through All/All it takes over a minute to get to the end with all previews showing. But certainly nothing like the times you are getting and I have the following setup and as I am not a gamer I use the Studio Driver:

If you want to delete Looks you will find them here, but remember they will be back to normal on the next update, and remember your program data may not be on D: drive: 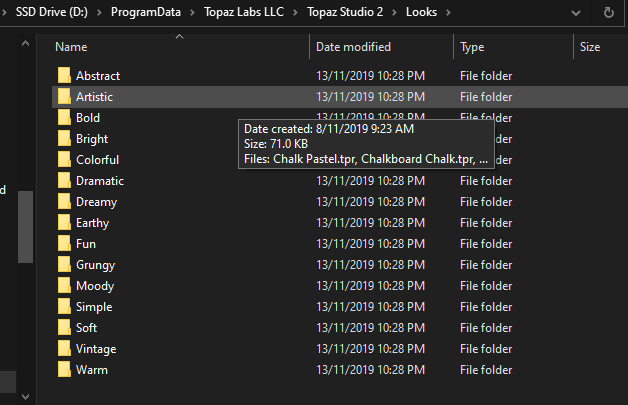 Your Personal Looks are in:

As for the GPU I would go for the RTX2060 but I also prefer NVIDIA but other people I know haven’t had any issues with the AMD GPU’s.

Thanks Don.
I tried the Studio driver but didn’t see any difference.
You have the 1050 card, while mine is the 1050 Ti (which should be faster).
Very strange.
I think I will get a new card in the New Year (it’s a wee bit late to order one now).
I like the ‘Super’ version as it has DDR6 memory, and 8GB of it.
That should sort the ‘Looks’ previews out!

Rather than going to the trouble of deleting all the canned looks I don’t use (which is the majority of them), and risk having to re-do that each time there is an update, I applied the few canned ones I wanted one at a time, and saved them. That put a copy of those few canned ones, plus my own saved looks all in the My Looks category. Once the My Looks category has been selected Studio 2 remembers the category setting, and I can get to those looks almost instantly.

Funnily enough Greyfox…that’s exactly what I thought about last night.
Saved what I wanted into My Looks, with a separate copy saved elsewhere so that I can always find them (in case a Studio 2 update wipes out My Looks).
Thanks for all the ideas and help people. Much appreciated.
I will be building a new computer in the New Year anyway…just have to figure out what bits I’m buying.
Graphics card will have 8GB though for sure.
As Mond said…the software should be tailored to the hardware. Sadly, as can be seen by all the canned ‘Looks’…the developers spent more time playing with the program adjusters to make those ‘Looks’, when they should have spent their time making a nice precise snappy program code job that actually worked right from the start.

Even though I now have only 31 ‘Favourite Looks’ that I’m using they load very slowly still.
Takes a minute for the 31 to load.
Done a couple of fresh installs to be sure I’m not doing something wrong…but still no good.
Although it is faster than waiting for all the 300 or so ‘Looks’ to load.