I recently noticed that when I go to “All Products”, and look over in the right column under “Product Categories”, it shows “Adjustments (23)”, when just a week or two ago it showed “Adjustments (24)”. I had a feeling what might have been missing, and sure enough, “Sharpen” was no longer there. Has Sharpen AI replaced the Sharpen Pro Adjustment?

As a test, I was able to add the Sharpen Pro Adjustment to my cart from this URL: https://topazlabs.com/sharpen/, but Im wondering why it’s not listed under the “All Products” category anymore?

Not as far as we know as Sharpen AI isn’t an Adjustment it is a standalone.

So any idea why the Sharpen Pro Adjustment suddenly doesn’t show up under “All Products” or “Adjustments” anymore?

No I have no idea unless it is a web site mistake, as this is a user to user forum you will need to raise a support request at the Need Help? Link above.

Wow, so I just bought “AI Clear” last night, and then today I see that along with the “Sharpen” adjustment I originally posted about yesterday, both “AI Clear” and “Reduce Noise” are no longer listed under the “Adjustments” link either. So now we’re down to 21 Adjustments (even though it still says “[Adjustments (23))”. The Topaz DeNoise plugin is no longer listed either. Given that DeNoise AI was released today, I assume that it replaces the AI Clear, and Reduce Noise adjustments, as well as the DeNoise plugin? I hope all the functionality is still there, and DeNoise AI can still run on my MacBook Pro.

Both Sharpen & AI-Clear still showing for me…

If you go to "Topaz Studio, and scroll down, then yes, all the previous adjustments are there. But if you go to the store and look at the “Adjustments” link, they are not.

It is my recent understanding that AI-Clear & Sharpen are being deprecated in favor of the new (released today) AI-DeNoise.

They are still for sale: 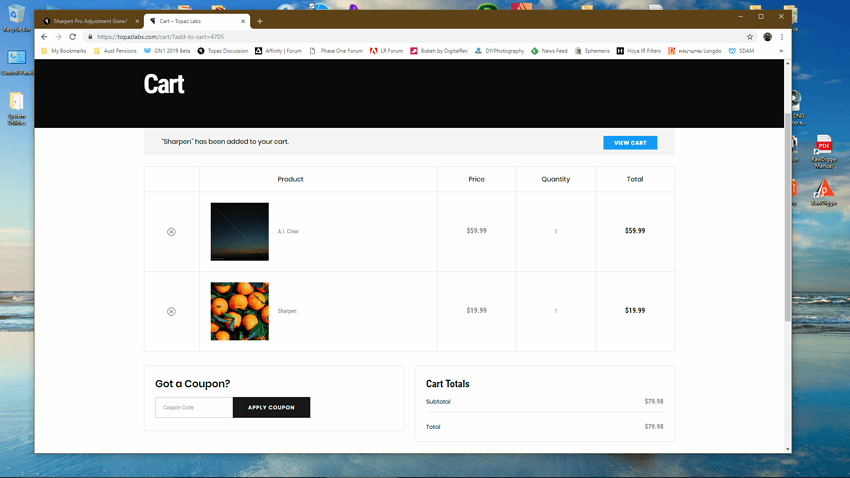 I’m not sure why they don’t appear in the lists but I will close this thread to further speculation. Topaz should be able to fix this as the web site is upgraded.