You may want to allocate your AMD GPU to Sharpen AI using the Graphics Settings in the Windows Settings. It should make a big difference as the Intel 4600 showing as in use is not supported.

Thanks! Since this is a recent addition, I had forgot to give it to the Radeon. I just did several renders and zooms with no problems, then it started crashing again.
FWIW, the Intel chip may not be supported, but it renders faster than the Radeon, at least on my system. This build, when it doesn’t crash on me, does OK on either chip, just a bit faster on the Intel. The previous release didn’t give me any problems on the Intel GPU, just the occasional black screen for a preview.

Hi Adam, It seems as though there are some other changes as previously Auto Mode gave me Sharpen whereas now it goes for Focus … 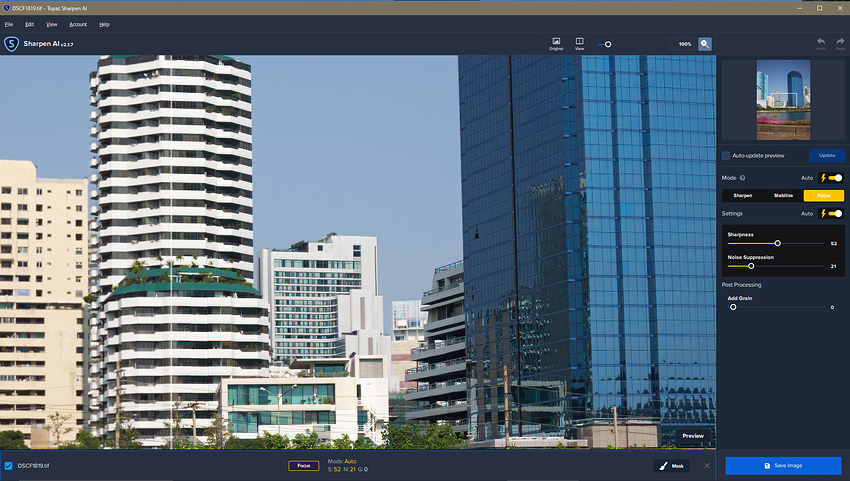 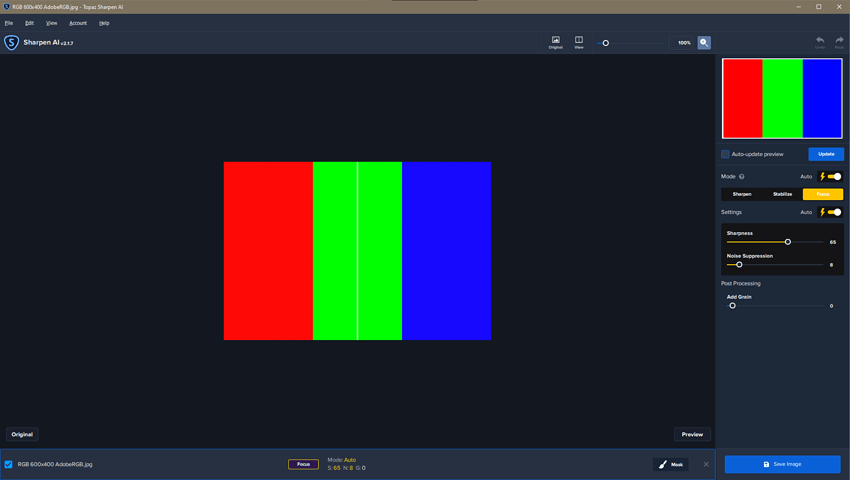 Perhaps this is something about AI models?

Don, how about the speed of this version? You reported that one of the recent releases was very slow compared to previous?

In last version with stabilize method, there are vertical lines in the areas with flat colors.
In the next days I want publish the before and after images.

I guess in GPU mode? If so, this is long-known issue. Please, let us know if this happens in CPU mode.

Yes, the work was in GPU mode, in the next days I will try in CPU mode.

I also get vertical banding when using GPU option and ‘stabilize’ profile. Have the devs acknowledged this issue or announced they are working on a fix? It’s a major issue!

This happens in DeNoise AI and GigaPixel AI as well (on some images). The developers do acknowledge but seems they do not know how to fix. So far, the best way is to use all these applications in CPU mode, with or without OpenVino (as it also produces different, sometimes unpleasant result).

Remember that Stabilize is only for camera shake. It won’t fix any other situations such as focus or general softness.

It also fixes perfectly motion blur of an animal/bird due to insufficiently short shutter speed (as shown in the pigeon photo on the program cover, by the way). For this reason, I use this mode most often.

It also fixes perfectly motion blur of an animal/bird due to insufficiently short shutter speed (as shown in the pigeon photo on the program cover, by the way).

Actually it is “Sharpen AI’s Stabilize module has been trained to reverse motion blur and make handheld images look like they were taken from a tripod.”

But if it works for you then you should keep using it in that way.

I respectfully disagree, if you look at the product page and scroll down to the description of the stabilization module: https://topazlabs.com/sharpen-ai/

“Animal Photography
You can pose people, but it’s much harder to ask animals to stay still! Use Sharpen AI’s Stabilize module to correct camera shake and the inevitable motion blur you get from fast-moving subjects.”

And down from that a good example image of a head of flying duck. That’s how it works, and works very good.

Try Focus mode it works better in situations where the subject is blurred.

Blur because of poor focus and motion blur are different, and require different algorithms. I’m on these plugins for >1.5 years, and know what works when. I’d post an example but not allowed to do so. Anyway, my example would be very similar to that duck head on the Topaz web site. This motion blur cannot be fixed in focus mode at all. Cheers.

Focus mode would be a poor choice in this case (as described) because it doesn’t handle motion blur well. On the other hand, Stabilize mode can also work well on non-motion blurred images, as it tends to create fewer artifacts.

I don’t see the relevance of what stabilize mode is used for when the discussion was about banding artifacts being introduced by GPU (but not by CPU). It’s clearly something that needs to be looked at and fixed as a priority.

That banding shows up in Stabilize mode only, hence the relevance.