I’m testing Adobe Dimension (Dn) as a possible option to create composites that mix 3D objects and 2D photos. Am working my way through their online tutorials - including the ones from Adobe MAX in the past week.

What’s the relevance for posting here?

I saw Dn has exactly the feature functions I expressed a wish for above that I hoped SAI would include with its Focus Model/Mode as a future gen feature!

In Dn, users go to the “Focus” function in the properties panel. Click the switch to “On” to activate it and open the associated tools. 2 tools are available. (1) A user clicks on the words “Set Focus Point” - then clicks with that activated functionality on the object in the scene where they’d like the primary focus area to be.

There’s an (2) associated Blur slider in that opened toolset too - users can leave the DoF as it is at far left or pull the slider to the right to add more blur in areas of the scene not covered by the focus pt placement. So, they’re essentially adding a bit of custom DoF.

It’s simplistic. There are essentially 2 focus areas. It’s not as sophisticated as the Depth Mapping in Topaz Lens Fx. But even that Set Focus Point tool - in SAI - would be a tremendous asset (IMO…) to the Focus Mode/Model. It would be controllable, customizable and would more greatly differentiate image appearance from the Sharpen mode/model (again, IMO…); especially if what Sharpening does is an overall edge sharpening.

I think that Dn feature is tremendously cool - as someone who does photog and a fair amt of compositing and not design/illustration or painting. I’d love something similar in SAI.

Anyway, food for thought for future feature wish-listing. See snip from the Dn interface (look in the righthand panel): 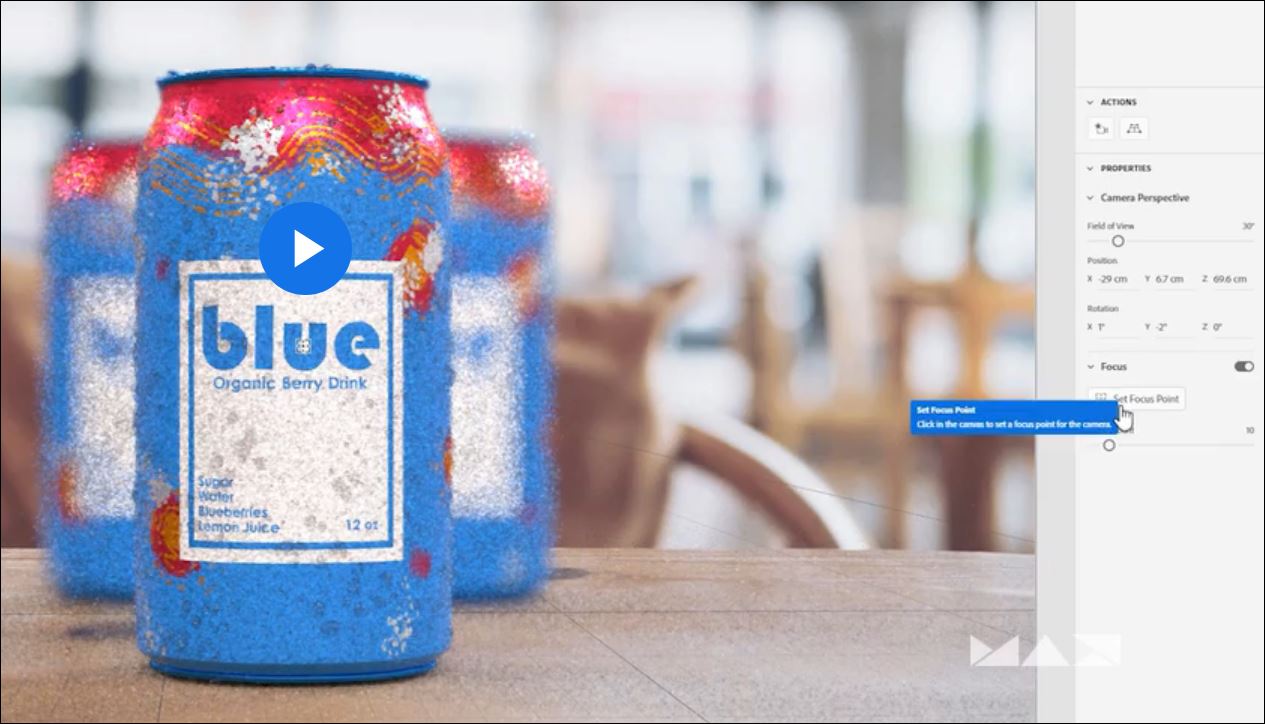 BTW - the 3 cans in the image are constructed from blank 3D models with 2D images & lighting features overlaid on them and the background scene is a 2D photo. Dn matches the perspective and direction of light for the 3D models to the 2D scene…

You also have access to the Focal Blur filter in Studio 2 if you need it now.

It was not a Dimension discussion. It was specifically a feature request to improve what I feel is a seriously lacking mode (Focus) in the SAI product. I never see any benefit or value from it. That’s why I specifically referenced Topaz Lens Fx as potentially having code that might help (from a depth mapping perspective applied to images to gauge their focus) and also pointed to the elegance and simplicity of the Dimension feature/interface for focus (which, frankly to me, looked reminiscent of the UI style that Topaz has converged on).